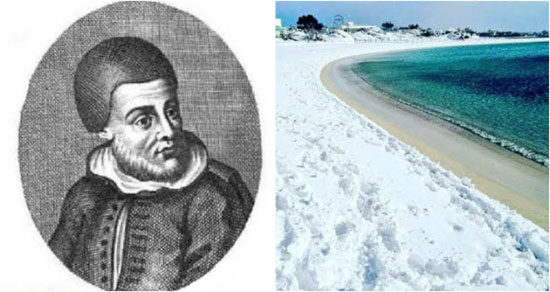 According to a prophecy from the “Italian Nostradamus”, Armageddon is just around the corner.
It all comes down to the snow that has been hitting Italian resort town Salento in January 2017.
Philosopher Matteo Tafuri, who lived between 1492 and 1582, warned that two consecutive days of snow in the town would lead to the apocalypse.
The region is known for its mild climate but has been left blanketed by icy falls in the beginning of the year.

Tafuri predicted: “Salento of palm trees and mild south wind, snowy Salento but never after the touch.
Two days of snow, two flashes in the sky, I know the world ends, but I do not yearn.”

In January, snow has blanketed some parts of southern Italy – leading some superstitious observers to believe Tafuri’s predictions will soon come true.

This revelation came just days after a picture of the Virgin Mary in Macedonia was spotted crying – a manifestation which has also been linked to the end of days.

Onlookers said the tears were first spotted on New Year’s Day, with worshippers pointing the teardrops out to their priest who has contacted representatives of the Macedonian Orthodox Church asking them to confirm the miracle.

The 16th-century French philosopher Nostradamus had also predicted that “017” would signal the collapse of America and a war triggered by global warming.