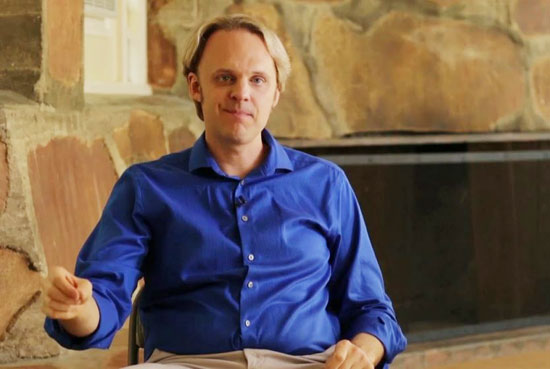 Then the Next Day, September 3rd….

Another post from the next day, September 3rd, embedded the word “DECLAS” with a simple numerical code into a statement about an upcoming meeting of Congress:

Where once there was [D-1]ARK

The obvious key to deciphering this is D-1, E-2, C-3, L-4, A-5, S-6, or DECLAS.
In previous communications, Q had used DECLAS to indicate that information would be declassified.

There are two possible meanings here. One is that information damning to both chambers of Congress will be declassified, and that this would shine “light” on that which is seen as “dark”.
Another possible meaning is that Congress itself would be involved in declassifying information that will somehow be damning to the Cabal.
Other briefings have since come in from Corey Goode’s sources saying that a major amount of damning new information is about to be leaked.


Then the Next Day, September 4th…

An image of this same DECLAS message was then brought back again the next day, September 4th.
This time another enigmatic phrase was added: “A Week to Remember”. This may refer to the week of September 10-16.
It is even possible that the Alliance wanted to time something around the anniversary of 9/11, which was on a Tuesday:
“Q !!mG7VJxZNCI No.184

A Week to Remember.

Plans like this often get thrown off and delayed by necessity, so I would not presume that any of us could know exactly when this “Week to Remember” will be.
The “Presidential” test of the Emergency Broadcast System didn’t appear until Thursday, September 20th.
Furthermore, it was the entire month of September that was declared “Emergency Preparedness Month” as we are about to see.

Then the Next Day, September 5th…

At this point we get the Q quote that Dr. Michael Salla used to argue that these mass arrests will involve military tribunals, not civilian cases:

Do you believe in coincidences?

You have more than you know.

EO stands for Executive Order. HRC is Hillary Rodham Clinton. Again, Dr. Salla’s article breaks this all down very nicely.
The bottom line is that an executive order was passed that will allow for the sealed indictments to be processed under military law.

Same Day: “What You Are About To Learn Should… Scare You”

This was followed by another message on the same day, clearly forecasting major events that will be unfolding in the near future:

What you are about to learn should not only scare you, but intensify your resolve to take back control [Freedom].

The information that will become public will further demonstrate the criminal & corrupt [pure evil] abuse of power that the Hussein administration undertook in joint efforts w/ domestic and foreign dignitaries.

The snowball has begun rolling – there is no stopping it now. D5.Stay the course and trust the plan.

Protective measures are in place.

We knew this day would come.

Another sign of “big stuff” getting ready to happen was one of the things Q said the next day, September 6th: 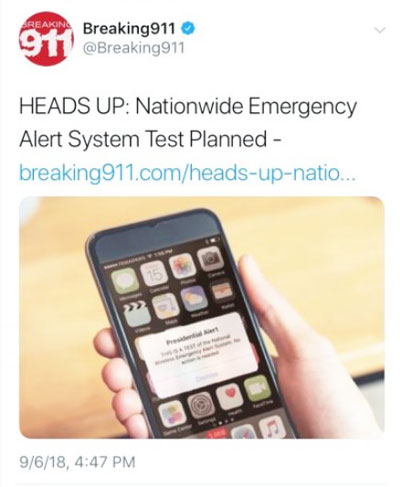 As we said earlier, the actual timing of this “Presidential” test was the afternoon of Thursday, September 20th, 2018.
The first-ever Q Anon post again said they would use the Emergency Broadcast System to bypass media censorship and tell us what is really going on.

Then, let’s combine this information with a post from Q Anon dating back to September 1st, as follows.
Among other things, we are again encouraged to “sign up for (emergency) alerts on mobile devices”:

National Preparedness Month is a time to focus our attention on the importance of preparing our families, homes, businesses, and communities for disasters that threaten our lives, property, and homeland.

During this time, we also honor the brave men and women who selflessly respond to crises and disasters, rendering aid to those in need.

These first responders, who work tirelessly to safeguard our Nation and protect our citizens, deserve our utmost gratitude and appreciation….

Tragedies are somber reminders that preparedness is a shared responsibility and that it is critical to maintain readiness.

All Americans can prepare for potential disasters by developing and practicing a family emergency response plan, assembling a disaster supply kit, signing up for alerts on mobile devices, setting aside emergency savings, and maintaining adequate insurance policies for their homes and businesses.

This month, I encourage all Americans to take the opportunity to ensure they have an emergency response plan in place and ready to be properly executed.

Emergencies and disasters test the resilience and strength of families, communities, and our Nation. It is impossible to avoid every challenge and threat, but we can and must prepare for them.

By doing so, we can help protect our communities and save lives.

I encourage all Americans, including Federal, State, and local officials, to take action to be prepared for disaster or emergency by making and practicing their emergency response plans.

Each step we take to become better prepared makes a real difference in how our families and communities will respond and persevere when faced with the unexpected….”

If You Are Thinking What I’m Thinking…

If you have read all of this and are thinking what I am thinking, then wow.
There are far too many arrows all pointing in the same direction for us to simply ignore this.
Hence I am writing this all up even though there is extremely bad, almost nonexistent internet access where I am now.
If Q Anon is actually doing a LARP here, (Live Action Role Play, i.e. lying for fun and attention) then this would destroy all the work, credibility and public attention they have built up over nearly a year.

Some of our audience loves this president and some despise him. I have heard the arguments from both sides in great detail.
Either way, I see how serious all of this is, and therefore feel there is a need to bring it to your attention.
If “nothing” happens, particularly by the end of the year, then it is safe to say Q will have been largely, if not completely discredited, as this is huge.
The need to write this up became even more obvious once I began looking at what other insider or alleged insider sources were saying about these same briefings.

Now For The Briefings Regarding The Satellites….

Here are a series of updates posted on the Hal Turner Radio Show website beginning the night the Q briefings about the satellites came out.
I have featured this website in the past. There are at least some cases where they got accurate intel that matched up with what other trusted sources said.
This article appears to feature intel that was coming in from people in the CIA, and it began with them freaking out that seven mainframe computers went down.
Admittedly, the exact timing of when the Q posts about the satellites first went up was as of 5:30 PM Eastern time, a little less than an hour before this article appeared:

Nonetheless, this article is a surprisingly fast response, and the Q Anon websites may not be updating readers on new posts right away.
All of this suggests that what we are reading may be based on insiders having real-time reactions to whatever was going on:

Seven mainframe computers inside the Central Intelligence Agency (CIA) are now offline for an unknown reason.
The loss of computing has also caused a significant number of US Spy Satellites to go offline.

We are in potential danger. I hope your vehicles have fuel and you have emergency food and water on-hand.
There’s no telling who did this or why… and now that some of our satellites are down, God only knows what may be coming at us.
Developing… check back for updates.

UPDATE 7:55 PM EDT —
Main Frames ‘Snow White’ 3, 4, 6 and 7 are offline.
Sats Offline include: Corona 1,4, 8, & 16 are dark.
(NOTE: CORONA SATS ARE THE DIGITAL ‘KEYHOLE’ REPLACEMENTS FOR THE ORIGINAL DECOMMISSIONED PROGRAM OF THE SAME NAME.)
Additional Sat. Offline: Big bird 9 — KH-9 (BYEMAN codename HEXAGON), commonly known as Big Bird[1] or Keyhole-9, was a series of photographic reconnaissance satellites launched by the United States between 1971 and 1986.

UPDATE 8:06 PM EDT —
Just spoke to the Pentagon. The official line is ‘I have no information about any such event. But if such an event were to occur, we would not discuss it publicly’.

BACK-CHANNEL INTEL —
Sources from the Intelligence Community now confirming to me several mainframes are, in fact, offline and several spy satellites are dark. Techs working furiously to find out what happened and fix it.
Internal assessment thinking is ‘Someone targeted our spy satellite systems specifically. Someone is now moving certain things they don’t want us to see being moved. This unexpected eventuality is major trouble on every level.’

GCHQ Bude, also known as GCHQ Composite Signals Organisation Station Morwenstow, abbreviated to GCHQ CSO Morwenstow, is a UK Government satellite ground station and eavesdropping center located on the north Cornwallcoast at Cleave Camp, between the small villages of Morwenstow and Coombe.
It is operated by the British signals intelligence service, officially known as the Government Communications Headquarters, commonly abbreviated GCHQ.
It is located on part of the site of the former World War II airfield, RAF Cleave.

UPDATE 8:33 PM EDT —
All kinds of Imaging & Communications Satellites have now been compromised as well… 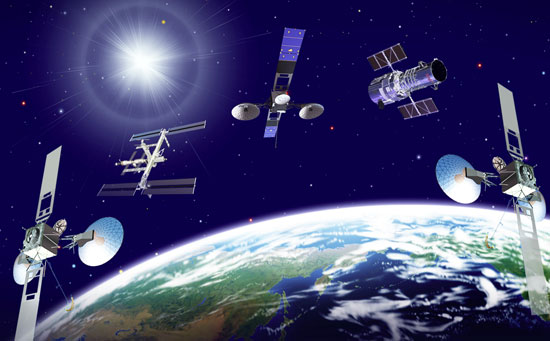 UPDATE 10:02 PM EDT —
We are now experiencing an almost complete blackout of most of our “Black-Ops” Signals Intelligence (SIGINT) and Satellite Communications (SATCOM) satellites.
CIA now unable to perform certain “key hole” surveillance, and there are now GIGANTIC holes in our ability to intercept various signals; i.e. certain phones, certain radios, certain internet coms, etc.
Put simply, certain people who previously thought they ran the world, (i.e. the Intelligence Community within CIA and NSA) are now deaf, dumb, and partially blind.
Something massive is taking place. Things like this don’t just happen.
Not sure where this is going, but whatever it is will be gigantic.

UPDATE 10:38 PM EDT FRIDAY 31 AUG. —
The CIA has been trying to restart the super-computer mainframes. They got three to re-start – and they immediately crashed again! Four others are simply not restarting at all.
SIGINT and SATCOM capabilities REMAIN SEVERELY COMPROMISED.
This is now just over 24 full hours that much of our Intelligence Community communications capabilities globally, REMAIN DEAD.”

Are You the Center of the Universe? Yes and No