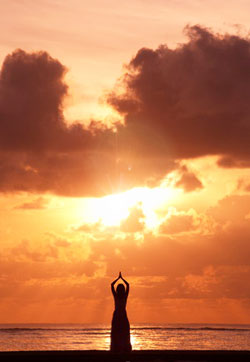 The human being can come close to and can enter into a deep spiritual communion with GOD the FATHER in any moment, through any type of beneficial activity, indifferent of its nature, if that human being consecrates that specific action (which is fundamentally good) to GOD the FATHER, as well as its fruits. In order to make a CONSECRATION to GOD the FATHER it is first necessary that the human being has an intense inner state of spiritual opening and humility. This spiritual attitude is in fact a fundamental key in any kind of inner spiritual practice. In the moment of offering the fruit of a certain action to GOD, when GOD receives this offering, which will be fructified afterwards through the action, basically that action is no longer performed by the human being, because the real author is then GOD himself, to whom the human being that made the consecration has offered Him entirely and unconditionally any kind of results. When a human being consecrates to GOD and when the CONSECRATION of the offerings of that action is received by GOD the FATHER, that human being is guided, inspired and directly sustained by GOD the FATHER. In such cases, the human being opens towards eternity and the infinity of GOD and then is able to experience, to a certain extent, a profound state of spiritual communion with GOD.

This is an essential spiritual aspect which, if we don’t forget and if we aim to accomplish our important actions during a day with this exemplary spiritual attitude or, in other words, by offering the fruits of all our actions we are about to perform to GOD, we will have the possibility to feel that our being enters then a state of ineffable communion with the eternal being, GOD. In that moment we become witnesses to the state of spiritual immortality, the state of eternal that GOD directly transfuses us, right after we do the CONSECRATION, when He agrees that we do that certain action. In this case, after we made the CONSECRATION we can feel that GOD manifests through us and in this way we can directly feel Him in our own being, His inspiration, force, grace, power and, what is most important, we will be then absolved from the effects of that action, which, if we hadn’t made the CONSECRATION, they would have returned to us. 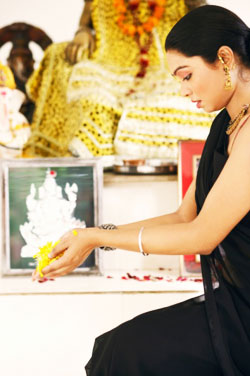 In order to better realize a CONSECRATION, we need to develop a state of total sincerity inside us, because when we have no hypocrisy and nothing to hide, we can really perceive the true answer that comes from GOD. It is important we realize that honesty is a basic condition, not something we should exhibit outside, this would be pointless. Actually this honesty refers to the inner attitude when we have nothing to hide from GOD in our heart. It is an inner attitude, which is often called honesty with your own being. As the matter of fact it is our own honesty, which is perceived as a living presence in our very inner universe. Therefore, having this state we could give GOD from our heart what we are about to do as action and this way we directly ask for His guidance, direction, in order to have the right answer for what we are about to accomplish or not. Through CONSECRATION we just offer entirely sincere to GOD as a gift the fruits that result from our actions.

In order to better understand the profound meaning of this spiritual attitude, let’s start from a very simple example, almost banal. Let’s say that, at a certain point, we wake up in the morning and decide to buy some milk for our mother. We get dressed, we take the money, take the bag, the bottles and we go out thinking: “The action I make now, its fruit, meaning the bottles of milk are for my mother and she will be very pleased that I woke up early to buy it. This action is not for me. Actually I don’t even like milk, and still I do it for my mother, because she loves milk and she will be very glad when she comes home. When she arrives home I will tell her: “Mom, I give you these two liters of milk, they are yours.” In this case, our very action to go out and buy the milk, and even the object itself, the milk that we bought is for pleasing our mother. The fruits of this action are hers; we think we did it for her. Also in this context we could be glad for our mom’s happiness, but this joy we feel is still hers.

Starting with this simple example – which we don’t necessarily need to identically transpose in our daily life (but we could find examples in different hypostasis of the life experiences we have had) – in a common daily event, we could analogically apply it to any life circumstance in which we intend to offer the fruits of our actions to GOD. Therefore, when we offer to GOD the fruits of a certain action, having in those moments the candour state of a child, we need to consecrate what is normally ours as an offer to GOD.

Naturally, if we consecrate this way, even without being aware of any sort of complicated metaphysical theories, even without any philosophical knowledge, even without a certain substantiation regarding the knowledge or the practice of a certain religion, even if we never studied a book about the relationship between man and GOD, even if we don’t know the meaning of KARMA or other oriental concepts, even if we don’t have a clear and firm faith in GOD, if we sincerely proceed in this way, we will notice something amazing, miraculous taking place in our being. Therefore, in order to apply this fundamental attitude of CONSECRATION, we don’t need to be any philosophers, meta-physicists; we don’t need to have any knowledge of the oriental and occidental religious concepts, we just need to have a state of inner lucidity and act in an extremely simple manner.

Through this honest state we manifest, offering, full of love, to GOD the results of our actions, we will perceive inside us an ineffable state of communion with something that goes beyond us in dimension and subtlety. It will manifest as a charging by a subtle, transcendent, ecstatic flow that generates happiness and inner joy, which always manifests from top to bottom in our being. Usually, we feel this ineffable answer as coming from somewhere above the crown area of our head, flooding our being and thus making us almost instantaneously enter a superior state of consciousness full of happiness, a state of vibration which is highly superior to other states of our daily life. Therefore, this is an exceptional state, a wonderful state of mind.

The CONSECRATION of the fruits of a certain action to GOD the FATHER has three immense advantages for the initiates:

The first advantage: The CONSECRATION of the fruits of our actions allows us in the moment of receiving the answer to figure out with anticipation if what we intend to do is, according to the mysterious consciousness of GOD, good or bad, and in this way it allows us to avoid with anticipation the evil we were not aware it was to come as a consequence of our action. If the answer is affirmative, this is in the same time revealing to us the mysteries of GOD’S goodness every time. This way we learn something about the mysteries of GOD’S goodness within each CONSECRATION of fruits to which we receive an affirmative answer. 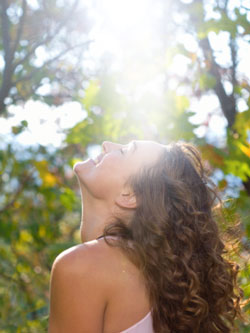 The second advantage: When the answer to the CONSECRATION we just made is a positive, affirmative one, it means that that specific action which is we are about to make is, without any doubts, good in the eyes of GOD the Father. In that particular case, the good action we are about to make never implies the appearance of a good “chain” to still chain us in order to make us necessarily come back to receive the fruits which that specific action imply, no matter if we want it or not, as in the case of the good fruits of an action which is not detached. In this way, we are no longer chained by the law of cause and effect or, in other words, by the Law of Karma. This initiatic aspect has an immense value especially for those who realize its great importance. For this particular reason we can say that in reality the CONSECRATION of the fruits of our action to GOD the Father is, without any doubt, an essential spiritual and religious method. Although it appears to be simple and accessible to anyone, despite their religion, the CONSECRATION of the fruits of the actions to GOD is and remains at the same time an essential planetary revelation, especially to those who constantly understand it and practice it.

The third advantage: This is the most important one and it can be discovered only by the ones who hold the necessary gram of practice in this direction. Therefore, we could say that you can become a master in the art of spiritual CONSECRATION only by practicing it perseveringly. This is valid only in the situation when we receive an affirmative answer in the end, at the respective CONSECRATION, which is at the same time revealing to us the fact that our action is good without any doubt, according to the mysterious Will of GOD. When we receive an affirmative answer to our CONSECRATION, in which the fruits were unconditionally offered to GOD, for the action that is performed by GOD afterwards through our being, we experience this way in a hidden way each time (when we do a certain action or deed with CONSECRATION) the ineffable, mysterious condition of a spiritual liberated person alive. (JIVANMUKTA). Therefore, when an action or deed is done with CONSECRATION of its fruits to GOD, the one that acts in and through our being in a mysterious way is GOD the FATHER.

In the light of this revelation we can realize that when a certain action or deed is performed through our being due to the CONSECRATION of its fruits, we become at the same time the amazed and detached witnesses of everything that GOD does in our being in every moment. In this way we can say that in the case of any action or deed which is performed with CONSECRATION of its fruits, we can learn each time extraordinarily much from everything that GOD is performing in and through our being when He acts in and through us, in order to fulfil that action or deed of which fruits only belong to Him. In the light of these revelations we can easily realize that when we have doubts concerning how good a certain action could be for us, we can clarify it to begin with, with the help of GOD, doing beforehand a CONSECRATION of the fruits of that specific action to GOD the FATHER. Then, according to the answer we perceive we can understand if that certain action we intend to do is good or not, from GOD the FATHER’s mysterious point of view.

The archetypal state of child