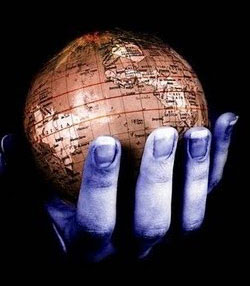 Globalism presents a conception of space, in which billions of people fit into their “best slots”. That’s the theme. That’s the construct. Of course, its proponents and bosses sell it as if the world couldn’t exist in any other form.

All “ism-s” operate in this fashion. Once the definition is laid down, the fictional field is laid out, and people are urged to navigate to their places. “If you don’t, dire things will happen.”

People aren’t generally aware of fictional spaces and their psychological impact. Therefore, they go along.

This is why a museum can be so instructive. A thousand paintings, each with its own area. We’re not talking about a place on a wall, we’re talking about interior space, which the artist invents and shapes on the canvas.

With Globalism, the space is all about establishing control and distribution points for goods and services. It’s about erasing borders and nations. It’s about co-opting the notion of a unified planet, in order to broadcast fake cheesy messages of universal “share and care”. It’s about every individual “having his place”.

When one begins painting, one of the first things he/she notices is the abundance of space on each canvas. Waiting to be shaped. The psychological carry-over can be enormous. The notion of “fitting into a position in life” can be disintegrated. It can stop making any sense and having any impact.

Globalism is a hustle in a long, long line of planetary hustles. It erects a space and claims it is the future for all. It’s a minor, minor painting by a group of minor artists, hardly worthy of a spot on the wall of a second-rate museum.

If we were living in a reasonably aware society, many people would be asking themselves: “What space do I want to invent, and for what purpose?”.

Which of course takes things back to the individual and his inner resources. And away from overarching ideologies with their perverse themes. 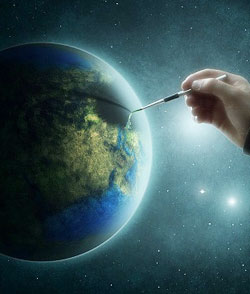 If you were a painter, what would you paint? That question is a lot like asking: if you could invent your future and all the space that comes with it, what would you do?
To come up with an answer, you don’t need any of the GPS reference points of Globalism. They would only be a hindrance.
They would be delusions, masking your power.

“Some even believe we are part of a secret cabal working against the best interests of the United States, characterizing my family and me as ‘internationalists’ and of conspiring with others around the world to build a more integrated global political and economic structure – one world, if you will. If that is the charge, I stand guilty, and I am proud of it.” David Rockefeller, Memoirs, 2003

The man who wrote those words represents a family that has dominated banking, oil, modern medicine, behind-the-scenes politics, and powerhouses of Globalism (e.g. the Council on Foreign Relations) for a century.

Globalism asserts that no nation can be independent from “the family” of other nations, as if it were a matter of fact beyond dispute. A nation claiming its sovereignty thus becomes a lunatic traitor to the natural order of things.

What really binds nations to one another is propaganda, and treaties which are based on the same propaganda, resulting in engorged super-profits for mega-corporations.

Globalism is a secular piece of messianic hype. A Disney-esque altruism is the prow of the ship. Spend 10 minutes educating any street hustler on Globalist principles, and he would recognize it as a standard con.

Obama’s warning to the Brits, that their withdrawing from the Globalist European Union would put them at the back of the line in negotiating a separate trade treaty with the United States, was sheer fiction.

Britain, or any nation, that has goods to sell and a desire to buy will find trade partners. An agreement could be scratched out on a napkin over dinner.

Impending trade deals like the TPP and TTIP are thousands of pages and take so long to negotiate, because the heavy hitters at the table are looking for new ingenious ways to cut and paste the world into larger profits for themselves. 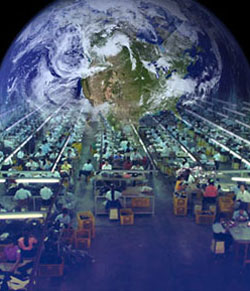 Globalism, hiding behind thousands of academic analyses, picks up jobs from one nation, where wages are reasonable and working conditions are tolerable, and dumps them in hell holes where wages are nearly invisible and conditions are poisonous. It’s that simple, and any moron could see how the job-exporting nations would suffer… if by nations we meant people. Instead of criminal corporations and criminal investors.
But all this is layered over with “share and care” sop.

The United States government could repeal the NAFTA, CAFTA, and GATT trade treaties tomorrow, and throw current TPP and TTIP negotiating documents out the window… and all would be well. Better.