History tells us that the Spanish Flu in 1918 killed between 50-100 million people. It was considered as the most horrifying disease by medical and pharmaceutical sources. It is a wartime myth still being perpetuated to coverup the experimental military vaccines which killed millions during the Spanish Flu. 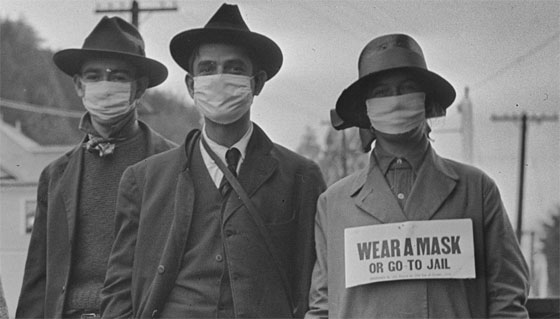 Eleanor McBean, PhD, N.D., the author of ‘Vaccination Condemned’, describes her personal and family experiences during the 1918 “Spanish Flu” pandemic in detail in her book. The coverage by McBean who is an unvaccinated survivor will let you revisit this historical event. McBean provides evidence that the historical events of the 1918 “Spanish Flu” were compromised. The same was done with the Polio and Swine Flu epidemics and which is also being done now with Covid.

Myth of the Spanish Flu

Since Spain was neutral during World War 1, it did not hesitate to report the 1918 Flu epidemic, unlike the combatting countries. So, Spain was ‘scapegoated’ as the source and hence the name ‘Spanish Flu’ was coined.

A massive military vaccination experiment was conducted in Fort Riley, Kansas – where the first “Spanish Flu” case was reported. For the first time the pharmaceutical industry got the supply of human test subjects which was sponsored by Rockefeller Institute for Medical Research. The US military supplied a pool of 6 million men as test subjects for the vaccination experiments.

WW1 U.S. soldiers were given 14 – 25 untested (!), experimental vaccines within days of each other, which triggered intensified cases of ALL the diseases at once.

The doctors called it a new disease and proceeded to suppress the symptoms with additional drugs or vaccines.

Autopsy done after the war proved that the 1918 flu was not a ‘flu’. It was instead the disease caused by the experimental ‘bacterial meningitis vaccine’ which was given to the people. This disease mimics the symptoms just as flu. A large number of vaccinated soldiers were killed by this experimental vaccine and those who were not vaccinated were not affected.

But what about the civilians?

Huge quantities of unused experimental vaccines were left unused as WW1 ended abruptly. The US government started the campaign of spreading fear among the civilians saying that when the soldiers will return to their families the disease will spread to the family members as well. And by doing this they succeeded in using tens of millions of civilians as test subjects for experimental vaccines. As a result millions of civilians died after wartime, just as the soldiers did.

Hence instead of reducing the risk, it intensified the situation and it was termed as the great ‘Spanish Flu of 1918’ in which only the vaccinated died. “Seven men dropped dead in a doctor’s office after being vaccinated. Letters were sent to their families that they had been killed in action.” – Eleanor McBean, Minnesota Wellness Directory.

COVID-19: an overview of the evidence

Conspiracies, false flags, and problem-reaction-solution – they’re all real, and…