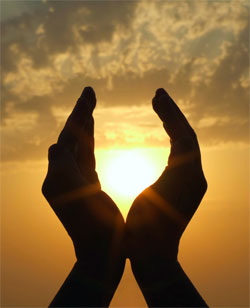 To consecrate means to offer something, sincerely, totally and unconditionally, to God, in order to sanctify that “something” through a mysterious communion with God. To avoid any confusion, we emphasize that in order to do a consecration and to consecrate something in particular to God, no specific ritual must be performed, nor is there a need for a priest to perform this consecration, just as there is no need for a priest to do a blessing. The consecration is not a religious ritual act, but a procedure that any human being can approach in order to deepen their direct relationship with God the Father, in the same way that every human being can pray directly to God and does not need any intermediary for this.

The consecration of the fruits of the actions to God the Father is the fundamental method from which the practice of the KARMA YOGA system starts. The effects that appear when we consecrate the fruits of a certain action to God the Father can be understood by analogy with the phenomena that occur when in the religious ceremonies commemorating those who have left the physical plane, they are consecrated certain foods: funeral cake, sweet bread, etc. It is not by accident that it is traditionally said that “you never tire of the food of alms”. This is generally also the “mechanism” of the offerings that are given in some rituals known in different religions and traditions of the different deities (gods), in order to attract their grace and to obtain certain favours.

Unlike the external ways of giving offerings, the consecration of the fruits of our actions to God the Father is a purely internal act. It is more than symbolical, as it represents an effective and sometimes considerable sacrifice on the part of the human being who does it. In fact, we can consecrate to God not only the fruits of our actions, but also anything else we feel to offer, in our enthusiasm, full of love and devotion towards Him: ourselves, our life, our planet, our wonderful and harmonious relationships, but also time, space, certain objects, offerings of light, etc. However, as we will discover from practice, beyond the significance and effects of other occasional consecrations, what is most important and matters the most is to consecrate to God, in advance, the fruits of our actions. Because in this way different divine laws come into action, which operate together towards our inner transformation. We can give EVERYTHING to God, and He will choose what He receives from our “offerings”. 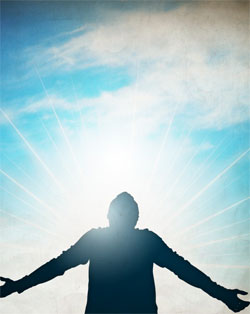 Before we begin a certain important action, the fruit of which we intend to offer in advance to God the Father, we must actually do a consecration, which we will consider with due seriousness as a sui-generis meditative act by which we offer God all the fruits of that action, before we begin it. For a proper and successful consecration, it is necessary for us to internalize our attention very well, to calm our mind, to enter a state of high receptivity on the background of a state of neutrality (deep peace at the emotional and mental level). Only if all these conditions are met simultaneously can we say that we are ready to do a consecration. A successful consecration is not necessarily a consecration in which we feel the answer, but one in which we are open to feel God’s answer (and accept the possibility that the answer does not appear). Also, the way in which we offer the fruits of our actions need be truly sincere, unreserved, and completely open.

From all the above considerations, we deduce that a true consecration is never done “on the go” nor is it limited to “saying the words”. The consecration is a genuine and unique dialogue with God, and it should not be treated with superficiality, inattention or haste. On this direct and privileged path, nobody expects us to be perfect from the very beginning and be able to simultaneously meet all these aforementioned conditions (which, for the vast majority of the yogis, require a serious, systematic and extended practice). Therefore, even if we cannot meet all these conditions from the very beginning, we will proceed in a systematic, progressive and gradual manner, taking into consideration the following aspects:

● it is essential to have the sincere intention to offer God the fruits of our deeds and to offer them to Him in this way, totally and unconditionally;
● we must have at least a minimum curiosity or openness to perceive the answer that appears in a distinctive and nuanced way and highlights the way in which God receives that consecration;
● we must permanently seek to deepen this unique dialogue with God, to track the progress that appears over time in our consecrations, to never forget that it is a field in which there is always room for better and we still have a lot to learn;
● it is recommended that we periodically revise the basic ideas and see to which extent we possibly forgot them or to which extent we begin to understand them differently, in the light of our experience;
● we will never do the consecration as a purely mechanical act, because only what we truly intend to do then is of value!
● let’s not rush! Even if sometimes it is better to do the consecration quickly, rather than not do it at all. Still, we shouldn’t make a habit of it. 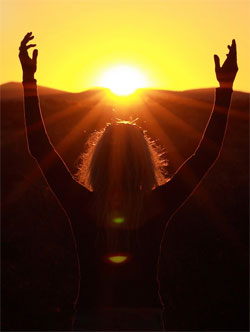 In order to do the consecration, we will sit (when appropriate or we have the possibility) or stand, preferably facing the magnetic north (when possible), keeping the spine straight. With our eyes closed, we internalize our attention, we relax as best we can, we eliminate any parasitic thoughts and smile slightly, to relax and induce a state of self-transfiguration. Focusing our attention simultaneously upon the area in the centre of the chest and the area above the top of the head, corresponding to the location of the secret centres of force ANAHATA CHAKRA and SAHASRARA, we begin by mentally saying the prayer “Lord God, have mercy on me!”, in a transfiguring way. We repeat this short prayer 21 times (or maximum 27 times). We will immediately notice a much better state of internalization and transfiguration, a more sincere and direct relation to God. We are now ready to begin the consecration itself.

Next, on a background state of aspiration and love for God, we say, firmly and sincerely: “Lord God, Heavenly Father, I offer You here and now, totally and unconditionally all the fruits of this action …” (it is important to explicitly mention the action we intend to do, to be as aware as possible). Then we remain internalized, on a background of mental peace and high receptivity, aiming to perceive the states that appear immediately. Moreover, we seek to remain immobile, in a sui-generis state of inner stillness, in which, by turning our inner gaze in convergence toward the top of the head, we are extremely attentive to all the phenomena that appear in our inner universe.

When we consecrate to God the Father the fruits of a good deed, which does not contradict the divine laws, we can objectively tell that a certain very special state appears at this stage, something that obviously comes from outside ourselves and always from above. We will generically identify all these phenomena that appear immediately as God’s answer to our consecration. They prove that He accepts our consecration, agrees to our acting that way and supports us in this direction. When we receive this affirmative answer, we will act accordingly; on the other hand, if this answer does not appear, it is imperative that we do not do that action. From the occult point of view, the effects of consecrating the fruits of a certain action are valid 24 hours. If we surpass 24 hours and the action has not ended yet, it is necessary for us to do the consecration again. 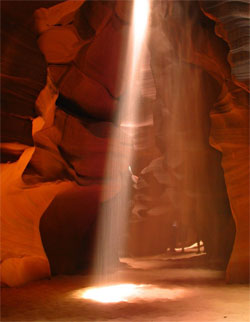 Regarding the answer to the consecration, yoga professor Gregorian Bivolaru details the following aspects: this answer is always descending and consists of two distinctive phases (or “waves”). In a first phase, we will perceive the bestowing of the energy specific to the godly attribute of holiness (sacredness) – this is a “forerunner wave” and is always followed by a “second wave” in which the specific energies of various godly attributes manifest, strictly correlated with our intentions and with the action whose fruits we consecrate to God the Father. Among other things we will notice then, we mention the activation of the superior force centres: SAHASRARA, AJNA CHAKRA, VISHUDDHA CHAKRA, ANAHATA CHAKRA and (more rarely) MANIPURA CHAKRA. Frequently, the secondary force centre SOMA CHAKRA can be dynamised.

Careful and persevering practice is required for a better understanding of these aspects. We will thus notice that two answers to consecration are ever totally identical, not even when we do two consecrations for the same action, or when we consecrate similar actions, at different moments of time. What all the “affirmative answers” have in common, the ones that show God’s approval, the consent that gives us permission to act and creates the divine integration of that action, is the manifestation of the attribute of godly holiness. This is otherwise natural, if we remember that in essence the purpose of consecrating the fruit of an action to God the Father is the sanctification or in other words the sacralising of that action. That is why, the first “wave” that manifests itself as an answer to the consecration consists of the bestowing of the attribute of godly holiness in our entire being, from up downwards. This also has a simultaneous effect upon the environment in which we are then, sanctifying it. We will surely perceive differences in intensity of this first wave. In the second “wave” of the answer, even greater differences will appear, as various godly attributes will manifest, depending on the situation: will-power, detachment, enthusiasm, perseverance, compassion, love, altruism, generosity, etc.

“The answer to the consecration is a state of paranormal fluidity that makes you feel that you are divinely integrated. A range of easily perceivable phenomena appear, showing that God is with you: an energy flow, the state of enthusiasm, and various synchronicities. The consecration is a very fine barometer, which allows you to feel how God receives the fruit you offer Him. From the intensity you feel, you can tell how enthusiastic God is about what you do. If the intensity of the answer is lower, you can immediately tell.” – yoga professor Gregorian Bivolaru

The Feminist Seduction of Western Society

Mobile devices rewire your brain, turning you into a reward addict who craves more food

Tenacity and perseverance are two essential qualities in spiritual practice

5 Great Benefits Kids Can Get From Yoga

Relieve pain caused by tight hips with these 10 hip stretches

Why kids need yoga: the benefits of yoga for children