Sir Isaac Newton, one of the most famous scientists of recorded history, left behind a large body of work that is still vital in our understanding of the world today. However, as with many public intellectuals, he also had plenty of work that was never shared with the public, even after his death. 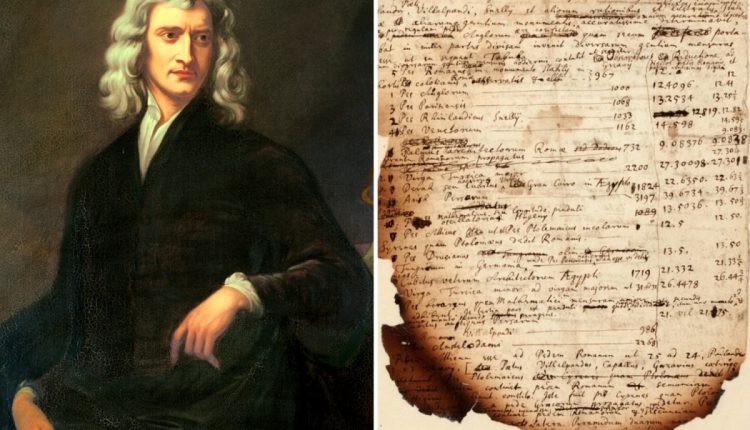 Now, for the first time ever, some of these unpublished notes have been auctioned off, and these notes contain some of his most wild theories, and includes his thoughts on the occult, alchemy, and biblical apocalypse theory. Newton was known to dabble in the more esoteric realms of study, but very little written evidence remains about his specific thoughts on mystical topics.

Some of the remaining manuscript notes were auctioned by Sotheby’s. The notes have been through a lot, and are obviously burned. The auctioneers claim that the notes were damaged in a fire that is believed to have been started by a candle that was accidentally toppled by Newton’s dog, Diamond.

According to the auction listing, “These notes are part of Newton’s astonishingly complex web of interlinking studies – natural philosophy, alchemy, theology – only parts of which he ever believed were appropriate for publication. It is not surprising that he did not publish on alchemy, since secrecy was a widely-held tenet of alchemical research, and Newton’s theological beliefs, if made public, would have cost him (at least) his career.”

The notes were sold by Sotheby’s auction house on December 8, 2020 for nearly $500,000 (£378,000). In the notes, Newton speaks on some far-out topics that would surprise modern thinkers. For example, Newton’s notes include a theory that ancient Egypt’s Great Pyramid of Giza predicted the apocalypse. While it is unclear what logic he used to get to his conclusion, the theory began with his study of how the pyramids were designed according to an ancient Egyptian unit of measurement called “the royal cubit”.

While studying the pyramids and the cubit, Newton believed he developed an insight into sacred geometry, which somehow aligned with the apocalypse predictions in the bible. “He was aiming to find proof for his theory of gravitation, but in addition the ancient Egyptians were thought to have held the secrets of alchemy that have since been lost. Today, these seem disparate areas of study – but they didn’t seem that way to Newton in the 17th century,” Gabriel Heaton, Sotheby’s manuscript specialist, told The Guardian. “It’s a wonderful confluence of bringing together Newton and these great objects from classical antiquity which have fascinated people for thousands of years. The papers take you remarkably quickly straight to the heart of a number of the deepest questions Newton was investigating,” Heaton added.

Interest in alchemy and mysticism was not unusual for serious scholars at the time, in fact, it was recognized as a legitimate field of scientific study. “The idea of science being an alternative to religion is a modern set of thoughts. Newton would not have believed that his scientific work could undermine religious belief. He was not trying to disprove Christianity – this is a man who spent a long time trying to establish the likely time period for the biblical apocalypse. That’s why he was so interested in the pyramids,” Heaton said.