A new animal study by a group of European researchers has found that low levels of the weed killing chemical, glyphosate, and the glyphosate-based Roundup product can alter the composition of the gut microbiome in ways that may be linked to adverse health outcomes. 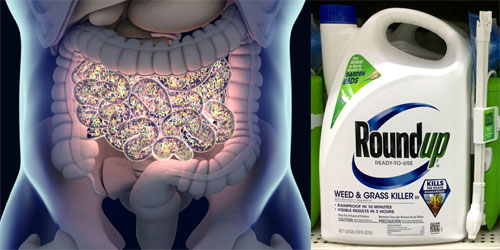 The paper, published in the journal Environmental Health Perspectives, is authored by 13 researchers, including study lead Dr. Michael Antoniou, head of the Gene Expression and Therapy Group within the Department of Medical and Molecular Genetics at King’s College in London, and Dr. Robin Mesnage, a research associate in computational toxicology within the same group. Scientists from the Ramazzini Institute in Bologna, Italy, participated in the study as did scientists from France and the Netherlands.

The effects of glyphosate on the gut microbiome were found to be caused by the same mechanism of action by which glyphosate acts to kill weeds and other plants, the researchers said.

The microbes in the human gut include a variety of bacteria and fungi that impact immune functions and other important processes, and a disruption of that system can contribute to a range of diseases, the researchers said. “Both the glyphosate and the Roundup did have an effect on gut bacterial population composition,” Antoniou said in an interview. “We know that our gut is inhabited by thousands of different types of bacteria and a balance in their composition, and more important in their function, is crucial for our health. So anything that disturbs, negatively disturbs, the gut microbiome… has the potential of causing ill health because we go from balanced functioning that is conducive to health to imbalanced functioning that may lead to a whole spectrum of different diseases.”

The authors of the paper said they determined that, contrary to some assertions by critics of glyphosate use, glyphosate did not act as an antibiotic, killing off necessary bacteria in the gut.

Instead, they found – for the first time, they said – that the pesticide interfered in a potentially worrisome way with the Shikimate biochemical pathway of the gut bacteria of the animals used in the experiment. That interference was highlighted by changes in specific substances in the gut. Analysis of gut and blood biochemistry revealed evidence that the animals were under oxidative stress, a condition associated with DNA damage and cancer.

The researchers said it was not clear if the disturbance within the gut microbiome influenced the metabolic stress. The indication of oxidative stress was more pronounced in experiments using a glyphosate-based herbicide called Roundup BioFlow, a product of Monsanto owner Bayer AG, the scientists said.

The study authors said they were conducting more studies to try to decipher if the oxidative stress they observed was also damaging DNA, which would raise the risk of cancer. The authors said more research is needed to truly understand the health implications of glyphosate inhibition of the Shikimate pathway and other metabolic disturbances in the gut microbiome and blood but the early findings could be used in the development of bio-markers for epidemiological studies and to understand if glyphosate herbicides can have biological effects in people.

In the study, female rats were given glyphosate and the Roundup product. The doses were delivered through the drinking water provided to the animals and were given at levels representing the acceptable daily intakes considered safe by European and U.S. regulators. Antoniou said the study results build on other research that makes it clear regulators are relying on outdated methods when determining what constitutes “safe” levels of glyphosate and other pesticides in food and water. Residues of pesticides used in agriculture are commonly found in a range of regularly consumed foods. “Regulators need to come into the twenty-first century, stop dragging their feet… and embrace the types of analyses that we have done in this study,” Antoniou said. He said molecular profiling, part of a branch of sciencenknown as “OMICS”, is revolutionizing the base of knowledge about the impacts chemical exposures have on health.

The rat study is but the latest in a series of scientific experiments aimed at determining if glyphosate and glyphosate-based herbicides – including Roundup – can be harmful to humans, even at levels of exposure regulators assert are safe.

Several such studies have found an array of concerns, including one published by researchers from the University of Turku in Finland who said that they were able to determine, in a “conservative estimate,” that approximately 54 percent of species in the core of the human gut microbiome are “potentially sensitive” to glyphosate.

As researchers increasingly look to understand the human microbiome and the role it plays in our health, questions about potential glyphosate impacts on the gut microbiome have been the subject not only of debate in scientific circles, but also of litigation.

Last year, Bayer agreed to pay $39.5 million to settle claims that Monsanto ran misleading advertisements asserting glyphosate only effected an enzyme in plants and could not similarly impact pets and people. The plaintiffs in the case alleged glyphosate targeted an enzyme found in humans and animals that bolsters the immune system, digestion and brain function.

Bayer, which inherited Monsanto’s glyphosate-based herbicide brand and its glyphosate-tolerant genetically engineered seed portfolio when it bought the company in 2018, maintains that an abundance of scientific study over decades confirms that glyphosate does not cause cancer. The U.S. Environmental Protection Agency and many other international regulatory bodies also do not consider glyphosate products to be carcinogenic.

But the World Health Organization’s International Agency for Research on Cancer in 2015 said a review of scientific research found ample evidence that glyphosate is a probable human carcinogen.

Since that time, Bayer has lost three out of three trials brought by people who blame their cancers on exposure to Monsanto’s herbicides, and Bayer last year said it would pay roughly $11 billion to settle more than 100,000 similar claims.