Pope Francis, once again, calls for a New World Order and ‘universal vaccines’

In an April 4 letter which he sent to the Spring 2021 virtual meeting of the World Bank and the International Monetary Fund (IMF), Pope Francis officially called for a new system of “global governance” and “universal vaccines” to cure the Wuhan coronavirus (Covid-19) and other pressing “problems.” 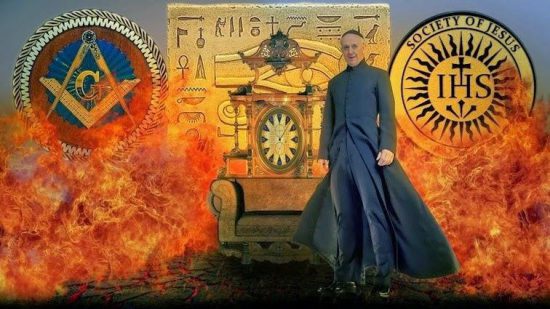 The letter, which only mentions “God” once, talks about the pressing need to “confront a series of grave and interrelated socio-economic, ecological, and political crises.”

It mentions vaccines three different times while segueing in and out of topics related to “climate change.” “We are, in fact, in debt to nature itself, as well as the people and countries affected by human-induced ecological degradation and biodiversity loss,” Francis claims.

Replete with language that sounds as though it was ripped right from the pages of World Economic Forum (WEF) head Klaus Schwab’s “Great Reset” manifesto, Francis’ letter advocates for a “green financial agenda” to replace the current financial system. Throughout his eight-year tenure as pope, Francis has addressed the WEF directly on four separate occasions.

He also allowed the Vatican to hold a roundtable event at WEF’s annual Swiss conference site in Davos. Francis would like to see “a justly financed vaccine solidarity” – meaning “equitable” vaccine distribution for the Chinese virus worldwide – in order to fulfill “the law of love and the health of all.”

Francis also mentions in his letter the secular fraternity outlined in his recent encyclical Fratelli Tutti:

“Here, I reiterate my call to government leaders, businesses and international organizations to work together in providing vaccines for all, especially for the most vulnerable and needy,” Francis writes.

Just prior to the letter’s issuance, Francis issued a call for a “new world order,” arguing that the world should operate under a single globalist system of governance.

“There remains an urgent need for a global plan that can create new or regenerate existing institutions, particularly those of global governance, and help to build a new network of international relations for advancing the integral human development of all peoples,” he maintains.

Not once is Jesus Christ mentioned in Francis’ letter, nor is the Roman Catholic Church. The letter’s last line mentions “God” in a casual sign-off from the other topics that dominate its contents.

Under Francis’ proposed “model of recovery” from the Chinese Virus, world governments should seek to generate “new, more inclusive and sustainable solutions to support the real economy … and the universal common good.”

The world must not, Francis says, “return to an unequal and unsustainable model of economic and social life, where a tiny minority of the world’s population owns half of its wealth.”

One way world leaders can accomplish this, Francis says, is to eliminate the debt burden on the world’s “poorest nations.”

“Relieving the burden of debt of so many countries and communities today is a profoundly human gesture that can help people to develop, to have access to vaccines, health, education and jobs,” he says.

According to Eric LeCompte of the Jubilee USA Network, 56 percent of all countries in the world are either already in a debt crisis or are on the verge of one.

African nations are suffering the most, with 14 of them vulnerable to default and nine others already in default or on the verge of it. “Because of the debt trap and the pandemic, we’re facing the worst losses in development in the last 50 years,” LeCompte is quoted as saying.

Asymptomatic transmission of COVID-19 didn’t occur at all, study of 10 million finds