Scientists think they have found a portal to the 5th dimension

In brief:
• The Facts: A new study claims to have found an explanation for dark matter, but relies on the discovery of a particle which leads to another dimension.
• Reflect On: How do discoveries shift our understanding of reality and perhaps, who we are? Can a journey down the rabbit hole of non-material science cause understanding of the nature of human consciousness that can shift how we live our lives? 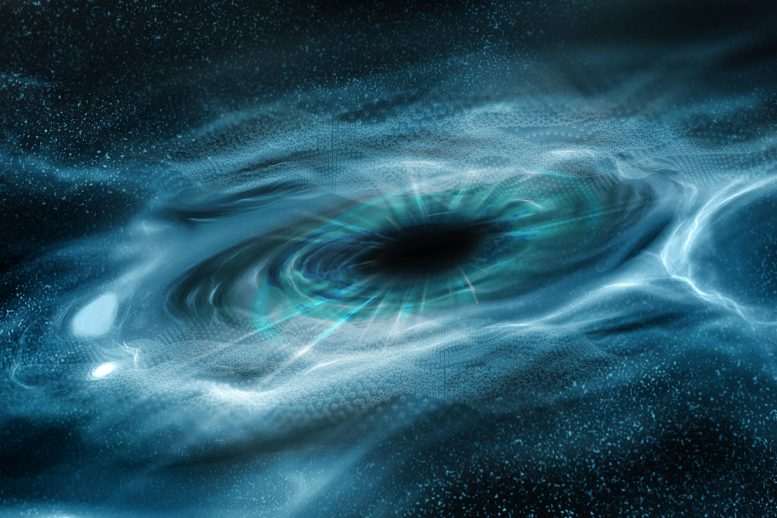 It sounds like science fiction a little bit, but our world is a lot more mysterious and fascinating than much of our mainstream news and information lets on. A quick tour down the lane of post-material science returns many fascinating discoveries about superhuman abilities, extrasensory perception, remote viewing, non local consciousness and more. In short, we are extraordinary, and science has shown this, even though mainstream culture lags behind in opening up to these ideas.

In a new study published in The European Physical Journal C (EPJ C) scientists were proposing that there exists a particle that can act as a portal to a fifth dimension. What exactly is the 5th dimension? Good question. Let’s start with what we know now about dimensions. To scientists there has been four known dimensions in our universe. Three that make up space (up and down, left and right, back and forth) this gives you “3D,” and the fourth dimension is time.

To understand the 5th dimension, we have to begin looking into dark matter, which is what scientists believe make up most of the mass in our universe. Dark matter occurs to be something we don’t know too much about as well. We technically can’t see it, and so scientists measure what effects its mass has on other observable matter. In the most recent study the authors – Adrian Carmona, Javier Castellano Ruiz, Matthias Neubert – said their original intention was to “explain the possible origin of fermion (particle) masses in theories with a warped extra dimension”.

They sketched out a new scalar associated with the fermion, which they claim is similar to the Higgs field and Higgs boson particle. “We found that the new scalar field had an interesting, non-trivial behaviour along the extra dimension,” the researchers told VICE. “If this heavy particle exists, it would necessarily connect the visible matter that we know and that we have studied in detail with the constituents of dark matter, assuming the dark matter is composed out of fundamental fermions, which live in the extra dimension.”

The authors described the particle as “a possible new messenger to the dark sector”.

The hard working was just beginning however. Scientists had to isolate this particle. The Higgs boson particle mentioned above was spotted by the Large Hadron Collider (LHC), the world’s largest and most powerful particle accelerator. However it is not powerful enough to find this new particle and thus a new device would have to be created.

What intrigued people about this story was one of the statements physicists made about a new study they wrote exploring the potential of a 5th dimension: “This new particle could play an important role in the cosmological history of the universe, and might produce gravitational waves that can be searched for with future gravitational-wave detectors.”

It has always been a fascination to explore the deeper perennial questions that make up our current collective paradigms. As we understand more about the nature of the reality, the cosmos, and our relationship to it, we in essence are developing a greater understand of who we are.

The research over the years has taught that many of the mainstream assumptions we make about ourselves and our world are likely false. Issues like “consciousness originates in the brain” or “our consciousness cannot affect particles non-locally” or “that the universe is random, and human consciousness cannot impact it.” From the many studies which explored these subjects, the basic assumptions of modern materialist science simply don’t hold water when considering hundreds of studies telling a different story.

When you consider the paradigm shift that comes in realizing that our human consciousness may in fact have the ability to affect particles non locally, something seen through hundreds of ‘intention experiments’ rigorously studied around the world, one has to think: “what is the true nature of our reality and who we are? Are we a lot more extraordinary than we have been led to believe? Do our thoughts, intentions, and emotions have a greater impact on our lives than we realize? How might these changes in understanding who we are shift the way we live our lives?”