‘Something Is Very Wrong With The Global Economy’: Richest 1% Made 82% Of Global Wealth In 2017

In the beginning of 2018, as the world’s richest and most popular and influential celebrities, thought leaders, economists, pundits and politicians discussed topics as wealth inequality and populism in Davos, the global charity Oxfam released its annual study which found that global inequality is not only worsening, but 2017 may have been the worst year ever for the split between rich and poor.

At the time this analysis was launched, there were 2,043 billionaires worldwide, according to the report titled Reward Work, Not Wealth.
“The billionaire boom is not a sign of a thriving economy but a symptom of a failing economic system”, Oxfam executive director Winnie Byanyima said in a statement.

In addition to finding that the world’s richest 42 people own the same amount of wealth as the poorest 50% of people worldwide, a number that is fast approaching 4 billion, the report also showed that 2017 saw the biggest increase in the number of billionaires in history, with new ones created at a rate of one every two days. Their wealth has increased by 13% a year on average in the decade from 2006 to 2015.
In other words, in 2017 the world’s richest 1 % raked in 82% of the wealth, while the poorest half of the population received none, Oxfam said just hours before the world’s elite prepared to mingle at the World Economic Forum in Davos and pretend to care about the plight of the world’s poor.

Just as concerning – if only in theory – to the fake warriors for wealth and income equality in Davos, is that the three richest Americans have the same amount of wealth as the poorest half of the U.S. population. Bill Gates, Jeff Bezos and Warren Buffett are the three Americans whose combined wealth matches that of the poorest 160 million Americans – about $250 billion.

Among the other findings: the wealth of the super-rich increased by $762 billion in just 12 months from March 2016 to March 2017, which is enough to end extreme poverty seven times over. Nine out of 10 of the world’s 2,043 billionaires were men.

Separately, chief executives of the top five global fashion brands made in just four days what garment workers in Bangladesh earn over a lifetime.
“The people who make our clothes, assemble our phones and grow our food are being exploited to ensure a steady supply of cheap goods, and swell the profits of corporations and billionaire investors”, said Byanyima.

According to Mark Goldring, chief executive of Oxfam, the statistics signal that “something is very wrong with the global economy”.
“The concentration of extreme wealth at the top is not a sign of a thriving economy but a symptom of a system that is failing the millions of hard-working people on poverty wages who make our clothes and grow our food”, he said, and while he is right, the rich have little incentive to actually do anything about this record wealth divergence – besides pretending they are horrified by it, of course – at least until more Brexits, and more Trumps emerge, and eventually, a global uprising against the super wealthy.

“Inequality is reaching such extreme levels that it might actually be bad for really wealthy people because it’s slowing down economic growth and leading to political disruption”, said David Hulme, an expert global development at the University of Manchester.
Hulme added that “globally, across the world’s 7.6 billion people, extreme poverty is actually reducing. It’s only when you look at the top group, the richest people, that wealth is concentrating amazingly. Both of those things can happen at the same time”.

Over the next 20 years, the report claims that 500 of the world’s richest people will give $2.4 trillion to their heirs – a sum larger than the GDP of India, which has 1.3 billion people. 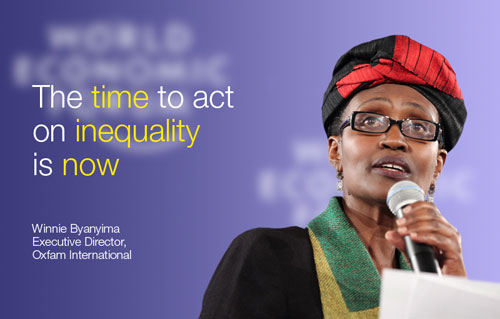 The World Inequality Report2018, a separate report, noted that income inequality varies greatly across the world. When defined as the share of total national income accounted for by a nation’s top 10% earners, it is lowest in Europe (37%) and highest in the Middle East (61%). The United States (47%) lags China (41%) and Russia (46%).

Oxfam said the massive inequality is being driven by factors that include excessive financial returns to company owners and shareholders at the expense of ordinary workers and the rest of the economy; the ability of rich individuals and corporations to use tax havens that allow them to evade or shield trillions of dollars from tax authorities; public policy that permits market conditions that push down wages and infringe on labor rights; and extreme wealth that is inherited, not earned.

Byanyima blamed “tax dodging” as one of the major causes of global inequality and urged leaders to crack down on tax havens and inject money into education, healthcare and jobs for young people.
“It reveals how our economies are rewarding wealth rather than the hard work of millions of people” Byanyima told Reuters, adding “The few at the top get richer and richer and the millions at the bottom are trapped in poverty wages”.

As noted above, the study was released on the eve of top political and business figures meeting at a luxury Swiss ski resort and private jet parking lot for the 2018 annual World Economic Forum, which focused on how to create “a shared future in a fractured world”.

“It’s hard to find a political or business leader who doesn’t say they are worried about inequality”, said Byanyima. “It’s even harder to find one who is doing something about it. Many are actively making things worse by slashing taxes and scrapping labor rights.”

Saudi Arabia may accept yuan instead of dollars for Chinese oil sales: report

Watch: world’s elite discuss the Davos plan to capitalize on coronavirus and roll out…