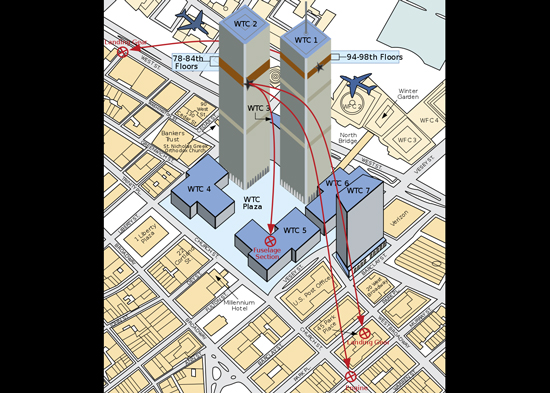 “All three buildings were destroyed by carefully planned, orchestrated and executed controlled demolition.” – Professor Lynn Margulis, Department of Geosciences, University of Massachusetts at Amherst, and National Academy of Science member, one of many academics who has been very outspoken regarding 9/11.

Are the government, its allies, and the ones who sit above governments and dictate most decisions and government policy (corporations and financial institutions, comprising the Deep State), lying to us? It’s far from a conspiracy to think so. If we look at 9/11 (one of many examples), approximately 50% of Americans don’t believe the official explanation of their government, and why should they? Since 9/11, several pieces of evidence have emerged suggesting that something fishy happened here, and the powers that be may have been responsible. In fact, if we look at just how much information and evidence has emerged, it’s almost impossible to say there was not any foul play. Perhaps this is why the U.S. government continually refused to re-open the investigation. The type of information and evidence mentioned, by the way, receives very little if not zero attention from mainstream media.

What really happened that day? Who really knows for sure, but imagine your own government creating an event in order to justify the invasion of multiple countries in the Middle East. This is what seems to have happened, and it’s called false flag terrorism, something more and more people are becoming aware of.
What also lends more credence to the theory of false flag terrorism is the fact that terrorism organizations like Al-Qaeda and ISIS have had a long history of relationships with Western intelligence agencies. These groups are commonly funded and armed by Western intelligence agencies. This was one of the topics of discussion a few years ago at the International Conference on the New World Order, which was organized and sponsored by the Perdana Global Peace Foundation, where academics and politicians discussed these ties.

A couple of years ago, at the G20 summit, Russian President Vladimir Putin revealed 40 different countries that have ties to, or are directly funding the terrorist organization known as ISIS, and multiple high ranking United States Defense personnel have come out and said they have absolutely no reason to invade Iraq. General Wesley Clark stated that it’s the perception of the United States that they have a powerful military and can “take down governments”.

The global elite tend to call this globalization, but it’s really infiltration and invasion. American intelligence agencies have infiltrated multiple elections and governments, installing a presence that best fits their own needs back home. The Middle East is littered with U.S. military bases.

“The statesmen will invent cheap lies, putting the blame upon the nation that is attacked, and every man will be glad of those conscience-soothing falsities, and will diligently study them, and refuse to examine any refutations of them; and thus he will by and by convince himself the war is just, and will thank God for the better sleep he enjoys after this process of grotesque self-deception.” – Mark Twain.

But the citizenry are not stupid. There are reasons why so few Americans believe what their government says on several different matters, and that’s evidence.
“The easiest way to carry out a false flag attack is by setting up a military exercise that simulates the very attack you want to carry out. This is exactly how government perpetrators in the US and UK handled the 9/11 and 7/7 ‘terror’ attacks, which were in reality government attacks blamed on ‘terrorists’.” – Eric H. May, a former U.S. Army intelligence and public affairs officer.

The latest piece of evidence comes from the University of Alaska Fairbanks, by Dr. J Leory Husley and his team of researchers, who have confirmed that the official explanation surrounding World Trade Centre Building 7 and why it fell is completely false. He is the Civil and Environmental Engineering Department Chair at the University, and he made a presentation of the findings of the study live on September 6, 2017, at the University of Alaska Fairbanks. It included the detailed findings and conclusions he and his team found as well as the next steps for the study, which included peer review as well as an open period for feedback and criticism.

It was claimed in the official explanation that the building fell due to fire, and this new study remodeled and recreated the entire day’s events around Building 7 and proved very eloquently that the explanation is impossible and that the only logical and physical explanation is controlled demolition.
This was the expected outcome, given the fact that the building was only experiencing fires on a couple of floors – it was not hit by a plane. It’s the same building that multiple mainstream media outlets reported as having collapsed before it actually did. See one example from the BBC here.
You can access the full study here.

Below is an interview with Richard Gage about these findings and more. Richard has had great success in presenting a scientific and logical case to support the fact that the official story around 9/11 is false and has attracted more than 2,900 architects and engineers with verified academic degrees, and in most cases professional licenses, to sign the petition calling for a new investigation into the destruction of World Trade Center Towers 1, 2, and 7.

Steven Jones is a former Professor of Physics at Brigham Young University. His major research interests have been in the areas of fusion, solar energy, and archaeometry. He has authored or co-authored a number of papers documenting evidence of extremely high temperatures during the WTC destruction and evidence of unreacted nano-thermitic material in the WTC dust.

Robert Korol is a Professor Emeritus of Civil Engineering at McMaster University in Ontario, Canada, as well as a fellow of the Canadian Society for Civil Engineering and the Engineering Institute of Canada. His major research interests have been in the areas of structural mechanics and steel structures. More recently, he has undertaken experimental research into the post-buckling resistance of H-shaped steel columns and into the energy absorption associated with pulverization of concrete floors.

Anthony Szamboti is a mechanical design engineer with over 25 years of structural design experience in the aerospace and communications industries. Since 2006, he has authored or co-authored a number of technical papers on the WTC high-rise failures that are published in the Journal of 9/11 Studies and in the International Journal of Protective Structures.

Ted Walter is the Director of Strategy and Development for Architects and Engineers for 9/11 Truth (AE911Truth), a nonprofit organization that today represents more than 2,500 architects and engineers. In 2015, he authored AE- 911Truth’s Beyond Misinformation: What Science Says About the Destruction of World Trade Center Buildings 1, 2, and 7. He holds a Master of Public Policy degree from the University of California, Berkeley.

Together, they published a paper titled 15 Years Later: on the physics of high-rise building collapses in the European Scientific Journal.

We know this for a fact now, yet there’s been no retractions in the media. There not even willing to re-open the investigation. Why isn’t someone Richard Gage brought on mainstream media to talk about what happened?
So many things were build off of 9/11, basically the entire war that followed and what we see of it today.

Financial Collapse Is a Mathematical Certainty: The Perfect Storm Threatening the…

Financial Collapse Is a Mathematical Certainty: The Perfect Storm Threatening the…

The FBI’s Gestapo Tactics: Hallmarks of an Authoritarian Regime