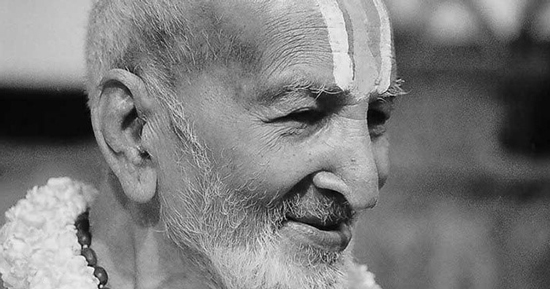 Nearly 40 million people practice yoga in the United States alone. It’s fair to say that yoga has become a way of life for many, many people in the West. But how many know that the yoga form they practice has been influenced and even, some may say, invented, by just one man?

Tirumalai Krishnamacharya, born a hundred and thirty years ago in a tiny South Indian village, was the major teacher behind today’s most popular yoga styles, including the refined form of yoga that became Iyengar, along with the Vinyasa form of Viniyoga, the dynamic series of Ashtanga, Indra Devi’s yoga, and many other methods.

This sage is often referred to as the father of modern yoga due to his expertise, unique approach to yoga and widespread influence on so many yoga masters. His four most famous disciples – Pattabhi Jois, B.K.S Iyengar, Indra Devi, and Krishnamacharya’s son, T.K.V. Desikachar – played a huge role in popularising yoga in the West.

Krishnamacharya received his Hatha Yoga training during seven years spent with his guru, Ramamohana Brahmacharya, who lived in a remote cave in the Himalayas. Krishnamacharya also spent many years as a scholar, immersed in studying, and then teaching Sanskrit, Vedic rituals, and philosophy.

Author, yoga teacher and long-time student of Krishnamacharya, Mark Whitwell, describes Krishnamacharya’s teachings as being brought forth from the great tradition of authentic yoga.

“The hallmark of Krishnamacharya’s work is that there’s a right yoga for every person no matter who the person is. Anyone who wants to do yoga can do it. He used to say if you can breathe you can do yoga. So in his teaching, we adapt yoga to the individual. We don’t adapt the individual to yoga. We don’t create standardised, stylised systems and then push the person to try to attain that standard in a linear effort, that can sometimes be a struggle, trying to get to this presumed superior place as if they’re not here already in this moment as life itself.” 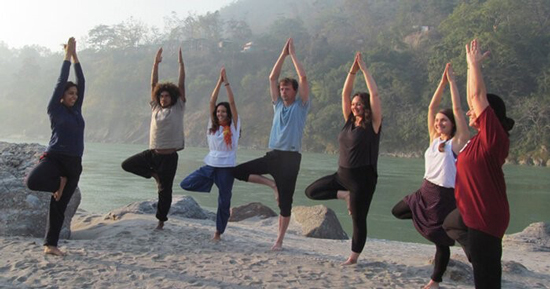 Krishnamacharya believed yoga was for anyone, no matter who they are.

Mark Whitwell studied for many years with both Krishnamacharya and his son Desikachar. “I went to India because the Beatles had gone to India, and wandered around India for a year and a half meeting gurus, teachers, and yogis. Then I went to Ramana’s ashram and met a young man who took me to meet Krishnamacharya and Desikachar. When I met them, I knew that they were intelligent people and they weren’t doing the yoga business. They weren’t yoga entrepreneurs or spiritual entrepreneurs or gurus in that power structure or model. And it was very refreshing.”

Interestingly, Krishnamacharya not only brought yoga to Western people, but revived this ancient practice in its own home. The resurgence of yoga in India, after it had died down under the colonial imposition of the British, owes a great deal to Krishnamacharya’s lecture tours and yoga demonstrations conducted all over India in the 1930s.

Biographical notes made by Krishnamacharya give us an insight into his personal life and journey into yoga. According to these notes, which he made in the final decade of his life, he was initiated into yoga by his father at the age of five, learning Patanjali’s sutras. His father told him that their family was descended from a ninth-century yogi by the name of Nathamuni. Krishnamacharya wrote that he learned 24 ASANA-s from a swami from the temple of Sringeri Math, which birthed the Sivananda Yoga lineage, “while still an urchin”. His father died when he was in his early teens and at age 16 Krishnamacharya embarked on a pilgrimage to his ancestor’s shrine where he encountered him in an amazing vision.

During his seven years with his guru, Krishnamacharya memorised the Yoga Sutras of Patanjali, studied ASANA-s and PRANAYAMA, as well as the therapeutic aspects of yoga, and claims he mastered an incredible number of 3,000 ASANA-s. His guru asked him to return home, start teaching yoga and become a householder. His teacher wanted him to teach yoga that was not for renunciates, but was for everyone. Krishnamacharya returned home and started teaching yoga in his spare time on his days off from his job as a coffee plantation manager. 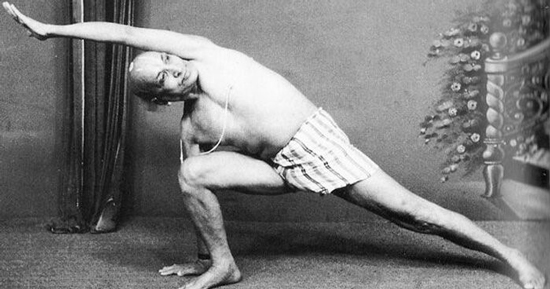 Krishnamacharya’s initial teaching style was a strict version of Hatha Yoga, but before long he became one of yoga’s famous reformers. In 1931, he received an invitation to teach at the Sanskrit College in Mysore. The Maharaja of Mysore, a long time champion of Indian ancient arts, supported Krishnamacharya for the next 20 years to promote yoga throughout India, financing demonstrations and publications.

He gave lectures and yoga demonstrations along with showing the SIDDHIS, or exceptional supranormal abilities which can be attained through the practice of yoga, in a bid to grab people’s interest in a dying tradition. Some of the SIDDHIS he demonstrated were the suspension of his pulse, performing complicated ASANA-s and using his teeth to lift heavy objects.

Unlike many modern-day yogis, Krishnamacharya believed yoga belonged to God and never took ownership of yoga. Mark Whitwell believes that his wisdom and what he brought forth from the great tradition has been bypassed in modern yoga. Mark is passionate about bringing these back and developing an authentic yoga practice for the individual, as based on the teachings of Krishnamacharya and his son Desikachar, with whom he enjoyed a relationship for more than twenty years.

“I went to America for the first time to look at yoga and I was shocked at what I saw. Because it was not at all what Desikachar and Krishnamacharya had been teaching me… It looked and felt entirely different.
When you put the principles of Krishnamacharya into these forms of yoga that have been popularised it turns it into actual yoga. It makes it very powerful… It makes it safe.”

Mark Whitwell is the author of Yoga of Heart and The Promise of Love, Sex and Intimacy, and is the editor of TKV Desikachar’s book The Heart of Yoga – written to help bring Krishnamacharya’s principles and the purity of his yogic wisdom back into the world of yoga today. 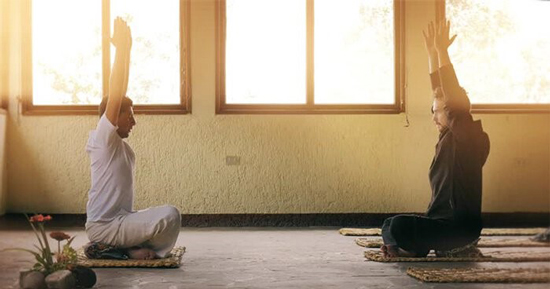 “The heart of yoga is the relationship between the teacher and student.”

“Krishnamacharya described all the different yoga categories as belonging together as an integrated holistic approach to be adapted to the needs of each individual. He insisted that it was a wrong approach of Western thinking to split them apart as if they could be isolated from each other.”

Mark describes Desikachar’s profound teaching on his father’s lineage as “the heart of yoga is the relationship between the teacher and student” and is interested in aligning Western yoga with its ancient roots.

“Indians in India are now susceptible to Western teachings on yoga, and although it reflects a fusion that began in the 19th century, it’s kind of a ‘re-colonization’ of India that these commoditised ideas are being popularised there. So we do have to put in the principles of Krishnamacharya. What needs to happen is that the full spectrum of yoga be practiced and understanding be provided and put into these popularised systems that have been going on for the last thirty or so years. Then, people will be playing with a full deck of cards and have yoga in all its aspects.”

Krishnamacharya’s potent legacy lives on in some way all around the globe, through yoga’s influence in people’s daily lives. Yet, it’s time to fully embrace the true power of yoga through his ancient wisdom and integrate that into the yoga we all love.

“The problem is with the way the west has popularised ASANA-s as just muscular effort, that’s just male, male, male – without the female aspect. Of course, life is both equally feminine and masculine and in perfect union. That is why the breath is such a central teacher. This is one of the purposes for doing ASANA-s. This knowledge has been left out. It’s kind of curious that we’ve ignored Krishnamacharya, even though he is publicly acknowledged as an authentic guru.
In the West, we honour our lineages, we want to know what the teachers taught. But in this instance, for some reason, we’ve popularised yoga and ignored these basic matters, especially when there’s such extraordinary transforming power in yoga for each individual who practices it.” – Mark Whitwell.