The Phantom Killer Destroying Your Body 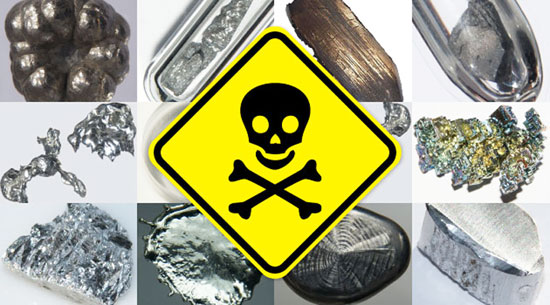 Ongoing research has revealed that an average person is exposed to over 80,000 known toxins and heavy metals every day. They are commonly found in drinking water, chemtrails, furniture, pharmaceutical drugs, and even the air we breathe.
With constant exposure, heavy metals can quickly build up in the body’s tissues without our knowledge and become phantom killers.

Even at lower levels, heavy metal exposure can create serious health issues that can impact the body’s ability to function properly.
Many of the symptoms from low-grade heavy metal toxicity are often confused with common health issues, including:
• Chronic fatigue and brain fog;
• Headaches and migraines;
• Autoimmune diseases;
• Skin rashes and eczema;
• Anxiety, depression, and other mood disorders.

The vague nature of these symptoms is one reason why heavy metals have become such a significant problem.

When visiting a doctor to diagnose these symptoms, it is highly unlikely they will consider heavy metal toxicity.
Doctors aren’t trained to look for buildup of heavy metals in the body. Not to mention that acute heavy metal accumulation is exceptionally difficult to test and detect.

As a result, many people suffer from the negative effects of heavy metal toxicity without even knowing it. This is why some people put effort into improving their diet and get absolutely nowhere in improving their overall health.
Trying to improve your health without addressing heavy metals is like building a bridge without a support system. It may seem like you are making progress at first, but you will ultimately fail.

Chelators are compounds that have the unique ability to bind to heavy metals and extract them from the body’s tissue. They act like magnets. Once extracted, the body can simply excrete the heavy metals from the system.
While there are several of different types of chelators, clinoptilolite zeolite is considered the most effective natural chelator. Clinoptilolite zeolite is a natural mineral with a unique ability to trap toxins within its crystal structure as it passes through the body.

When ingested, clinoptilolite zeolite works fast to quickly and easily reduce toxic heavy metals like:
• Arsenic in water, juice, or rice;
• Mercury from dental fillings;
• Lead exposure from food and water pipes;
• And many other positively charged heavy metals.

There are hundreds of articles and case studies on the National Institutes of Health website proving zeolite’s ability to remove toxins from a variety sources.
For example, the Institute of Biodiversity and Ecosystem Research, Bulgarian Academy of Sciences found that clinoptilolite effectively detoxifies small mammals that were full of lead.

Additionally, the Geosciences Department at the University of Wisconsin discovered that clinoptilolite zeolite is effective in removing arsenic from water.
A 2004 study published in the Journal of Colloid and Interface Science also proved the ability of natural zeolites to effectively remove heavy metals from wastewater.
Best of all, clinoptilolite zeolite has been granted GRAS (Generally Recognized As Safe) status by the Food and Drug Administration.

Not All Zeolites Are Created Equally

Clinoptilolite zeolite’s ability to flush toxic heavy metals and pollutants out of your system is truly amazing; however not all zeolite products are created equally.
When mined, zeolite has already been in the ground awhile, soaking up lead, arsenic, and other environmental toxins and heavy metals like a sponge. If ingested in its raw form, freshly mined zeolite would be too big and too dirty to work properly.
Unfortunately, most zeolite supplements fall into this category. Essentially they are raw zeolite particles that haven’t been properly cleaned and then ground up into pieces that are still too large for the body to absorb.

On the other hand, clinoptilolite zeolite which has been properly cleaned and sized has been proven by extensive research to selectively trap and eliminate only toxins from the body.

Many experts recommend the liquid clinoptilolite zeolite supplements that undergo proprietary cleansing and sizing processes, removing pre-existing pollutants from the zeolite and micronizing and nano-sizing the zeolite particles, so they can effectively detox. It is best of they are third-party tested in an independent lab to verify its purity and size.

Heavy metals are a considerable threat to your wellbeing. Don’t let anyone tell you otherwise.
While you may not be subjected to severe life-threatening heavy metal poisoning, you can experience the acute effects of heavy metal accumulation. Such side effects include things like brain fog, mood disorders, autoimmune disease, headaches, fatigue, and skin rashes.

If heavy metals are causing any of these issues, then no amount of healthy behaviors will produce results unless you take steps to remove these heavy metals from your body.

Nevada Man Blinded, Paralyzed, and Nearly Died After Getting the Flu Shot