This article was published back in 2015, and it brings much needed context to the current situation in Ukraine.

A group of large international investors buy out Ukrainian government’s securities. Franklin Templton is one of them. The investment group snapped up Ukrainian international debt with a face value of almost $5 billion at the end of August, nearly a fifth of the country’s outstanding international government bonds.

Franklin Templton has all the makings of a ‘financial vulture’. Until now the sum paid by it for 20% of Ukraine’s national debt remains to be a commercial secret. The vultures purchase the securities with low, almost junk, ratings at low prices to demand full payment from issuer afterwards.

Argentina is a good example of vultures’ destructive activities.

The country made a deal on restructuring with 95-97% of debt holders but the rest happened to be in the hands of financial vultures that spoiled it all by demanding full payment. The vultures (two US investment funds) started court proceedings to make Argentina default. The country may be mercilessly pillaged in case it complies with the ultimatums of vultures and the ruling of US court.

The story is a warning to Ukraine which has sold its securities to Franklin Templton. According to a recent Bloomberg report, the investment fund acts under US jurisdiction and is controlled by Rothschilds, the family known for its death grip. Last year I wrote in my article The Financial Situation of Kiev Regime and Prospects for Ukraine’s Default that Ukraine may face the very same default that “will never come” according the assurances provided by Ukraine’s Prime Minister Arseniy Yatsenyuk. Some may lose billions, some may acquire unprecedented wealth. As the global experience shows, defaults are seldom impromptu. Normally they are planned. Sometimes the preparations may last for a few years. Ukraine is not an exclusion. It will default on its debts.

The time will be defined by sponsors and modest beneficiaries of such organizations as Franklin Thompson. At the moment of writing the article I did not know their names. Now they have come into the open. It’s a sign that the drama is nearing its denouement.

The Rothschilds family [which is the head of the New World Order beast] has come up with an initiative to create a group of Ukrainian bonds holders to shape a common policy on debt settlement. Rothschild & Cie Banque, a French bank belonging to Rothschild Group, offered its service in the capacity of “go-between” in the talks of Ukraine’s Ministry of Finances and creditors on restructuring the debt. Now creditors are waiting for Kiev to put forward the proposals in mid-March, according to Giovanni Salvetti, Co-head of Russia and CIS at Rothschild Inc., who handles central and Eastern Europe and the Commonwealth of Independent States. Salvetti said there were two opinions among creditors about setting up the committee: those who want to wait and see what the government will say and those who want to set “some hard lines for the potential restructuring, like saying we’re looking for a proposal but be aware that we are not ready to accept X, Y, Z.” 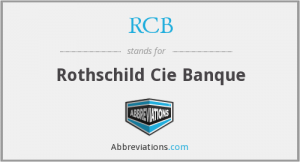 The Bloomberg’s information is not detailed but it allows to make the following conclusions: first, the default of Ukraine is inevitable and the credit holders are aware of this fact, second, the default will be accompanied by restructuring on tough terms unfavorable for Ukraine. One detail strikes an eye – the leak on the coming default and debt restructuring coincided with the announcement made by the International Monetary Fund that on March 11 it signed off on an USD17.5 billion loan for cash-strapped Ukraine to keep its economy afloat. The IMF loan is spread over four years within the framework of stabilization program. Watch below the Confessions of an Economic Hitman:

The Coincidence May Be Interpreted In Different Ways:

Version one. There is no coordination between the International Monetary Fund and the Rothschild group; they vie for the control over the Ukraine’s economy.

Version two. It’s not a «genuine» decision» of the International Monetary Fund but rather a PR-action taken to prevent the further falling of Ukraine’s investment and credit rating.

Version three. The decision is ‘genuine’. Ukraine will get the money but not for some ephemeral ‘program of economic stabilization’. The purpose is to guarantee that Franklin Templeton and other financial marauders acting under the disguise of respectable ‘investment funds’ get full payment on Ukraine’s securities. If so, the Rothschilds and the International Monetary Fund do effectively coordinate their activities.

The security holders are confident in inevitability of Ukraine’s default. In this case the country will be ruled by duumvirate of US government and world financial oligarchy on the basis of the agreement on debt restructuring to be signed in Kiev with the Rothschilds.

It can be presumed, that the agreement will confirm the consent of Ukraine’s government on complete privatization of the country, including the rest of state industrial property, land and natural resources. Franklin Templton and other structures belonging to the Rothschilds will gain.

Andrey Fursov, a Russian sociologist, historian and writer and publicist (author of several books on modern history), believes that the Rothschilds are invisibly present in all Ukraine’s regions, including the eastern part of the country, and sectors of economy. The prime mission is to establish its control over the Dnipropetrovsk Oblast (province) of central Ukraine where Rothschilds Europe Bank and Rothschilds-controlled Royal Dutch Shell already operate. It can be called a Rothschilds legal intelligence gathering station.

Experts believe that that the illegal representation is much more effective to include many Rothschilds-controlled individuals and companies. Actually the implementation of the program of Ukraine’s sovereign debt restructuring will be based on the data received from Rothschilds’ legal and illegal spy stations in Ukraine.

It’s all not that easy. The Rockefellers have a foothold in the west of Ukraine, the country where they pursue their own goals too. The both groups try to divide the spheres of interests but they cannot do it without bickering.

For instance, many experts believe that tycoon Dmitry Firtash is the chief representative of the Rothschilds in Ukraine. His removal from the scene is attributed to the Rockefellers who effectively use the administrative potential of Washington in Kiev. The emerging duumvirate in Ukraine and the coming default make the situation in Ukraine less predictable.

Protect your vision with goji berries