Will 5G’s Dramatic, Problematic Health Issues Be Worth Humans Suffering?

… Since No Health Nor Environmental Safety Assessments ever Have Been Undertaken To Prove Non- thermal Radiofrequencies Cause No Harms To Any Living Organisms? 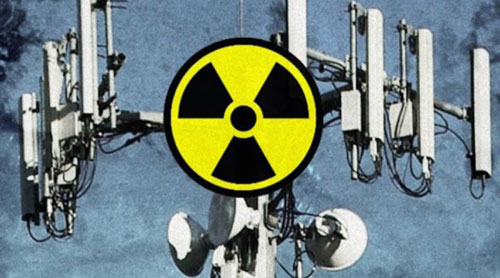 According to Ronald M. Powell, PhD, who is [a retired U.S. Government career scientist (Ph.D. in Applied Physics from Harvard University). During my Government career, I worked for the Executive Office of the President, the National Science Foundation, and the National Institute of Standards and Technology. I currently interact with other scientists, with doctors, and with aware individuals worldwide about the impact of radiofrequency radiation on human health]:

“In the simplest terms, human beings are bioelectrical in nature. That is why electrocardiograms work when they monitor a beating heart. And that is why electroencephalograms work when they monitor the activities in the brain. Humans evolved in levels of radiofrequency radiation far below those produced by human technology today. We humans are simply not designed to tolerate today’s high levels of radiofrequency radiation.

When the radiofrequency radiation from cell towers, including 5G’s small cell towers, and other wireless sources hits the body, that radiation disrupts the bioelectrical workings of the body. This disruption occurs at levels of radiation far below those set as the FCC’s Maximum Permitted Exposure limits.

In response, the body must fight back constantly to regain control. This battle can lead to a wide range of symptoms.

What is the evidence of the harm caused by radiofrequency radiation?

There are thousands of archival biomedical research papers, published in peer-reviewed journals, that have shown that radiofrequency radiation is harmful to the body in one way or another.

These have been collected and reviewed in a number of summary documents. Here are just two examples:
1.BioInitiative 2012, draws on about 1800 publications;
2. EUROPAEM EMF Guideline 2016 for the Prevention, Diagnosis and Treatment of EMF-Related Health Problems and Illnesses, draws on 308 references. (“EMF” stands for electromagnetic fields, a term inclusive of radiofrequency radiation.)

However, a massive push-back by health-conscious consumers is mounting state-by-state due to all the unknowns and unproven ‘science’ which accompanies what 5G is reported to be – “weaponized warfare microwave technology for crowd control.”

Here’s some 5G information readers may not know, but may find disturbing.

The need for speed has the consequence of going from moderate to severe health effects in record time. Note that 4G operates at 2.5 GHz or oscillates about 2.5 billion times per second.

This frequency mimics water molecules in your body, and was chosen specifically for broadcasting services and equipment under government license.

This means that all company products must meet this frequency or be deemed illegal.
For what purpose is matching the human body’s frequency, you may ask, other than for weaponization? Good question.

These frequencies can cause burning sensations on your skin, impact fertility, as well as alter the electrochemical waves of your brain to affect consciousness.

Secret testing of 5G emissions made its debut during the 2018 Olympics, and then again at the 2018 Super Bowl where over 67,000 people were part of a stress-test without their consent.

Could these unusual fires from California, presented in the video below be the result of lasers from Directed Energy Weapons?

Whole forests have been devastated down straight lines, obeying fence lines. Add to that, the sanctioned poisoning of hardwood trees by timber companies that has led to over one million dead trees to create a fire hazard.

Are the trees being destroyed merely to unblock hazardous signals? Is this treason/tree-son on multiple levels? These same millimeter waves have been used by the U.S. Army as a crowd control dispersal weapon called Active Denial Systems.

Below is a chart published by Stetzer Electric.com, one of the premiere researchers, plus RF-protection-device companies, which graphically indicates the probable and possible symptoms of radio-wave sickness, known as electromagnetic hypersensitivity (EHS) per the World Health Organization designation, and medically classified as IEI (idiopathic environmental intolerance). 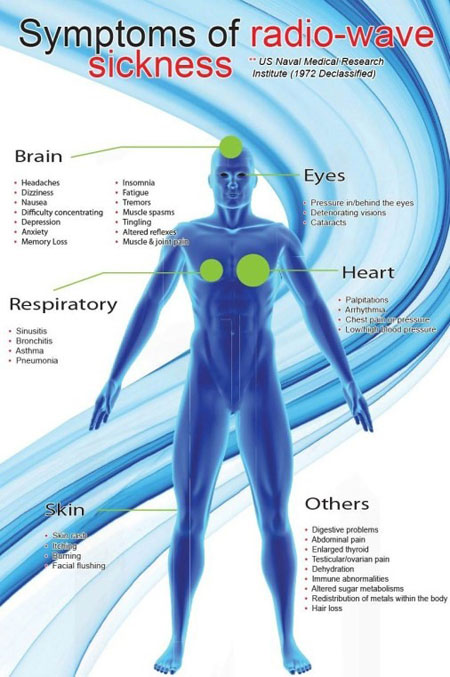 With all the above ‘parameters’ pointing toward 5G’s capability for producing short- and long-term symptoms, chronic illness and diseases, one has to wonder where are U.S. federal and individual states health agencies, including the FCC, in their thinking and regulation-making about implementing 5G, or are they too deeply influenced by the U.S. military and/or the Deep State?