A teacher at one of the 1,000 Australian schools feeding kids chips made out of powdered crickets asks, ‘Do crickets taste good?’ The student nods and the teacher adds, ‘Yeah. Let’s eat some more crickets!’ 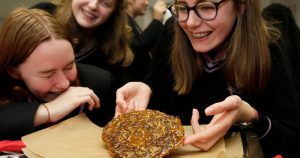 Bugs are on the menu again. Why does the World Economic Forum have such a weird obsession with making our kids eat them?

First, let me make something very clear: Bugs are not food. You should not eat bugs. They belong on the ground, or in the air, or wherever they live. They do not belong on your dinner plate.

With that out of the way, we can move on with the insanity being encouraged by unhinged scientists and allies of the World Economic Forum.

There is no doubt that the World Economic Forum likes bugs, but only if other people are eating them. Their reasoning for this hypocrisy is what you’d expect from people who always seem to be plotting to take over the planet and shape it into a full-blown socialist ‘Utopia’ (which is one of the greatest oxymorons ever heard).

You will eat bugs to stop Climate Change.

Climate Change is nothing more than an exaggeration of the weather. The weather is not going to kill you unless you have the misfortune to get struck by lightning, hit on the head by a hailstone, or caught in a flood. Chances are, a warm summer’s night is not going to act like the local axe murderer. Bad energy policy is a different matter. You might freeze to death if you have no heating in your home, which, ironically, the same bug-pushers now want to take away. Switzerland has threatened to throw people in prison for three years if they turn up their heating to 19 degrees C (around 66 F).

But back to the bugs.

You might be wondering – how will eating bugs change the weather?

The official World Economic Forum line is that eating meat is accelerating the effects of Climate Change. Therefore, to fix ‘the climate’ humans need to reduce their consumption of meat and replace it with a climate-friendly substitute. There are a few on offer, but the favourite is insect protein.

These agenda-driven bureaucrats are doing their best to promote insect-gorging as being good for you. If you believe the hype, they’re nutritious, full of protein, and still very tasty. And there is a great range of bugs out there for you to try. You could eat crickets, or grind them into a powder to replace plain white flour or self-raising flour (but what’s wrong with normal flour? It’s made from cereals after all). You could attempt some highly nutritious cockroach milk on your cereal. Maybe you enjoy a bit of seasoning on your meals? Well, instead of getting out the salt and pepper, grab some lightly-acidic ants instead. You could even top those meals off with some protein-packed mealworms.

No, I’m not kidding. This is seriously what they want you to be eating.

In recent weeks, it was revealed that canteens in 1,000 Australian schools have started selling cricket chips produced by the company Circle Harvest. Students are being encouraged to eat these chips, which are laced with cricket protein, and are told by teachers that they are healthy.

In a video from one school of three young students eating these chips, a teacher can be heard off camera saying: ‘Chips are great, aren’t they? And these chips are even better because they think they’re better for you!’

Another teacher is then heard saying: ‘Did you know they’re made from little insects?’ When one of the students replies ‘no’, the teacher goes on to say ‘Can you taste it? No, you can’t. It tastes like normal CCs doesn’t it?’

It is clear that these people are doing everything they can to normalise eating bugs from a young age. As we all know by now, indoctrination starts early.

If you have children in an Australian school, please tell them that eating bugs is not normal and that they should steer clear of these products. 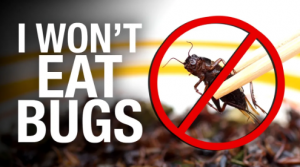 Meanwhile, a couple of South Korean scientists, In Hee Cho and Hyeyoung Park, experimented with different ways of cooking mealworms, seasoning them with amino acids, onion powder, garlic powder and mushroom powder to create a ‘meaty’ flavour so that they would be more appetising to the general public. Bugs should never be appetising. They should always be disgusting and never consumed.

These researchers found that heating mealworms with sugar produced a popular meaty flavour after each of the methods of cooking was taste-tested by volunteers.

The two scientists stated: ‘Insect farming requires just a fraction of the land, water, and feed in comparison to traditional livestock farming,’ even going so far as to label insects as ‘superfoods’.

Cockroach milk, produced by one particular species to feed its young, is another so-called superfood with claims that it is three times as nutritious as cow’s milk, buffalo milk, and even human breast milk. It is apparently a complete source of protein, containing all nine amino acids, and is being touted as key to feeding our growing population into the future despite scientists saying it is likely to be unfeasible. For those of us who are not insane, this probably isn’t the answer to a growing population.

Western civilisation needs to stop for a moment. Scientists are feeding insects to our children while celebrities produce propaganda videos to support the narrative. In one video from Vanity Fair, Nicole Kidman consumed insects, stating at the start of the video, ‘I’m here to reveal my hidden talent eating micro livestock.’ She went on to claim, ‘Two billion people in the world eat bugs, and I’m one of them.’

Note the term being used to describe insects – ‘micro livestock’. People pushing insects as food, particularly as an alternative to meat, are using this term to make it sound as if eating insects is not out of the ordinary, essentially equating it to consuming livestock.

But it isn’t the same as consuming products from livestock. Not only is the consumption of bugs not normal and completely unappetising, it could easily lead to the spread of parasites. Insects are not meant to be consumed by human beings because they are a great vector for parasites.

For example, crickets and cockroaches can often carry horsehair worms, which, if ingested by humans, can cause quite a bit of stomach discomfort and illness. Crickets can also spread salmonella and E. coli, which often cause significant illness in humans and can be fatal for vulnerable individuals. Mealworms carry diseases as they feed on dying and dead birds. They are also home to Hymenolepis diminuta, otherwise known as rat tapeworm, which can infect humans via ingestion of a carrier.

To date there have been only rare instances of this parasite infecting humans, given that it occurs through accidental ingestion. But if mealworms are turned into a common delicacy, then you can expect more and more people to contract this tapeworm.

Of most concern, however, is that insects contain a polymer called chitin. When ingested, it can get into the lungs. A build-up of this polymer can cause significant health issues. A study on chitin and its effects on inflammatory and immune responses noted the following:

‘Mammalians are potential hosts for chitin-containing protozoa, fungi, arthropods, and nematodes; however, mammalians themselves do not synthesize chitin and thus it is considered as a potential target for recognition by mammalian immune system. Chitin is sensed primarily in the lungs or gut where it activates a variety of innate and adaptive immune cells. Chitin induces cytokine production, leukocyte recruitment, and alternative macrophage activation.’

In other words, the human body was not created to process chitin. There is a reason the human diet does not contain it. It can cause inflammation in the body, and can even lead to respiratory illnesses and cancer. And insects contain high amounts of it.

So, as much as the World Economic Forum and other members of the bureaucracy want you to consume bugs, don’t do it. They might claim it is for the benefit of the world, that it is to fix ‘Climate Change’, but do you really think they are going to sit there eating bugs like they want the rest of us to do? Absolutely not. They will still be feasting on succulent steaks, ribs, burgers and the like while the rest of us are made to crunch on crickets and sip on cockroach milk.

Remember, bugs are not food. So if you find yourself eyeing an insect and thinking ‘hey, that looks tasty’, don’t pick it up and eat it. Get some help.