An amazing photograph was published by NASA in October 2014: An Earth sized UFO was spotted on the surface of the Sun! 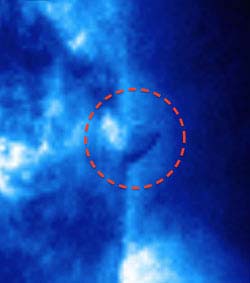 At the end of October 2014, the SOHO telescope (Solar & Heliospheric Observatory) whose mission is to investigate the central star of our solar system, surprised some astonishing images: there was a mysterious object that appeared at the surface of the Sun. The object was similar in size to Earth! Researchers gave no scientific explanation on what the strange visible phenomenon could be so that, no matter how amazing this might seem for us, earthlings, it is very possible that this is a gigantic extraterrestrial ship.

This hypothesis can not leave us indifferent, since it proves that the vain mankind is close to the bottom of the evolutionary ladder, at least this is how things are when it comes to technological advancements. Is it possible that there are beings out there in the cosmic space who can build ships the size of a planet, that can resist the extremely high temperatures at the face of the Sun?! The recent pictures taken by SOHO seem to prove so. And this amazing case is not the only one.

For 18 years, since NASA and ESA (the European Space Agency) have launched the SOHO project, there have been many proofs pointing the existence of advanced extraterrestrial civilizations, but they have not been presented to the public.

Such conclusive images, which should be studied closely, have been provided by different space telescopes as well. This kind of images are present in the NASA archives or in the archives of other space agencies. For example, some Russian researchers drew the attention over five years ago on the UFO’s that have been observed around the Sun, flying on unusual trajectories and suddenly taking L-turns or changing their speed. 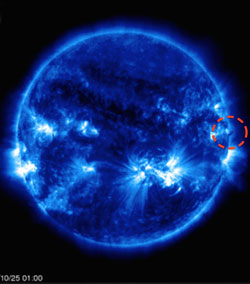 On the photographs taken by SOHO on the 25th of October 2015 at 01.13, on the right side of the Sun, there’s a clear image of a solid object whose visible part is shaped like a shark fin or like a classic flying saucer, half “sunken” into the solar crown.

The unidentified object photographed by NASA is clearly different from the natural phenomena that occur at the surface of the Sun: it has a solid structure, with it’s margins clearly outlined and it does not emit any flames or thermal radiations. A truly surprising aspect is the size of this UFO, estimated to be approximately equal to the size of our planet.

Considering the importance of this discovery, the public opinion’s reaction was prompt, many human beings wondered what was the nature of the gigantic ship photographed by SOHO. It is definitely the product of a highly advanced extraterrestrial civilization, considering the extraordinary technology of this UFO.

The picture of the mysterious UFO is published on the SOHO mission website and on the NASA website, so there are no suspicions regarding its authenticity. It can rightfully represent an authentic source of inspiration for future science fiction movies.

While the scientific community is inveterately refusing, due to political orders, to admit the existence of extraterrestrial civilizations, we can see that space telescopes are offering more and more proofs on the mysterious UFO phenomena. There are many photographs or video recordings taken by NASA which show frequent occurrences of some unidentified flying objects close to or even on the surface of the Sun, some of them being downright gigantic, just like the one in this recent photograph taken by SOHO.

The large number of similar occurrences is indicating the existence of a possible attraction exercised by the colossal energy of the Sun towards extraterrestrial space ships. 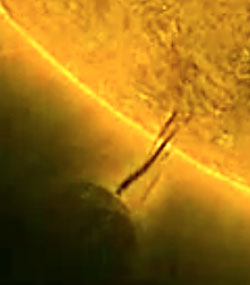 Another amazing sighting of a UFO at the surface of the sun took place in 2012. At that time, NASA published some expressive images which are also undeniable evidence.

In March 2012, a gigantic UFO which, according to the estimations, surpassed the Earth in size, was filmed by the SDO (Solar Dynamics Observatory). Starting with the 8th of March, for four consecutive days, the spherically shaped, dark colored UFO could be seen suspended somewhere close to the Sun.

In the beginning, the UFO came closer to the sun and started to draw some energy “threads” from the solar atmosphere. Gradually, these “threads” turned into sui generis “umbilical cords” which could be easily seen. They remained connected to the Sun until the UFO left.

The ship stayed there for over eighty hours and it was extremely close to the Sun. It seemed that it fueled up on energy. Its retreat caused some energetic turbulence in the place where it was stationed, which lasted for approximately six hours. Some researchers who watched the images with great interest have actually state that the turbulence were an undeniable proof that the mysterious sphere had truly existed in that part of the solar atmosphere.

The amazing filming done by the SDO in 2012, which looks like it was taken from a Star Trek episode, is stored in the original NASA archives, Helioviwer, where it can be accesses any time by those who are interested.

Looking at the respective images, we can easily say that this mysterious unique spatial phenomenon is undoubtedly of alien origin and it can not be considered a natural manifestation, considering its many obvious particularities.

Scientists, who were unable to give an explanation – and avoided to admit the idea of an extraterrestrial origin of such astonishing technology – could only give some confuse statements on this recording, saying that, in their opinion, this is a “whole in the solar atmosphere”. Subsequently, they stated that they want to study the phenomenon further before making any other statements.

Decision in the CLUJ trial: accusations rejected as insubstantial