„The woman lies on her back, bends her legs and brings her knees towards her breasts; the jade stem will enter at medium depth, at first, then deeper, when the woman will move voluptuously and the precious amorous elixir flows abundantly. The lovemaking stops when the woman reached orgasm several times. This posture allows the man to be keep in shape and regain his strength.”

Sou Nu Jing (The book of the girl with no complex)

For the western man, the name of this posture is exotic, to say the least, but for those endowed with spiritual intuition, it points out the truly special virtues of this posture.

In ancient China, the turtle used to be a symbol of stability. It was also said to bear the whole world on top of her shell. Thanks to her well known longevity, it was also associated with the concept of immortality.
Using this symbol, the Tao sages said that this posture can awaken the life-supporting strength. While practicing this posture, the practitioner will gain tremendous vitality, the regeneration of the entire being and his body will remain young, vigorous and supple until reaching old age.

Also, for the Chinese alchemists, the turtle represents the starting point of evolution, the beginning of the work of spiritualizing the matter. In sexual alchemy, this is correspondent to the triggering of the transmutation processes of the creative potential, which create an enormous amount of energy which will then ascend into the higher levels of the being and eventually be transformed in spiritual energy.

Concurrently, the turtle symbolizes both the feminine, and the masculine. This is a clear indication of the profound fusion that takes place between the two lovers when making love in this posture, which will eventually lead them to the awakening of the glorious androgynous state.

The description of the posture 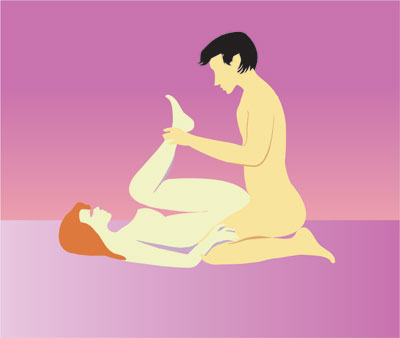 The woman lies on her back, then lifts her knees. With the help of her lover, she brings her knees close to her breasts. While gently caressing her thighs, her lover will enter her yoni which is drunken with pleasure, while alternating profound and superficial penetrations.

This posture encourages the sensual woman to move her body in harmony to her lover’s body. At times, her lover must penetrate her as deeply as possible. In this manner, the woman will feel great pleasure and her yoni will abundantly secrete the precious mysterious fluid which is endowed with many alchemical virtues. The man will try to absorb every drop of this elixir of rejuvenation, until the last one, both through his lingam, as well as frantically savouring it from his lover’s yoni.

After the woman has experienced a series of orgasms without discharge and the man has also experienced amorous ecstasy through transfiguration and empathy, the two will become aware, for 30 minutes, of the profound state of completion and happiness that has occurred.

An amazing photograph was published by NASA in October 2014: An Earth sized UFO was spotted on the surface of the Sun!

The posture of the apes in the third month of spring

The method of the Great Bee