ATTENTION!!! WE ADVISE YOU TO READ WITH GREAT ATTENTION AND THEN TO SHARE TO ALL THOSE WHO ARE INTERESTED IN THE FOLLOWING ARTICLE. 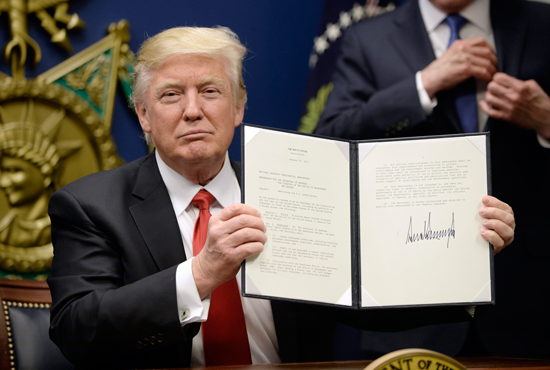 An important bomb report: a Trump Executive Order courageously targets the shadow Government and opens the door for the first time to full disclosure of the criminal actions of the so-called ILLUMINATI

This new article by Dr. Salla has been pointed out to me by several readers (thank you). And I feel he has hit several key points on the head. The Trump military government, as it stands now, is a temporary necessity to address and eliminate the Deep State. After that, hopefully the military will assume a role of protector and guardian of the U.S. people, and not simply an arm of a planetary military industrial conquest machine.

We offer below about a third of Dr. Michael Salla’s article, and the rest may be read at exopolitics.org.

“Something very profound happened in the U.S. on December 21 [2017] with the passage of President Donald Trump’s Executive Order Blocking the Property of Persons Involved in Serious Human Rights Abuse or Corruption. The Order declared a state of national emergency concerning human rights and corruption, and named specific individuals and organizations that would have their bank accounts and assets frozen regardless of where in the world the abuses had occurred.

Many have noted the Executive Order is far more significant than what it appears to be on the surface. Rather than just freezing the financial resources of foreign citizens linked to the Russian sphere of influence, as it superficially appears to do, it is really targeted at members of the Deep State – the shadow Government (the Satanic Cabal or the criminal group whose members are known by the name of Illuminati) that have been involved in human trafficking, pedophilia and systemic corruption all over the planet.

Jim Stone, a freelance journalist, writes: ‘The executive order is presented as a national emergency up front. At first glance, it reads like Trump is going after foreigners which are named directly in an annex at the end. That’s not what this is. The first part of the order only cements the second part of the order, to prevent American criminals from running away to foreign countries and being supported by foreigners.

To sum this up:
No swamp critter (reference to the miserable swamp of the Deep State that Donald Trump declared he wants to drain – editor note) can accept help from another swamp critter in getting away… Child traffickers and other human rights abuses are covered, the stealing of and misuse of government funds is covered, all items are covered for foreigners and U.S. citizens, any foreigners who have assets in the U.S. that have done anything against the U.S. for the purpose of supporting the American swamp will have those assets seized, anyone in violation of anything in this executive order will have their assets seized…’

An anonymous whistleblower using the pseudonym MegaAnon says that the Executive Order has led to many powerful members of the Deep State waking up with no financial resources.

‘Guess what? The swamp’s financials froze over while they all slept last night. This means they are going to have a loooong Christmas break… they were all broke before sunrise…
This covers kids/humans, drugs, arms/guns, weapons of mass destruction/chemicals/Uranium, organs, etc. Now if you want to know who in our swamp woke up with frozen accounts, foundations, so called charities, side businesses and shell organizations etc. dig into the Annex list…’ 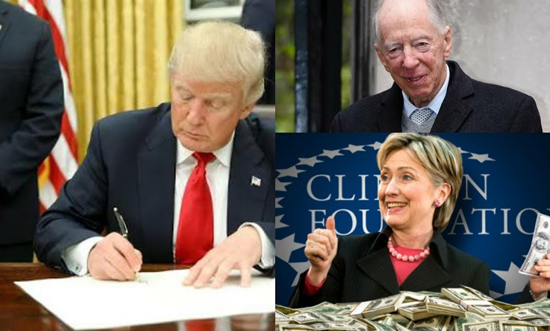 It’s no secret that Donald Trump has surrounded himself with senior military officers who share his desire to drain the swamp.

His Chief of Staff, John Kelly, is a retired four star USMC general; his Secretary of Defense, James Mattis, is also a retired four star USMC general; his National Security Advisor, James McMaster, is an active duty three star US Army general; his head of the National Security Agency, Mike Rogers, is an active duty four star Navy Admiral; the head of the Secret Service, Randolph Alles is a retired two star Marine General; and the list goes on.
Trump’s executive order and the language that he uses really marks an important event. In short, it marks a transfer of political power from the shadow Government to the US Army in terms of true control of the United States of America.

The next day, the Washington Post reported on a recommendation by the Intelligence Community and Pentagon in October 2016 to sack Rogers. President Obama’s Director of National Intelligence, James Clapper, and the Secretary of Defense, Ashton Carter, reportedly were dissatisfied with Rogers performance, including his visit to Trump: ‘In a move apparently unprecedented for a military officer, Rogers, without notifying superiors, traveled to New York to meet with Trump on Thursday at Trump Tower. That caused consternation at senior levels of the administration, according to the officials, who spoke on the condition of anonymity to discuss internal personnel matters.’

CIA Director John Brennon was a key player in the effort to remove Rogers as illustrated by the Washington Post story which is the traditional official news outlet promoting CIA interests. To his credit, President Obama did not take action against Rogers.

Now more than a year after these back stage maneuverings, Rogers remains at the helm of the NSA closely monitoring the global activities of the Deep State and advising Trump and his National Security team.

…Two branches of the CIA have long been the secret enforcers of Deep State as best illustrated in the Kennedy Assassination… Trump’s elevation of former congressman, Mike Pompeo, to become CIA Director was intended to bring the CIA under direct Presidential authority. Pompeo was, however, effectively sidelined from exercising any real power over the CIA’s covert operations… The situation dramatically changed on Saturday November 18, when a number of USMC helicopters flew over the CIA’s Headquarters in Langley, Virginia. A former FBI agent, Hal Turner confirmed through credible sources that the helicopters had ‘buzzed’ the CIA HQ for roughly 30 minutes. 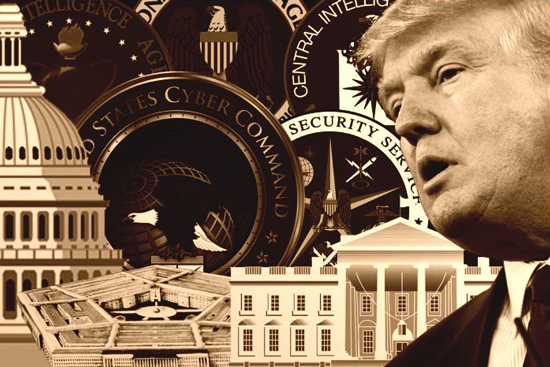 The intent was clear, the USMC was threatening the CIA’s clandestine services division to get on board with the Trump administration or else… The clearest sign that the CIA is now firmly under Trump’s control is President Putin thanking President Trump and Pompeo for thwarting a planned terrorist attack against a prominent St. Petersburg cathedral…

The way in which the Executive Order has been crafted for a specific target, and quietly enforced is that the U.S. military is wanting to keep much of what is occurring off the public radar. The primary reason for doing so is clearly to minimize disruption to the U.S. political system while the transfer of power takes place.

While removal of the Deep State and its corrosive global influence through human rights abuses and corruption is a welcome development, the outsized behind-the-scenes influence of the U.S. military in the Trump administration is a cause for concern in the long term. Predictably, disclosures that will occur throughout the remainder of the Trump administration will promote US national security interests largely defined through a military mindset.

While the mainstream media has largely ignored Trump’s Executive Order, the alternative media has been paying well-worth close attention. The language of the Executive Order is very open ended in terms of how international corruption and human rights abuses threaten US national security:

‘I, DONALD J. TRUMP, President of the United States of America, find that the prevalence and severity of human rights abuse and corruption that have their source, in whole or in substantial part, outside the United States, such as those committed or directed by persons listed in the Annex to this order, have reached such scope and gravity that they threaten the stability of international political and economic systems… The United States seeks to impose tangible and significant consequences on those who commit serious human rights abuse or engage in corruption, as well as to protect the financial system of the United States from abuse by these same persons.

I therefore determine that serious human rights abuse and corruption around the world constitute an unusual and extraordinary threat to the national security, foreign policy, and economy of the United States, and I hereby declare a national emergency to deal with that threat.’

Its Annex identifies key individuals and organizations, several of whom are clearly associated with Russia. The Executive Order is linked to the Global Magnitsky Human Rights Accountability Act that emerged from the murder of a prominent dissident exposing human rights abuses and corruption in Russia.

This linkage can easily lead readers into falsely believing that the Executive Order is solely intended to target corrupt Russian officials, and corruption and human rights abuses by countries in Russia’s sphere of influence.

Yet, as a number of alternative media sources point out, Trump’s Executive Order goes well beyond the Russian sphere of influence. It is really targeting the Deep State, and urgently fulfilling the US President 2016 campaign pledge to ‘drain the swamp’.”

Is Your Consciousness Flexible?