The vaccine was implicated in 93% of the deaths in the patients they examined. What’s troubling is the coroner didn’t implicate the vaccine in any of those deaths. 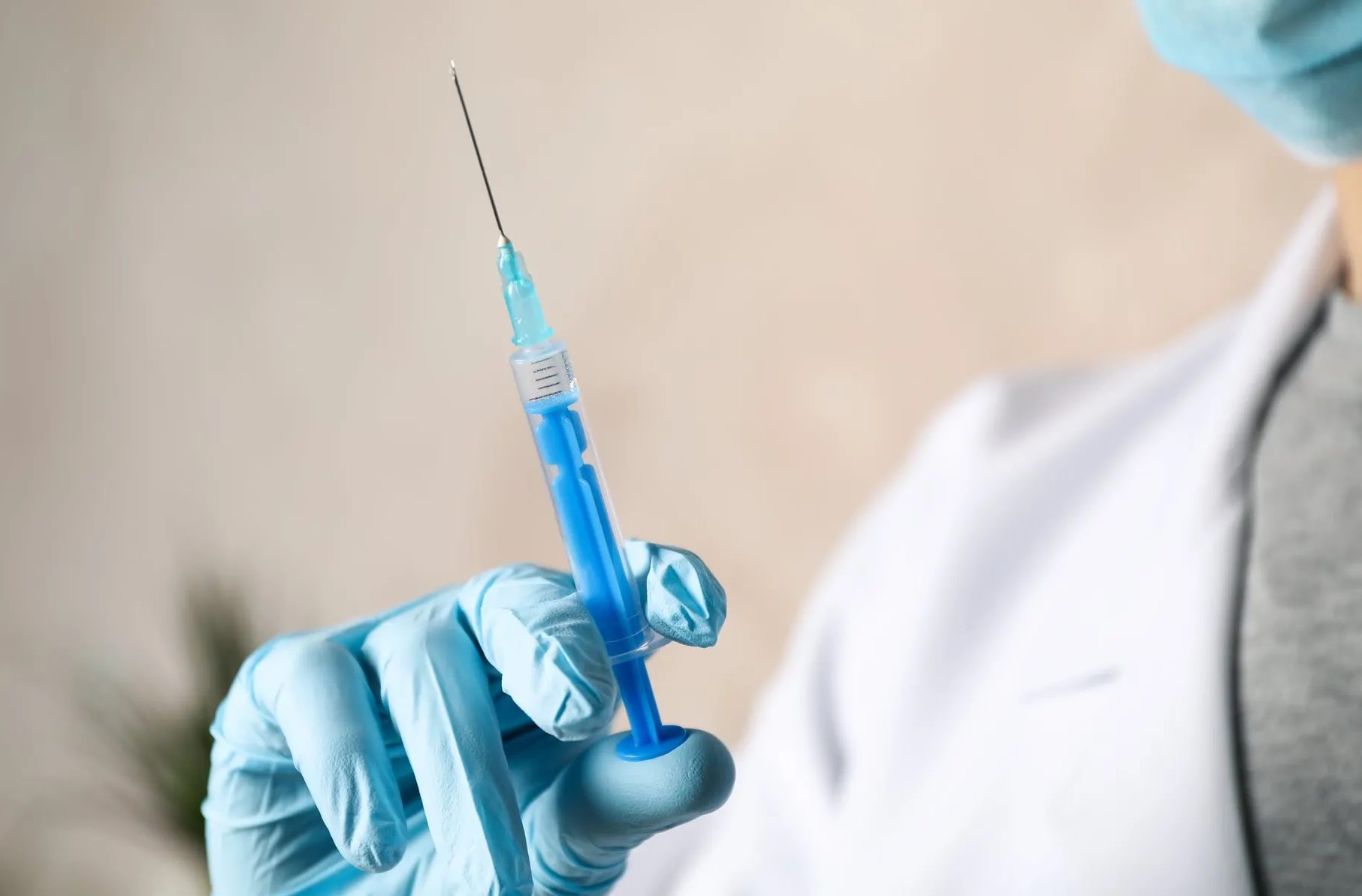 The vaccines are bad news. Fifteen bodies were examined (all died from 7 days to 6 months after vaccination; ages 28 to 95). The coroner or the public prosecutor didn’t associate the vaccine as the cause of death in any of the cases. However, further examination revealed that the vaccine was implicated in the deaths of 14 of the 15 cases. The most attacked organ was the heart (in all of the people who died), but other organs were attacked as well. The implications are potentially enormous resulting in millions of deaths. The vaccines should be immediately halted.

No need to worry. It is doubtful that anything will occur because the work wasn’t published in a peer-reviewed journal so will be ignored by the scientific community. That’s just the way it works.

I got an email recently from Mike Yeadon, former VP of Pfizer, who urged me to check out this video. He wrote me this email on 12/24/21:

Steve,
This is about the worst 15min I’ve ever seen.
Mass covid19 vaccination is leading to mass murder.”
Mike

The video references this paper, posted on December 10, 2021, “On COVID vaccines: why they cannot work, and irrefutable evidence of their causative role in deaths after vaccination” by Sucharit Bhakdi, MD and Arne Burkhardt, MD. It has been getting a lot of attention lately.

The authors did an autopsy in 15 patients who died (from 7 days to 6 months) after receiving the covid vaccine. These were all cases where the coroner ruled as NOT being caused by the vaccine. They discovered that in 14 of the 15 patients there was widespread evidence of the body attacking itself, something that is never seen before. The heart was attacked in all 14 cases.

A number of salient aspects dominated in all affected tissues of all cases:

– inflammatory events in small blood vessels (endothelitis), characterized by an abundance of T-lymphocytes and sequestered, dead endothelial cells within the vessel lumen;

– the extensive perivascular accumulation of T-lymphocytes;

– a massive lymphocytic infiltration of surrounding non-lymphatic organs or tissue with T-lymphocytes.

Lymphocytic infiltration occasionally occurred in combination with intense lymphocytic activation and follicle formation. Where these were present, they were usually accompanied by tissue destruction.

Here’s the video presentation of the results.

VAERS as well as other independent studies (e.g., see this vaccine injury paper) shows the vaccines are killing people and that cardiac events were highly elevated. This study is consistent with those results.

This work independently validates the analysis of Peter Schimacher who showed a minimum of 30% to 40% of the deaths after vaccine were caused by the vaccine. 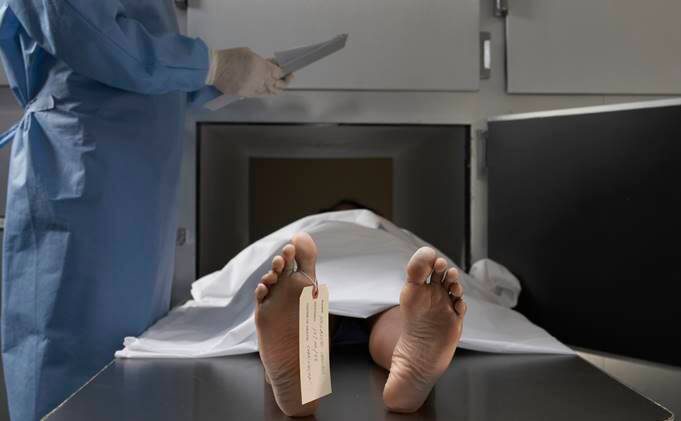 If the autopsy findings are confirmed by other pathologists with additional samples, and if they are combined with the findings of Dr. Hoffe (>60% inoculant recipients have elevated D-dimer tests and evidence of clotting) and Dr. Cole (increase in cancers after inoculation, including twenty-fold increase in uterine cancer), we are seeing a disaster of unimaginable proportions.

The conclusion (if supported by further data) is that essentially EVERY inoculant recipient suffers damage, with more damage after each shot. Given the seriousness of the types of damage (autoimmune diseases, cancer, re-emergent dormant infections, clotting/strokes, cardiac damage, etc.), these effects will translate into lifespan reduction, which should be counted as deaths from the inoculations.

So, in the USA, where ~200M people have been fully inoculated, the number of deaths will not be the 10,000 or so reported in VAERS, or the 150,000+ scaled-up deaths from VAERS, but could be closer to tens of millions when the inoculation effects play out!

What the above three findings (Burkhart, Hoffe, Cole, and I suspect many others who have not yet come forward) show is that the post-inoculation effects are not rare events (as reported by the media-gov’t), but are in actuality frequent events. They may be, in fact, universal, with the severity and damage different for each recipient.

The question in my conscience is whether it is possible to reverse these inoculation-based adverse events. Can the innate immune system be fully restored? Can the micro clotting be reversed? Can the autoimmunity be reversed? I have seen a wide spectrum of opinions on whether this is possible, none of which is overly convincing.

Are we headed for the situation where the ~30% unvaxxed will be devoting their lives to operating whatever is left of the economic infrastructure and serving as caretakers for the vaxxed?

I realize the above sounds extreme, and maybe when more data are gathered from myriad credible sources the results and conclusions may change, but right now the above data seem to synchronize with the demonstrated underlying mechanisms of damage. Additionally, we seem to be doubling down on inoculations, with fourth booster being proposed for Israel, and UK suggesting quarterly boosters. 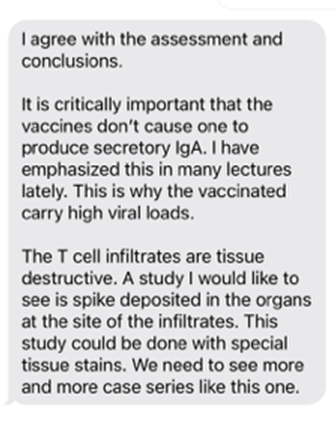 Background of two of the scientists behind the study

Dr. Suchrit Bhakdi has spent his life practicing, teaching and researching medical microbiology and infectious diseases. He chaired the Institute of Medical Microbiology and Hygiene at the Johannes Gutenberg University of Mainz, Germany, from 1990 until his retirement in 2012. He has published over 300 research articles in the fields of immunology, bacteriology, virology and parasitology, and served from 1990 to 2012 as Editor-in-Chief of Medical Microbiology and Immunology, one of the first scientific journals of this field that was founded by Robert Koch in 1887.

Dr. Arne Burkhardt is a pathologist who has taught at the Universities of Hamburg, Berne and Tübingen. He was invited for visiting professorships/study visits in Japan (Nihon University), the United States (Brookhaven National Institute), Korea, Sweden, Malaysia and Turkey. He headed the Institute of Pathology in Reutlingen for 18 years. Subsequently, he worked as an independent practicing pathologist with consulting contracts with laboratories in the US. Burkhardt has published more than 150 scientific articles in German and international scientific journals as well as contributions to handbooks in German, English and Japanese. Over many years he has audited and certified institutes of pathology in Germany.