Are you one of those people who obsessively washes their hands with anti-germ handwash and sprays the countertops repeatedly with hygiene cleaners? If so, it may come as a surprise to know that some scientists believe that this kind of obsessive cleaning could actually be making you sicker. 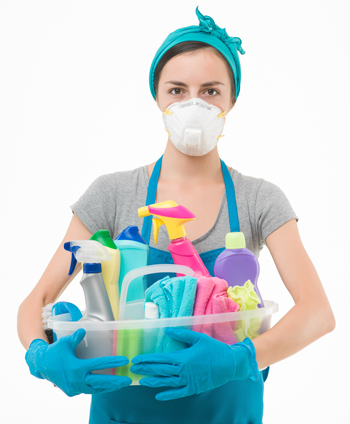 It may sound counterintuitive, but as reported by Science Daily, a group of researchers from the German Centre for Integrative Biodiversity Research (iDiv) have warned in an article published in the journal Nature Ecology & Evolution that rigorous cleaning interferes with the diversity of microorganisms in our bodies, potentially weakening immunity.

The iDiv researchers noted that ecosystems with high levels of biodiversity, such as forests and grasslands, are far more resistant to invasive species and other disturbances than lower diversity ecosystems. When these high levels of diversity are somehow diminished, the ecosystem is weakened, and functionality is reduced. This has been proven hundreds of times in animal and plant studies.

The iDiv team believes that much the same could be true of the high levels of biodiversity in the human body.
“We influence this micro-biodiversity on a daily basis, especially by combating it with, for example disinfectants and antibiotics — actually with the aim of promoting good health,” warned ecologist Robert Dunn, a professor associated with North Carolina State University and the University of Copenhagen.

In other words, in pursuing cleanliness and hygiene with the goal of improving health, we are actually interfering with the body’s self-regulating micro-biodiversity, creating exactly what we’re trying to avoid: poor health.
“This interference in microbial species compositions could impede the natural containment of pathogens,” explained Nico Eisenhauer, the paper’s co-author.

Why would being cleaner not mean better health?

So, why this apparent contradiction? Science Daily explained: “According to the ecological niche theory, plants and animals apportion the available resources in their habitat among themselves, whereby species with similar needs compete with each other. Newly arriving species find it hard to gain a foothold, at least in a stable ecosystem. However, in species-poor ecosystems or those disturbed by humans, non-native species can invade much more easily.

Microorganisms also form their own ecosystems. So far, more than two hundred thousand species are known to live in human dwellings as well as on and in human bodies. Bacteria in human dwellings account for half of these, and thousands of bacteria live on our bodies. In addition, there are around forty thousand species of fungi in our homes, although these are less likely to be found on human bodies.”

Eisenhauer explained that pathogens in our environment can be compared to the invasive species found in nature. Increased use of disinfectants and antibiotics could facilitate their dispersal through the body by interfering with the natural species balance of the body.

It is also important to note that very few of the pathogens found in our environment can make us ill. And, as distressing as it might be to some, the little “creatures” in our homes – like spiders and other insects – should be left in peace to exterminate other, disease-causing critters like house flies, cockroaches, bedbugs and mosquitoes. In this way, they perform a valuable function in helping to protect the balance of our ecosystem.

The researchers noted that further studies are needed to confirm their theory. In the meantime, when you do clean, remember to avoid dangerous chemical cleaners and use natural, environmentally-friendly products instead.

Have some whole grains: Study confirms that dietary fiber can lower your risk of colorectal cancer, diabetes and stroke