Larrea divaricata, more commonly known as chaparral, is a plant widely used in South American folk medicine because of its anti-inflammatory properties. A group of researchers conducted a study on whether an aqueous extract of this plant can be used to treat oxidative stress in the submandibular glands of diabetic rats. 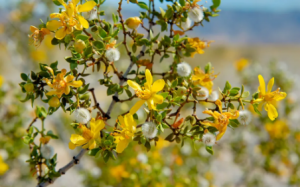 The effect of the L. divaricata aqueous extract on the pro-oxidant and antioxidant homeostasis in the salivary glands of healthy rats has also been studied.

But researchers from Argentina’s Universidad de Buenos Aires and the Instituto de Investigaciones Biomédicas UCA-CONICET noted that the effect of the L. divaricata aqueous extract on the homeostasis in submandibular glands subjected to the effects of an oxidative stressor has not yet been studied. The results of their animal study was published in the journal BMC Complementary and Alternative Medicine.

For their study, the researchers divided 40 female albino Wistar rats into two groups. One of these was a control group and the other was injected with 60 milligrams per kilogram of streptozoticin (STZ), a known oxidative stressor. STZ has been shown to generate an imbalance between oxidative and antioxidant systems by decreasing the secretion of peroxidase in submandibular glands. After 10 days of treatment, blood samples were taken from veins in the rats’ tails to determine glucose levels. Those with glucose levels of over 300 milligrams per milliliter (mg/ml) of blood were selected from the STZ group. The submandibular glands of the rats from both the control and STZ group were incubated with either 500 micrograms per milliliter (μg/ml) of the aqueous extract or 1.5 μg/ml of NDGA.

For the aqueous extract, the researchers air-dried L. divaricata leaves. They then infused 750 milligrams (mg) of the dried leaves for 20 minutes with 10 milliliters (ml) sterilized boiling water. To quantify the amount of NDGA, the researchers conducted high-performance liquid chromatography (HPLC). This resulted in the production of NDGA.

In addition, they noted that the aqueous extract decreased the levels of malondialdehyde and protein carbonyl groups while also modulating the reactive oxygen species levels.

Based on the results of their experiment, the researchers concluded that the aqueous extract of L. divaricata is capable of reversing oxidative stress induced by the administration of STZ in the submandibular glands of rats.

As such, they concluded that the aqueous extract could be used as a local or systemic preventive agent against oral diseases caused by oxidative stress in diabetic subjects. That said, they acknowledged that further studies are needed to confirm this.

The history of population control is important