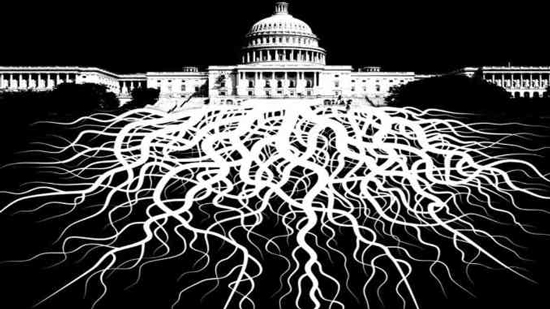 There are no more options for the NWO ruling cabal!

NONE of these harebrained schemes will work anymore for the Illuminati and their omnipresent Axis of Evil.
Just as Pizzagate is catching up with the U.S. establishment, Pedogate will catch up with the world shadow government. It ought to be clear to every resident of planet Earth that the New World Order ruling cabal has been thrown into complete disarray. That the Illuminati plot to install an overt One World Government is in absolute chaos. Their multi-century agenda to foist a state-sponsored One World Religion on humankind has been thwarted. And their many conspiratorial plots to depopulate the world have failed dismally.

The bottom line is that those who populate the peak of the pinnacle of the planetary power pyramid are clueless about how to proceed given the following state of affairs:

1. Russian President Vladimir Putin will not be goaded into a World War III scenario. When the deployment of just one electromagnetic pulse bomb can knock out grid USA, really how would even nuclear war look like… without a functioning electrical grid. The Kremlin also has access to Tesla-inspired, scalar-wave weaponry that has not even been imagined by the U.S. Military-Industrial Complex.

2. The stock market can be forced into a precipitous decline by way of a controlled demolition similar to 2008; however, this time the guilty financial terrorists and economic saboteurs will be prosecuted to the fullest extent of the law. In other word, the whole world now knows that all financial crashes and economic collapses have been meticulously fabricated by the banksters.

3. The Second Great Depression has been ongoing since 2008 after having been triggered by the 2000 dot-com collapse (dot-com bubble was a historic economic bubble and period of excessive speculation that occurred roughly from 1997 to 2001, a period of extreme growth in the usage and adaptation of the Internet by businesses and consumers) and the 9/11 War on Terror. Hence, there’s no stopping the natural breakdown of the Global Economic & Financial System (GE&FS). Certainly the best financial engineers know this, as well as understand their utter impotence to avert the final blow out.

All of the other apocalyptic events highlighted above ought to be easily seen as practical impossibilities for the Illuminati to implement, especially at this late date as their Global Control Matrix literally self-destructs in real time.

Now many will quickly protest that there is nothing from stopping the NWO cabal from executing a total yet perfectly controlled demolition of the Global Economic & Financial System. And they are right.

However, if the international banking crime syndicate (aka banksters) tries this little move one more time, their whole monopoly game goes away forever. In other words the people throughout the entire planetary civilization will never again permit them to run their fatally flawed game. After all, the banksters have been outed like never before and now await a fate similar to the aristocracy during the worst years of the French Revolution.

The Internet has simply allowed for the dissemination of so much raw truth and hard facts about the true workings of the GE&FS. We all now know who they (the banksters) are, what they have done in the past, and where they live now. We also watch their silly false flag operations flop every other day. Some of us actually predict their nefarious deeds before they carry them out.

Who is not familiar with the wreck and ruin wrought on the planet by the Rothschilds and the Rockefellers? By Big Pharma and Big Oil? By Monsanto and Halliburton? They are all known by their actions and can no longer hide, especially with so many interlocking directorships which mutually incriminate them all.

With so much extremely damning evidence uploaded to the Internet since 1995, the folks who own and operate the GE&FS are all exposed like never before in history. Should they attempt to take down the GE&FS to their benefit yet, again, they will be hunted down and hung from the nearest tree — for real. The American people want justice like never before… as their pension plans, IRAs, Keoughs and other retirement accounts have been gutted–look out!

The current state of the economy, both national and global, is such that everyone’s thinking about when the other shoe will drop. In their fear and apprehension about what the future may bring, many common folk are researching and investigating like there’s no tomorrow. That’s because – on some level – they know that there may not be a tomorrow.

The product of their sleuthing has put the banksters in their crosshairs. Who doesn’t know that behind the banksters stand many more clandestine operators who are even more culpable of enslaving and harming humanity? That covert, ubiquitous network is known as Deep State.

More than any other thing in recorded human history, the Internet has created a much more level playing field. Of course, this is anathema to the Illuminati as they have always been on top and will never tolerate anything but a tilted playing field. In this fashion, they are always playing with our money and our time and our energy and our real estate and our gold and other valuable assets.

Were the cabal’s financial engineers and economic architects to carry out a controlled demolition, they would guarantee themselves a lifelong cell at Guantanamo. Yes, things have really changed that much; it’s just that most don’t know it yet.

More than any other monumental event of the past years, the election of Donald Trump illustrates just how much things have really changed. Even BREXIT pales in comparison to Trump’s improbable victory. Therefore, the writing is on the wall which clearly messages the ruling elites that their game of greed and money and power is over – forever!

Should they deign to be so stupid as to pull the plug on the GE&FS, forces will step in to short-circuit their nefarious plans and maintain order. More significantly, such a convicting pretext will have been presented to frog march the perps out of their alpine hideaways and seaside villas and into the nearest prison cell.

It will again be the Internet that will empower the inhabitants of Earth to police the planet so that the banksters never set foot in a bank again. Just as a global citizen’s investigation has been underway regarding the Washington, D.C. Pizzagate and global Pedogate scandals, people power is emerging in ways and places never seen before.

Pizzagate: A Special Report on the Washington, D.C. Pedophilia Scandal

The Pizzagate revelations, which are coming out fast and furiously because of the power and pervasiveness of the Internet, are creating a very conducive environment for the powerless to take back their power. Pedogate has likewise created an international forum for victims everywhere to speak their truth to power like never before. Truly, Pizzagate / Pedogate will provide the lynchpin for the malevolent global power structure.

The Illuminati, the Neocons, the Zionists and Alien-Human Hybrid Controllers

The ultimate disposition of this criminally insane cabal of psychopaths is the only remaining challenge for the global village to meet straightaway.

Where will the world be safe with the likes of these entities still on the loose? Who would volunteer to house such a dangerous group of genocidal murderers, incorrigible kleptomaniacs, profiteering warmongers, and serial producers of chaos and pandemonium?

This difficult question, then, is one that must be answered decisively and swiftly. Many commentators have spoken of a negotiated truce with these monsters, as though the planet is big enough for them and us to peacefully co-exist. No, not quite!

In any event, now that they have no place to go once they have been stripped of their ill-gotten gains and misappropriated wealth, their influence and power over the affairs of men will be greatly diminished. Nonetheless, the wheels of justice must be allowed to turn so that their billions of victims can rest safely and soundly.
Perhaps an off-planet penitentiary can be found that is within the legendary waterless region. Actually, they will probably find a way to wreck that realm as well.

Incidentally, just who is it that belongs to the Deep State network? It would be much easier to identify who isn’t a part of that VERY exclusive club. The following graphic is a good place to start. 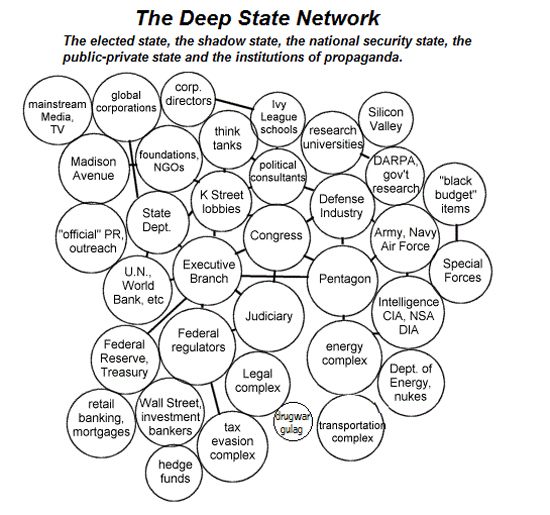 The critical point of this article is that the powers that be (those who run the Deep State) cannot crash the economy like they have always done, timed according to the Shemitah calendar. If they are so reckless and ignorant as to try to provoke a coordinated collapse, then they, too, will lose everything. And they will never get it back. Once the financial institutions are destroyed and economic systems devastated, they, too, will lose their age-old power and influence. The United States will be compelled to consider a whole new paradigm, specifically one that is free from the endemic corporate corruption and easily manipulated institutional arrangements. The banksters should be refused participation and prosecuted for their endless financial terrorism and economic devastation of nations large and small. Then, there will be no place for economic hitmen and financial terrorists who are employed by the powers that be to take down countries rich and poor.

As a healthy brand of nationalism spreads to the four corners of the planet, the sheer power and momentum may be enough to keep the cabal in check until they are dealt with appropriately.

Perhaps the best thing for President Trump to do now is to shut down the treasonous Mainstream Media. He must also remove the numerous traitors from Congress and intelligence agencies, as well as from the many other departments which comprise the U.S. Federal Government.

The sooner Trump takes these initiatives, the sooner the American people can take back their government. As an unrivaled change agent, his work will be largely dedicated to tearing down the highly offensive Obamanation. In that capacity Trump ought to bring his wrecking ball everywhere he goes until the Obamanation has sufficiently fallen into its own footprint, so that the American Republic can be rebuilt.

Every good builder knows that the better the demolition, the better the foundation for the new edifice to be built upon. With this crucial understanding, the first thing to go must be the GE&FS. The world has been transformed into a financial prison as it has an economic jailhouse for most of humanity.

May the patriotic nationalists of the world rise up quickly to consolidate the gains that have been thus far been made. Only through a concerted effort will a complete emancipation from these warlords and wardens be possible. Deep State must be dismantled so that the New World Order can be terminated, once and for all.
Were the people of good conscience to coalesce around the same Earth rehab plan, the serial obstructionists wouldn’t have a chance to sow their seeds of discontent. Why is it that the bad people are working together more efficiently than the good people? One would think that a righteous cause like saving planet Earth would galvanize a movement like no other in modern history.