Back pain can be one of the trickiest types of pain to deal with. Even mild pain in your back can restrict your movements dramatically, and strong pain in your lower back could even render you unable to get out of bed. Some people report that painkillers don’t work for their back pain, while those aware to the dangers of these drugs often prefer to avoid them altogether. This leads many people to seek out exercises that can alleviate back pain. While this can be a good remedy, a review that was recently published by the Cochrane Library has revealed that there is an even better solution: yoga. 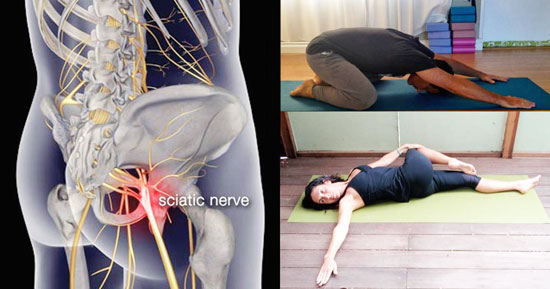 The group found that yoga was actually twice as likely to improve back pain as traditional back exercises. It also helped to improve the general physical quality of life of back pain sufferers. The breathing and stretching exercises involved in yoga not only ease the agony of back pain, but also improve sufferers’ mobility. This is particularly useful for those who suffer from chronic back pain that lasts longer than three months and recurs.

The study was carried out by researchers from the University of Maryland, who looked at data from a dozen clinical trials that involved more than 1,000 people in total. Subjects were between the ages of 34 and 48. One group attended yoga classes ranging from 45 to 90 minutes in length no more than twice a week. They carried out yoga exercises that were specifically developed for lower back pain under the instruction of experienced practitioners. These people were then compared to those who did back-specific exercises or none at all.

Six months into the study, those who participated in yoga were more than twice as likely to note clinical improvements in their condition, than those in the other groups. The subjects who did yoga also saw a 26 percent improvement in their overall physical quality of life.

Other studies back up yoga’s effectiveness for back pain

This study is supported by another one carried out by the Group Health Cooperative Center for Health Studies in Seattle. In that study, 101 adults who suffered from back pain were divided into groups. One group practiced a gentle type of yoga known as viniyoga for 75 minutes per week. The second group participated in standard physical therapy exercise classes, while the third group read a book about back pain.

In that study, the people who practiced yoga also needed less pain medication. After 12 weeks, the percentage of this group who needed pain meds dropped from 60 percent to 21 percent. The exercise group noted a minimal drop in the need for pain medication, while the group who only read the book actually noted a rise in those needing pain meds from 50 percent to 59 percent.

The potential to reduce people’s need for painkillers makes yoga worth trying, particularly for those who are simply suffering through the pain because they refuse to take these dangerous drugs. It is vital to seek out an experienced instructor if you are learning yoga to relieve back pain.

Other natural back pain remedies

There are other ways that people can help diminish the discomfort of back pain. For example, the natural anti-inflammatory properties of omega-3 fatty acids like those found in chia seeds can help. Relaxation techniques like meditation can also help reduce pain.

With lower back pain being the most common cause of work-related disability, and Americans spending a reported $50 billion each year on such pain, one can only hope that more doctors will start suggesting yoga to back pain patients instead of writing out prescriptions for painkillers that often don’t work and tend to do more harm than good.