The lead scientific paper examining the #1 cause of death during Spanish Flu explains that the #1 killer during that pandemic was NOT the Spanish Flu virus. It was bacterial pneumonia. 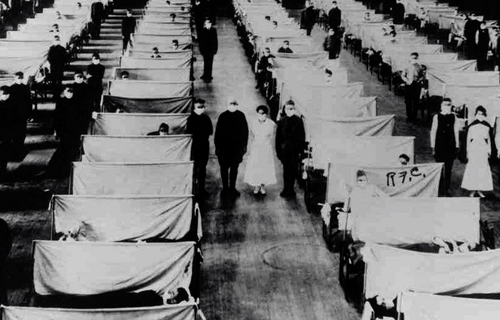 Dr. Anthony Fauci and colleagues wrote in 2008 a paper determining that victims of the 1918 Spanish flu died from bacterial pneumonia brought on by the flu. In an effort to inform, at the time of 2008, on better pandemic preparedness, Fauci and two colleagues – Drs. David Morens and Jeffery Taubenberger – looked at lung tissue and autopsy samples taken from 1918 Spanish flu victims as well as other published findings from the time. The group discovered many types of bacteria known to cause pneumonia.

“The majority of deaths during the influenza pandemic of 1918-1919 were not caused by the influenza virus acting alone”, report researchers from the National Institute of Allergy and Infectious Diseases (NIAID), part of the National Institutes of Health. “Instead, most victims succumbed to bacterial pneumonia following influenza virus infection. The pneumonia was caused when bacteria that normally inhabit the nose and throat invaded the lungs along a pathway created when the virus destroyed the cells that line the bronchial tubes and lungs.”

The published report underlines “clearly and consistently implicated secondary bacterial pneumonia caused by common upper respiratory flora in most influenza fatalities,” says Dr. Morens. “Pathologists of the time”, he adds, “were nearly unanimous in the conviction that deaths were not caused directly by the then-unidentified influenza virus, but rather resulted from severe secondary pneumonia caused by various bacteria”. “Absent the secondary bacterial infections, many patients might have survived”, experts at the time believed.

The results were compared against tissue and bacterial samples obtained from later pandemics, particularly the Asian flu pandemic of 1957 and the Hong Kong flu of 1968, since both viruses responsible were descendants of the Spanish flu. Deaths from these later pandemics also appeared to be associated with bacterial pneumonia, but Fauci and his colleagues noted there were differences in the “spectrum and extent of secondary bacterial pneumonia,” likely due to advancements in medicine, such as antibiotic and influenza vaccination, and demographic and social factors. “Indeed, the availability of antibiotics during the other influenza pandemics of the 20th century, specifically those of 1957 and 1968, was probably a key factor in the lower number of worldwide deaths during those outbreaks”, notes Dr. Morens.

In present days, instead of being able to breath out normally and exhale bacteria away from your nose, it seems that a mask trap it in there and force it back into the lungs. CW.AU.edu confirms that “when you are breathing out in a mask, the bacteria from your mouth gets trapped” – Miranda Mellos, a registered nurse in a level 2 trauma center emergency department in Montgomery, said. Mellos also warned that this bacteria irritates the skin and that “the only way to combat this is to make sure you change your masks out frequently and wash your masks frequently as well.” 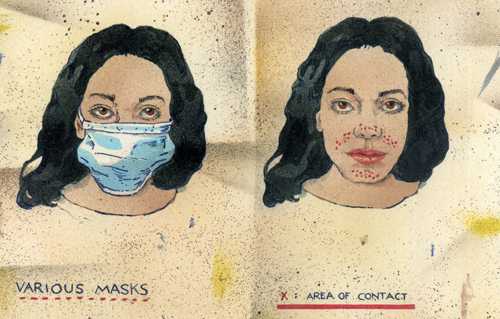 Novant Health recommends that ‘maskne’ – a term coined for breakouts caused by a mask’s hot, humid environment – can also be prevented by avoiding fabric softeners or harsh detergents. A major ingredient in most fabric softeners is quaternary ammonium compounds, which fight against static but have also been found to cause skin and respiratory irritation, according to a study done by the NYU School of Medicine. Earnest Dempsey explains: “You are told to wear a mask to prevent coronavirus infection. But do you know that wearing masks can cause way more dangerous, even life-threatening health effects as shown by scientific studies and professional observation of medical experts?”

While the authorities worldwide have thoughtlessly imposed wearing face masks on unsuspecting public, medical doctors critical of the establishment’s health policies are speaking up against the mask mandate and citing health risks associated with wearing masks.

In August, Dr. James Meehan warned of the serious health risks that come with masks at a press conference, the video of which was posted in The Activist Post. He summarized the health risks associated with wearing masks, ranging from skin infections to bacterial pneumonia. Dr. Meehan said that reports from around the world are pointing at a notable rise in bacterial pneumonia among people using masks. He said such health issues arise when people suffer reduced oxygen supply due to wearing masks. He also told of an incidence where one patient wearing a mask passed out due to low oxygen while at work and fell off a ladder, resulting in serious physical injuries.

The Activist Post wrote that Dr. Meehan and other concerned doctors as well as some business owners have filed a lawsuit against the mayor and health department of Tulsa over their mask mandates. The business owners say in light of the science showing the health risks associated with masks, they do not want to put their employees at risk by enforcing the mask mandate required by the city.

In related news, few months ago, The New York Post reported on the oral health damage associated with wearing masks. Dr. Rob Ramondi was cited by the paper telling that they are seeing patients with no previous history of oral diseases develop decaying teeth and diseased gums due to wearing masks for long hours, a condition the doctors dubbed “mask mouth”.

Berkeley.edu even published these shocking details: “Mask skepticism was officially sanctioned by the Surgeon General of the US Navyin a 1919 report:
“No evidence was presented which would justify compelling persons at large to wear masks during an epidemic. The mask is designed only to afford protection against a direct spray from the mouth of the carrier of pathogenic microorganisms … Masks of improper design, made of wide-mesh gauze, which rest against the mouth and nose, become wet with saliva, soiled with the fingers, and are changed infrequently, may lead to infection rather than prevent it, especially when worn by persons who have not even a rudimentary knowledge of the modes of transmission of the causative agents of communicable diseases.” – Epidemiological and Statistical Data, US Navy, 1918, Reprinted from the Annual Report of the Surgeon General, US Navy, (Washington, DC: Government Printing Office, 1919, p.434).”

Although the Surgeon General of the US Navy acknowledged that wearing masks by hospital staff was good practice, “the morbidity rate, nevertheless, was very high among those attending the sick,” and may only have prevented infection from a direct, close hit from a cough or sneeze of a patient. The protocols followed in the contagious annex of the US Naval Hospital in Annapolis, MD, were sufficient to prevent cross-contamination of “cerebro-spinal fever” (aka meningitis), diphtheria, measles, mumps, scarlet fever, and German measles. Not so with influenza. In fact, the infection rate of staff was as high in the high-protocol wards as in the improvised hospitals. “In one improvised hospital at the Navy Training Station in Great Lakes, IL., the infection rate was higher among those corpsmen and volunteers who wore masks than those who did not!”