If the socialists, globalists, Deep State were hoping President Trump would go quietly into that dark night, they are sadly mistaken. If kabala was praying that Trump would cower in obscurity after November 2020, their prayers have not been answered. If the globalists were dreaming that Trump and the Trumpsters would never be heard from again, their dreams have become a nightmare. 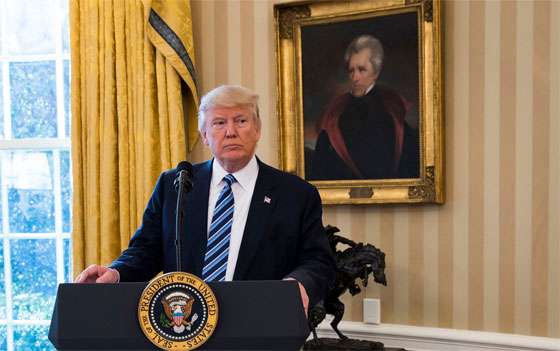 Rather than looking like John Adams or Jimmy Carter or Bush 41, Trump is showing a remarkable resemblance to President Andrew Jackson. The political histories are remarkably similar. As we approach the first 100 days since Biden was suspiciously placed into office, President Trump and the MAGA nation have done anything but concede, anything but beg for forgiveness, and anything but accept the fraudulent results of the 2020 presidential election. As Trump might quote Andy Jackson, these first 100 days with Biden resemble another “corrupt bargain,” and he’s not going to stand for it. It appears that patriots are not going to stand for it, either.

Trump has summoned politicians, donors, Trumpsters, MAGA nation, and potential rivals to Mar-a-Lago to map out the political future. Trump is endorsing governors, congressmen, senators, attorneys general, and secretaries of state. Trump appears to be all in for the off-year elections of 2022 and the presidential election of 2024, and he wants to make sure he controls as many of the chess pieces as possible.

By doing this and appearing so certain, Trump freezes the rest of the possible GOP candidates for 2024. They cannot move if there is a likely Trump candidacy for re-election in 2024. The most obvious examples of this are Nikki Haley and Mike Pence. Trump is supporting “his” populist candidates, building up plenty of political IOUs and favors, and aiming to build a framework, legal system, and culture such that the presidency cannot be stolen from him again.

This is much like what Andrew Jackson did between 1824 and 1828. When Donald Trump took the office of president in January of 2017, one of the first actions he did was to put up a bust of former president Andrew Jackson. A current president giving a shout-out to President Jackson seemed odd. Old Hickory certainly is not much favored in today’s woke history and politically correct politics. But upon further analysis, Trump and Jackson do seem similar.

Jackson was a populist; put America First; loved America; was foul-mouthed; despised the corrupt ruling class despite his own wealth; and was insanely hated by the Washington, D.C. permanent class. Trump like Jackson, was never accepted by the refined and cultured circles of the D.C. elite.

One aspect President Trump did not know back in January of 2017 was just how much he would be like Old Hickory – especially when it came to running for president and a corrupt bargain by his enemies costing him a questionable election. In the elections of 1824, Jackson and three others ran for presidency. Jackson had the most popular votes as well as the most Electoral College votes – but not enough Electoral College votes to win. John Q. Adams was able to convince Henry Clay to give Adams all of his electoral college votes. And soon after that, Adams gave Clay the position of secretary of state. So, within this corrupt bargain, Adams became president, Clay became secretary of state, and Jackson became mad as hell. Jackson called out this “corrupt bargain” for four long and bitter years. The masses, the populists of that time, felt that Jackson had won, and thus they had been cheated out of their own votes.

History repeats itself because human nature does not transform. The corrupt bargain today centers on the globalist mass media (CNN, MSNBC, ABC, N.Y. Times, Washington Post) and Big Tech (Google, Facebook, Twitter, YouTube, Amazon) and their collusion with the Deep State of Washington, D.C. The usual suspects of the corrupt media and the oligarchs of Big Tech in Silicon Valley have done two desperate acts that were clearly unfair, borderline illegal, and certainly unconstitutional to hurt Trump’s re-election chances of 2020. First, they reported non-news or unfounded news or simply fake news against Donald Trump for five years to make him look bad. Second, they refused to report any real and accurate negative news that would hurt Joe Biden’s candidacy. Not a word about Biden’s diminished cognitive skills, China’s blackmailing of the Biden family, Hunter Biden’s reported felonious behavior, or Biden’s misogynistic behavior. All censored for political reasons – for five straight and unyielding years.

In the writing of history, almost as important as what the historian writes is what the historian does not write. In the history books, what is not put on the written page is as crucial as what is written. Big Tech and the Progressive media did not want anything on the written page that negatively affected Biden’s chances. They censored unauthorized critical information. This censorship of real news probably changed the course of history. Certainly, today’s corrupt bargain’s censorship and Pravda/TASS type of behavior changed the 2020 election result outcomes.

Only impending events – such as Biden’s psychic state, the illegal alien border crisis, Chinese/Biden corruption, turning American backs on Israel, or a Chinese invasion against Taiwan – will determine the exact results of this modern-day corrupt bargain.

A collusion by the elites, oligarchs, and the Deep State that stifles “unauthorized” free speech; censors real news; casts questionable, fraudulent ballots; and then tells the masses to “sit down and shut up or else” tends to make 80 million voters want to do actions they normally would never consider.

Andy Jackson came back four years after the first corrupt bargain to win the presidency in the elections of 1828 and then 1832. Only time will tell whether today’s Corrupt Bargain II will end as favorably for President Trump and MAGA nation as it did for President Jackson and the people of his time. As always, at the end of the day, in a democratic republic, it will be up to the American people… hopefully.