Elites throw sex slaves to the gators. Horrific testimony by Turkish victim lays bare the sadistic and psychopathic world of the criminal elite

Just when you thought the Jeffrey Epstein / Ghislaine Maxwell saga couldn’t wreak of more elitist wickedness. Testimony from a Turkish National known anonymously as Jane Doe reads like a chapter from a Hunter S. Thompson novel. 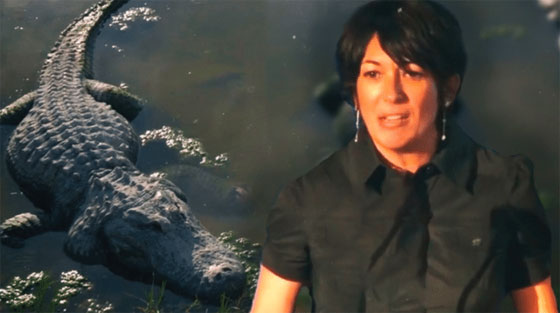 The allegations came during the heyday of the Bush Crime Family Era, as the Telegraph writes, “A new alleged victim of Jeffrey Epstein has come forward with claims she was repeatedly raped by the financier and Ghislaine Maxwell in front of her son and threatened with being “thrown to the alligators” if she spoke out….”

Ms Doe, a married Muslim woman from Turkey, said she met Mr. Epstein and Ms. Maxwell at a barbecue hosted by her employer in late 2006 or early 2007. The employer is not named in the lawsuit, which states that Ms. Doe was told that Mr. Epstein wanted to buy or rent a property. Ms. Doe found a $10,000-a-month rental for him. The suit says Mr. Epstein wanted to hire Ms. Doe and tried to convince her with lavish gifts and a promise of “highly-placed” work, The Miami Herald writes.

Ms. Doe, a trained hairdresser, allegedly went to his Palm Beach estate in January 2008 to cut his hair, but when she got there, she claims Mr Epstein was naked and proceeded to “brutally rape” her with Ms. Maxwell’s help. The Miami Herald reported, “She attempted to leave, telling them she intended to report the rape. Maxwell, in response, claimed that she had already called the police. Two men who claimed to be police officers arrived at Epstein’s mansion and threatened to arrest Doe for prostitution, to take away her son and deport her, according to the suit.”

“After the alleged abuse, the pair reportedly drove the woman to pick up her 8-year-old son and stopped the car ‘at a large body of water that was infested with alligators,’” the lawsuit states.

The filing adds: “Epstein then ushered the Plaintiff to the body of water and told her in explicit detail that, as had happened to other girls in the past, she would end up in this body of water and be devoured by the alligators, should she ever reveal what Epstein had done to her.”

Ms. Doe claims she was trafficked over the next five months under threats of deportation, murder, arrest for prostitution, or that her son would be taken from her, The New York Post reported.

After the alligator threat, the suit alleges that Ms. Doe was checked into a hotel in Naples, Florida where “over a period of several days, Epstein and Maxwell repeatedly raped and sexually abused the plaintiff, all in the presence of her son,” the Telegraph reported.

Ms. Doe looked to be much younger than 26 and was told to tell men she was trafficked to that she was actually 17. The lawsuit adds that she was forced to have vaginal reconstructive surgery. It was carried out “in a wealthy person’s home by a man with a Russian accent,’’ in order to “create the false impression that she was a virgin for a ‘high-profile’ client,” the lawsuit says. The filing states that she was left with permanent injuries.

Jane Doe’s nightmarish tribulation details how any innocent person can be captured and enslaved by the hidden elite establishment. A power mad few, immune to the laws due to their influence and the currency of corruption using human beings for their own amusement.

COVID-19: an overview of the evidence