There’s no question that the high-fat Western diet contributes to obesity – just take a look around you in any public place and you’ll find all the proof you need. However, all this unhealthy eating is affecting more than just people’s waistlines and heart health; Irish researchers have now found that it is also raising people’s risk of infectious disease as well as food poisoning. 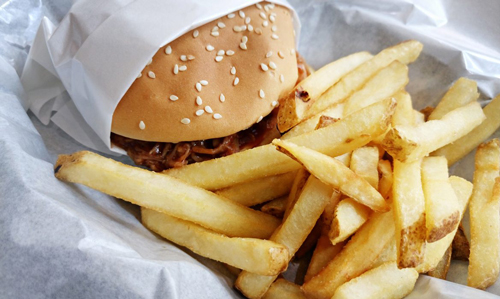 Researchers from University College Cork made the interesting discovery after a study in which they fed mice a Westernized diet that was high in fat and low in fiber. In the diets of some of the mice studies, 45 percent of their total caloric intake came from fat, while others were fed either a matched low-fat diet that got 10 percent of calories from fat or regular chow that had 18 percent of calories from fat for comparison. They discovered that the high-fat way of eating affected not only their immune system but also their gut bacteria.

If you think you can get away with a few days of bad eating here and there, think again. The researchers found that even the short-term consumption of this type of diet led to profound changes in the immune system as well as the composition of microbiota, reducing the immune system’s efficiency when it comes to fighting infectious diseases in the gut.

Watch out for listeria if you eat a lot of fat

The high-fat diet also raised the number of cells in the gut known as goblet cells, which are targeted by listeria for infection. Listeria is a bug that causes food poisoning, and it can live and grow in foods like melons, prepackaged sandwiches, butter, and some types of soft cheese. It can cause serious illness, especially in people with weakened immune systems, the elderly, and pregnant women.

A listeria outbreak was responsible for the avocado recall recently that affected California avocados in six states. The disease is marked by a high fever, body aches, diarrhea, stomach pain, nausea, and intense headaches. In the U.S., food recalls have grown by 10 percent during the last five years on account of the threat of dangerous infections – and this could well be related to the poor American diet.
Not surprisingly, the researchers also discovered that this way of eating raised the levels of a bacteria in the gut associated with obesity known as Firmicutes. Their findings were published in the journal Microbiome.

The Western diet is generally considered to be one that contains lots of fatty and processed foods. It’s marked by a high consumption of red meats, saturated fats, junk food and empty carbohydrates, as well as a low amount of fresh vegetables and fruits, seafood, poultry and whole grains. In addition to obesity and infectious disease, it has also been linked to problems like heart disease, hypertension, and dementia.

Recent studies have also demonstrated its connection to colorectal cancer. According to a study published in Nature, a diet that is high in fat essentially makes the cells of the intestinal lining more prone to cancer.

Of course, not all fats should be feared. The fats found in fried foods, for example, might be bad news, but all fat is not created equally. In fact, foods like avocados, extra-virgin olive oil, eggs, full-fat yogurt and nuts are very nutritious and healthy and should not be avoided. As always, it’s important to ensure your diet is balanced and that any particular type of food does not dominate your eating habits. Generally speaking, it’s hard to go wrong when eating food that is as close to its natural state as possible.

No Studies Show 5G Is Safe. Satellites Being Sent Into Space To Blast Earth with It Anyway