Linderman Unleashed: Chemtrails, aluminum particles and the damage they cause to the brain

On the January 19 episode of Linderman Unleashed, Kurt Linderman puts Dr. Russell Blaylock on the show to discuss chemtrails and what it does to the human brain. Blaylock noted that he has also written several articles about the effects of the adjuvants and vaccines, including their mercury and aluminum content, on humans. In addition, he has done a fair amount of writing and research on the effect of aerosolized chemicals when inhaled by people. 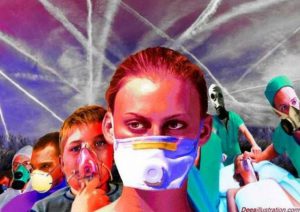 “What we knew was that these particles tend to travel along the olfactory nerves, which are the smell nerves and the nose,” he said. “And it travels directly to the part of the brain that has to do with memory and emotions, the hippocampus, the internal area and the prefrontal cortex, and that you can trace these chemicals traveling along that nerve and depositing in these areas of the brain.”

Aerosolized aluminum, according to Blaylock, is also another substance that passes very easily along the same track and directly into the brain: It bypasses the blood-brain barrier and goes directly into the brain, where it accumulates. In animals, aerosolized aluminum produces lesions or damage in the area of the brain. Mammals, meanwhile, will experience changes in memory, learning and emotions. In people with Alzheimer’s diseases, for instance, the highest concentration of aluminum in the brain is the same entry point, the internal cortex, where the levels continue to accumulate.

Blaylock believes that this alone is compelling evidence that aerosolized aluminum can enter the brain and damage critical areas. The worst part is its size: as a nanoparticle, it easily penetrates the body in ways normal metals cannot. Nano-size aluminum can be used in aerosols that can pass through nasal passages and enter the brain at very high concentrations, thus making it infinitely more toxic.

Aluminum excipients found in vaccines given to children can alter their auditory processing and brain function. While the average person can absorb anywhere from 10 to 100 milligrams (mg) of aluminum every day through deodorants, cookware, baking soda or other environmental sources, normal excretion is done through the urine.

Aluminum is also used in vaccines as an adjuvant, or a component that boosts the immune response to the vaccine. They allow for lesser quantities of the vaccine and fewer doses.

For pregnant women, being exposed to aluminum is especially dangerous as it could easily pass through the placenta and into the developing baby. The developing brain is more sensitive to toxic substances, and nano-sized aluminum particles can cause the brain to develop abnormally and trigger chronic brain inflammation.

Upon examining persons with autism up to the age of 45, it was found that the inflammatory cells in their brains were highly activated, which means that they have been exposed for a long time to toxic substances, thanks to the adjuvants in vaccines.

While neurotoxins are not the only harmful substances found in vaccines, they are cumulative and tend to add up in the brain. They don’t simply “go away.”

Children today are given several vaccines, and many people are unaware of this major increase since the late 1980s. Vaccines are now given in combinations, with 2-month-old babies now administered up to seven vaccines in one go. While medical companies and big pharma industries claim that this is safe, no actual science has ever established this since vaccine makers have been released from liability for vaccine injuries and death in 1986 by the U.S. Congress.

Blaylock noted that what’s in vaccines now are more toxic than before. “This is a full spectrum neurological disease from development and birth all the way to the extremes of age. It’s a very devastating action that these people have initiated,” he said.