Majestic 12, the Secret Space Program, and The Wilson Memo (6)

In particular, Miller had been working with Greer for a very long time, setting up sensitive meetings at the Pentagon.

Notably, Miller is also a proponent of there being no weapons in space, and developed a treaty towards this end. 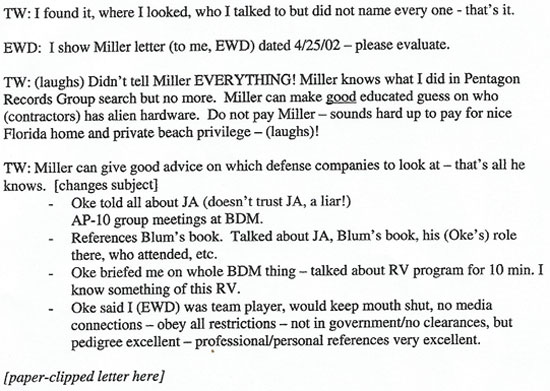 No, JA is not Julian Assange. Please don’t ask. I don’t know who it is, but Assange was not active during 2002. He was literally still in college.

The book referenced is Howard Blum’s Out There. Here’s a quick summary ripped from Amazon:

“Written neither by a zealot nor a rabid debunker but a former New York Times reporter, Out There traces the actions of the Defense Intelligence Agency’s UFO Working Group, charged with the mission to determine whether human life is truly alone in the universe. Triggered by a tip from an American spymaster in 1987 while researching his I Pledge Allegiance … The True Story Of The Walkers: An American Spy Family, this work of journalism uncovers decades of government duplicity regarding its investigations of reported extraterrestrial visits. With 212 interviews and some 200 published sources, author Howard Blum’s earnest reporting is a gripping and credible documentation of his journey from skepticism to belief.”

Next comes a letter from Commander Willard Miller to Davis, which was sent a few months before the above conversation took place between Wilson and Miller: 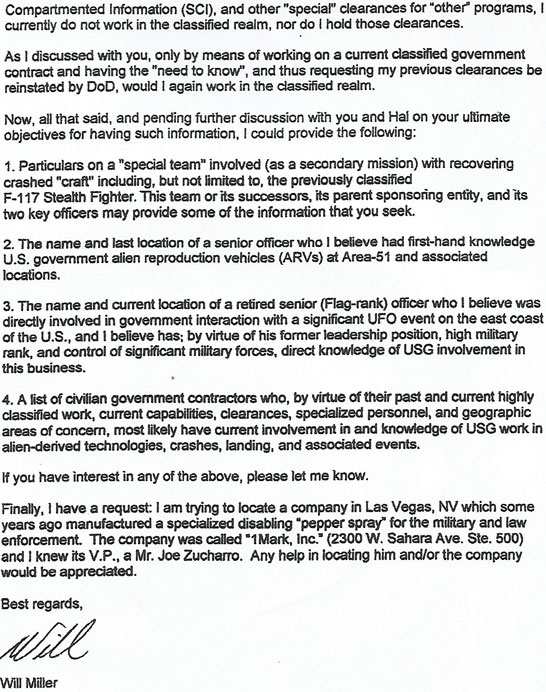 In case it isn’t clear, ARVs are basically UFOs made by man, based on crashed UFOs that have been reverse engineered.

Willard also says he’ll provide Davis the name of someone he believes was involved in this MJ-12/SSP-type program, and a list of contractors involved in dealing with these alien technologies, crashes, landings, etc.

Remember – this is the guy who Wilson said just two pages prior could make educated guesses on which contractors had alien tech.

Davis then switches from this letter from Miller, back to his notes on his conversation with Admiral Wilson. This next part is a bit dense, but get through it, because you’re not gonna wanna miss what’s at the end: 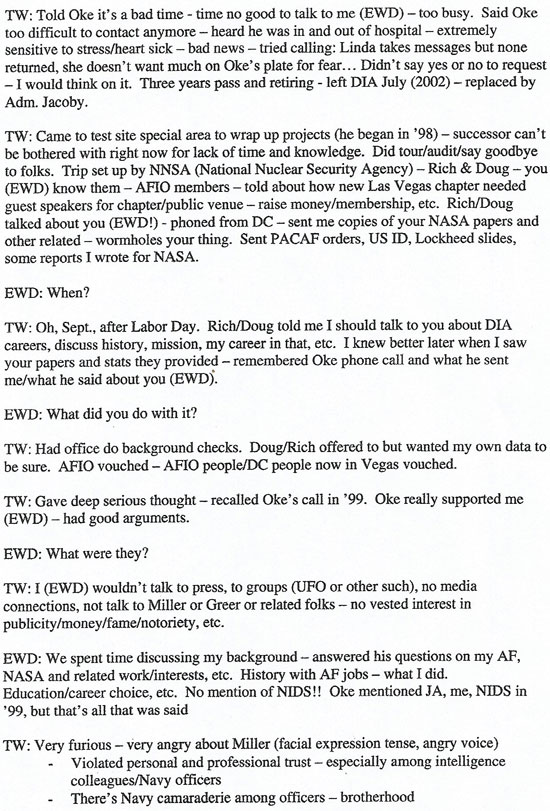 Wilson is nervous about talking to Davis. He’s also angry at Miller, thinking Miller leaked info to UFO researcher Greer, and then stories hit the media, as you’ll see below: 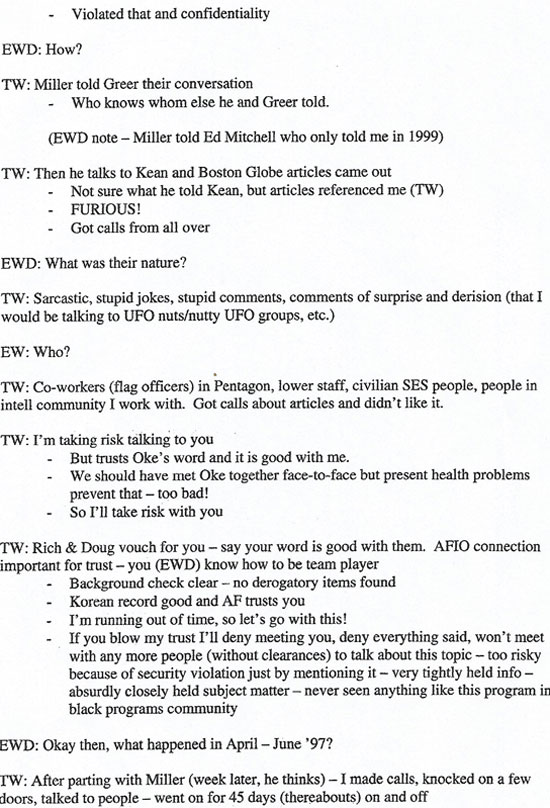 So we now see that this guy Wilson respects (who he calls “Oke”) was the one who recommended he meet with Davis.
Wilson then recounts how he came to discover these black site projects: 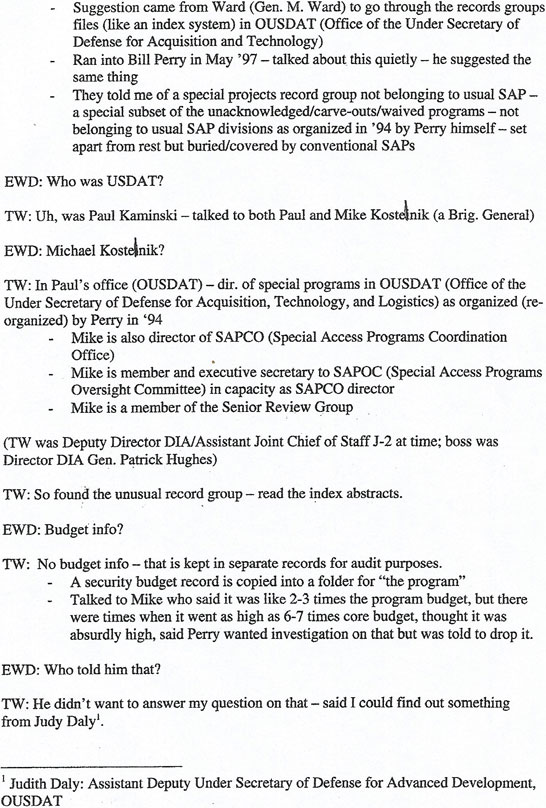 So in case this isn’t clear, these notes are from a Q&A session between Davis and Wilson. Davis is getting the basics down of Wilson’s responses. Here Wilson is trying to track down budgets for various SAPs.
And this particular exchange is very telling: 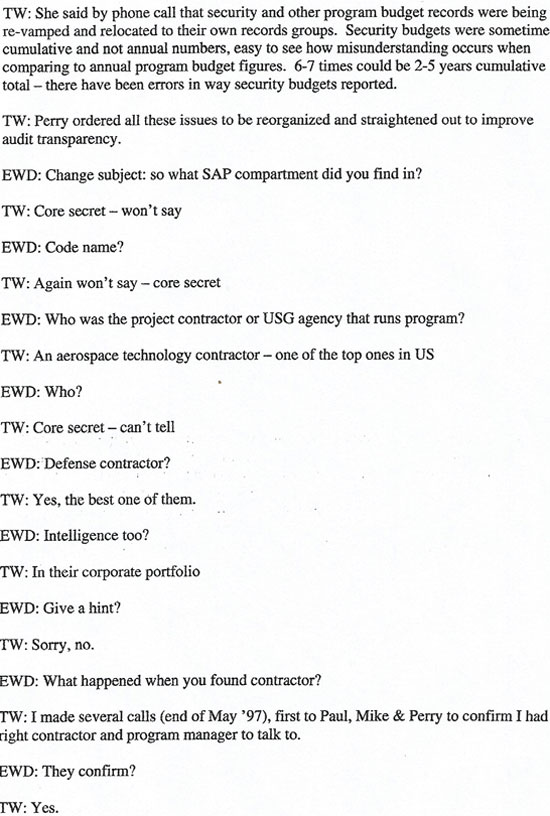 The “best” Aerospace technology contractor that also has Intelligence in their corporate portfolio?
The Intelligence bit makes me think Raytheon…
And now, Wilson pursues his lead, and starts making phone calls: 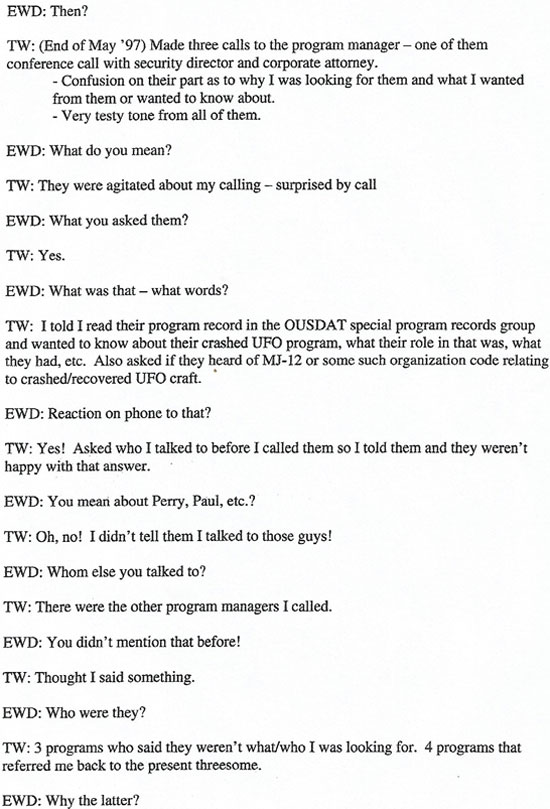 Wilson was encountering buried layers…
He pulled rank on them after getting tired of the run-around: 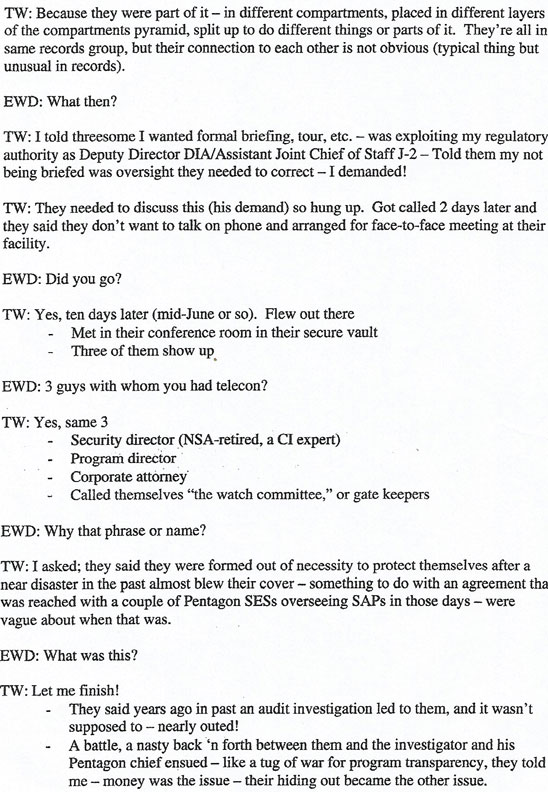 The “Gatekeepers,” huh?
I don’t know about you, but I find this utterly fascinating… 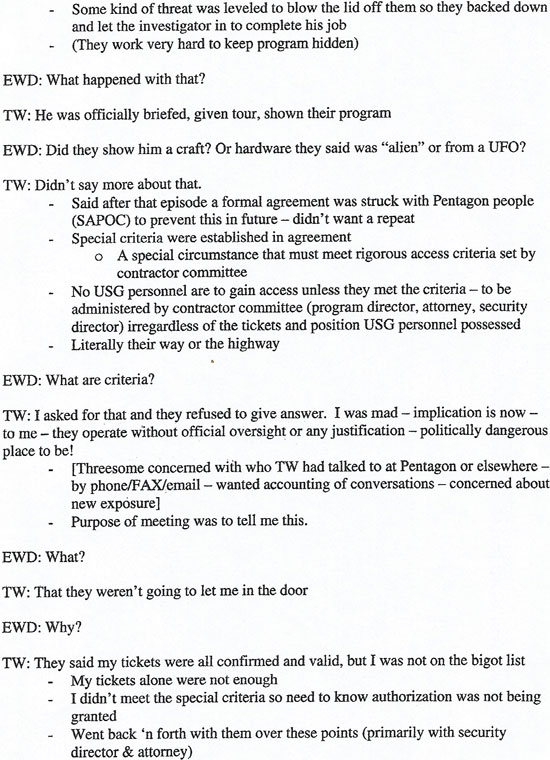 In other words, Wilson’s contacts at this Aerospace/Intel corp stonewalled him, despite his rank and clearance and authority.

Now get a load of the interaction Wilson has with a Program Manager there, when he’s trying to nail down exactly what this SAP entails: 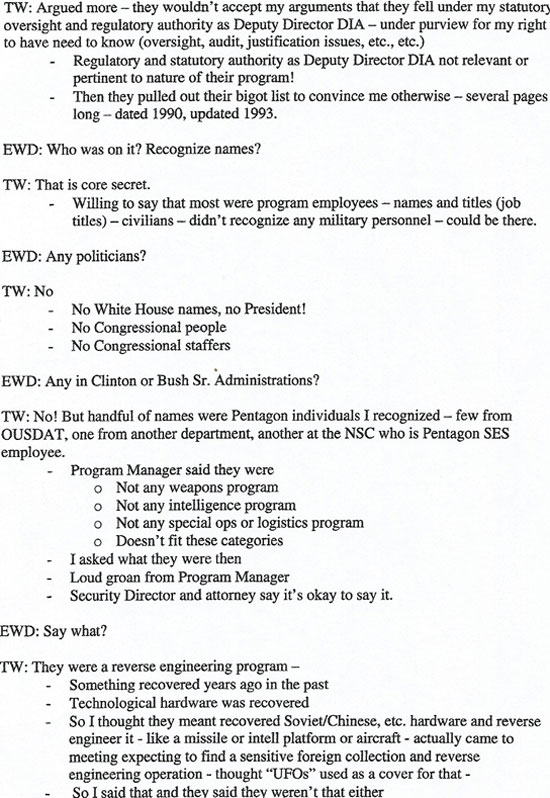 Here’s where it gets really wild – but also fits with things like Bob Lazar’s story: 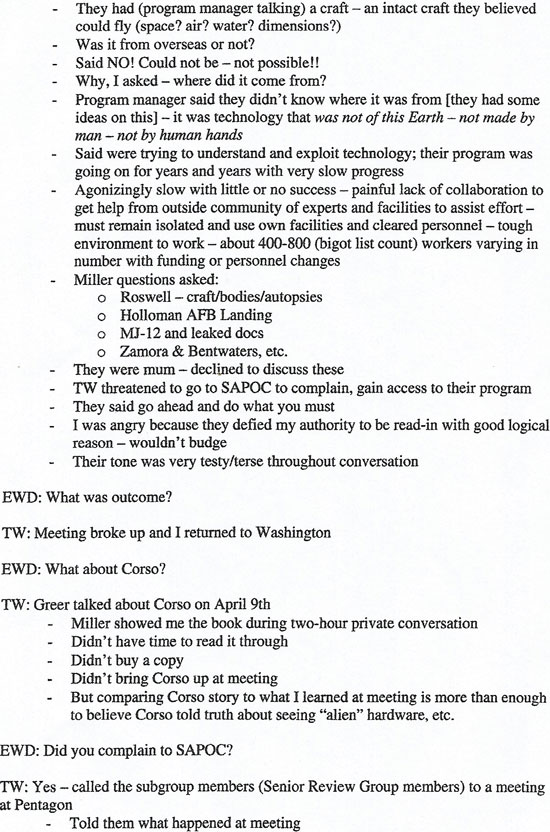 In the words of many an Anon – big if true.

And for the record, Corso is a reference to the book The Day After Roswell by Philip Corso. Corso was a Lt. Col. in the Army and served in Army Intelligence. He claimed to have helped with the recovery of alien tech from the Roswell crash site, under the supervision of Roscoe Hillenkoetter, first director of the CIA.

“According to Corso, the reverse engineering of these artifacts indirectly led to the development of accelerated particle beam devices, fiber optics, lasers, integrated circuit chips and Kevlar material.

In the book, Corso claims the Strategic Defense Initiative (SDI), or “Star Wars”, was meant to achieve the destructive capacity of electronic guidance systems in incoming enemy warheads, as well as the disabling of enemy spacecraft, including those of extraterrestrial origin.” 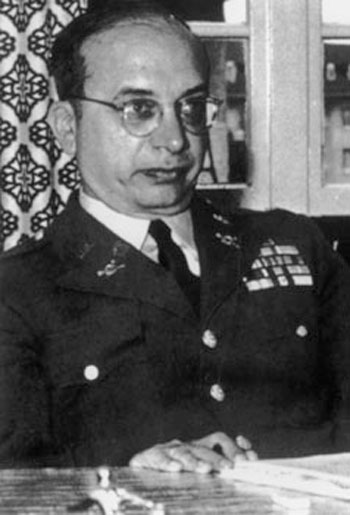 Corso would die a year after going on Art Bell’s Coast to Coast radio show of a heart attack.

But at this point, Williams was becoming a thorn in this contractors side, so they complained and basically got his superiors to threaten him with demotions and such: 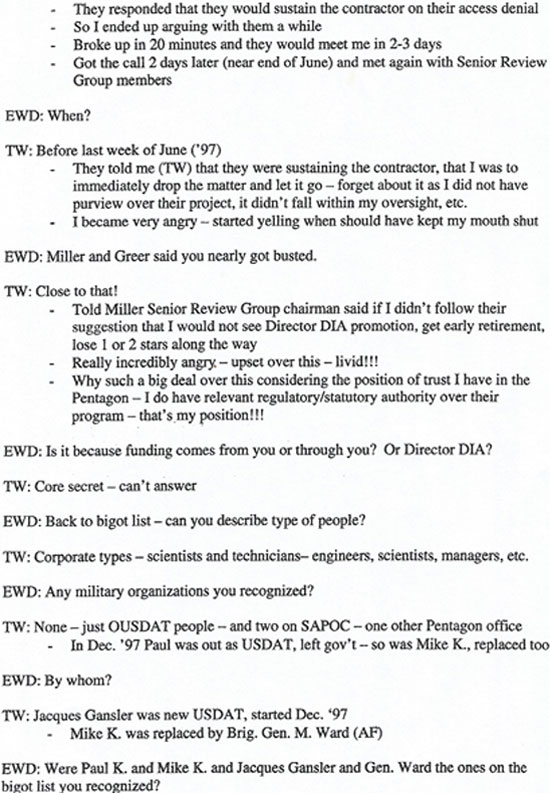 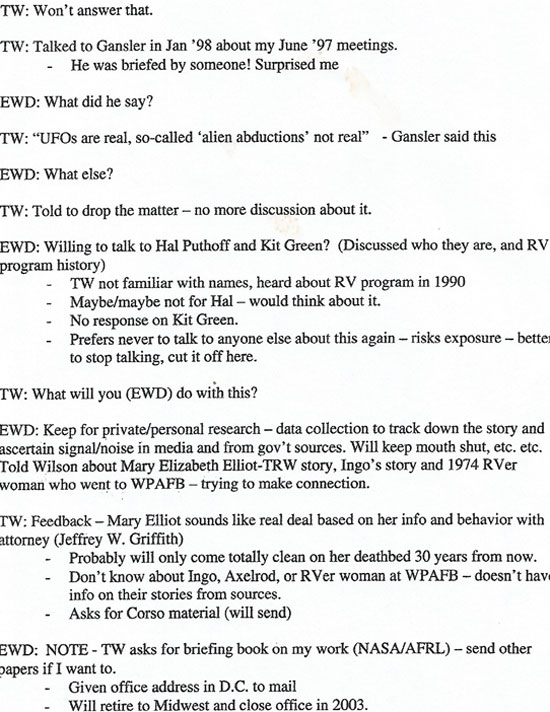 I’m not sure there are any easy answers here. At best, I think we have both genuine information and lots of disinformation in the mix. It’s very hard to tell who the good guys are, and who the bad guys are. I don’t have clear cut answers for you. I have a sprawling web of information I can try to condense and make somewhat more approachable, but when it comes to solid answers, well… I’ll defer to QAnon on the matter.

And while many will want to dismiss this topic out-of-hand, I advise than none do that so hastily. The universe is full of things we don’t understand, and while this is quite the daunting rabbit-hole, it’s important to remember to take this all…

One step at a time. 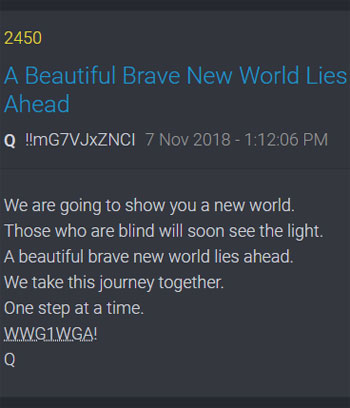