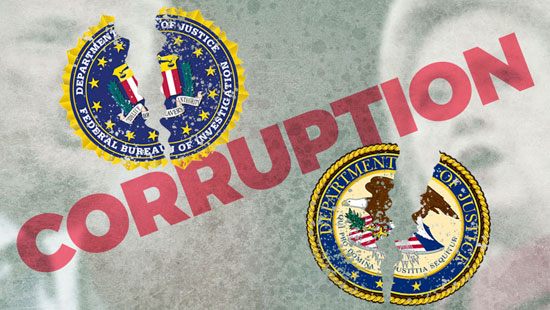 “FISA Memo” Crimes Demand the Immediate Dismantling of the FBI

Before the Clintons, of course, there was the Bush Crime Syndicate. The Bush’s Cocaine smuggling operation at Arkansas’ Mena Airport (while Clinton was governor) as well as the Savings and Loan scandal under President George H.W. Bush (his son Neil was sued by the Federal Deposit Insurance Corporation) are just two examples of the deeply entrenched criminality at the highest echelons of American government.

Back to Operation Gladio C

America has some extremely serious problems concerning Operation Gladio C.
It’s very important to point out that no other nation on Earth is so challenged by mass shootings the way the USA is. Just why is that? Really, why is it plagued by so many school massacres?! There’s not a week that goes by that there is not a shooting in a school somewhere in America. When compared to all the other countries, the only reasonable deduction is that the great majority of these shootings are engineered by those who seek to irreparably tear the fabric of American society. And so they have.

While it’s impossible to state with certainty, there’s a great likelihood that Nikolas Cruz (author of Florida shooting) was the product of the CIA’s MK-Ultra mind control program. Everything about his life and behavior smacks of the perfect candidate to be first victimized and then used by the shrinks who are routinely contracted by the C.I.A. to implement their infamous mind-altering program.

While most of the evidence is circumstantial, it is quite compelling.

1. Victims are frequently selected because they come from broken families. Not only was he an adopted child, Cruz’s mother and father had both passed away. He took the loss of his mother particularly hard, as adopted children often do because of abandonment issues. Lynda Cruz died of pneumonia on November 1, 2017 and Nikolas was depressed according to those who knew him. Therefore, it’s very significant that this crime was committed soon after her death. What really happened to Nikolas between November 1, 2017 and February 14, 2018?
“Mr. Cruz and his brother, Zachary, had been adopted, and were raised largely by their mother, Lynda Cruz, especially after their father, Roger P. Cruz, died suddenly in 2004 at the age of 67. Ms. Cruz died in November, and people who knew Nikolas said he had taken the loss hard.”

2. According to press reports, Cruz’s had been diagnosed with ADHD and Autism and had been on medication. The pharmaceutical drugs that are usually prescribed are powerful psychotropic which can have dangerously adverse side effect. Such drug regimens can also be used as a part of a concealed mind-control program administered by his “health professional” handler.

3. Cruz was expelled from his high school and was told not to bring his backpack on the premises. As a “troubled student” and despondent teenager, it truly appears that he was deliberately broken by the system in order to make him vulnerable to an MK-Ultra mind-control program. Everything was being stacked against him so that he would snap exactly when his handlers wanted him to, which he apparently did.

4. Perhaps the real clincher in this case is the lack of response on the part of the FBI after receiving credible threats about Cruz’s highly suspicious behavior. Locally, there was also an extremely negligent response by various school and local law enforcement authorities to Cruz’s conduct. It’s as though he was being systematically set up to participate [UNWITTINGLY] in a massacre. In other words, if he really was one of the shooters, Nikolas Cruz may not even know what he did because of the psychoactive drugs and mind manipulation techniques used on him.

5. It is always suspect whenever fellow students and other acquaintances are trotted onto MSM evening news platforms who provide testimony that fits the preconceived narrative too perfectly. The immediate and full-throated news reports painted a picture so fast about the suspect that much of the information must have already been in their possession. How did that happen? It’s kind of like another Operation Gladio C terror event known as 9/11, when the free-fall collapse of Building no. 7 took place after the BBC newscast that reported it!

6. Then there is Cruz’s expressed interest in guns and killing animals which is not uncommon among boys his age. It’s very much a teenage thing (especially in such a violent American society) that has been conveniently magnified by the MSM to make him out to be a crazed killer, which he may or may not be. However, his most recent caretakers were quite clear that he never demonstrated such an incriminating tendency.
“They also saw no signs of animal cruelty. They are animal lovers, with two dogs and six cats. He’d have been kicked out if he was mean to their animals. Cruz seemed to love their pets.”

7. There have been way too many accounts given by other students who witnessed the event from inside the school who spoke of multiple shooters. This fact alone ought to stop everybody dead in their tracks. This often happens with black operations. The initial news reports capture much truth but are then completely disregarded during the investigation. Why have the investigators already ignored these multiple shooter testimonies, as the MSM news updates fully indicated. This right here is a hallmark of these black ops and huge red flag waving: Operation Gladio C.


8. That there were “Code Red active shooter drills” (see the orange highlight in the screenshot below) conveniently conducted on site at the Marjory Stoneman Douglas High School in Parkland, Florida only adds to the likelihood of this mass shooting being a carefully scripted mass casualty event (MCE). Why are nearly all of these false flag shootings preceded by drills? This coincidence is simply far too frequent not to be an integral part of these pre-planned psyops. 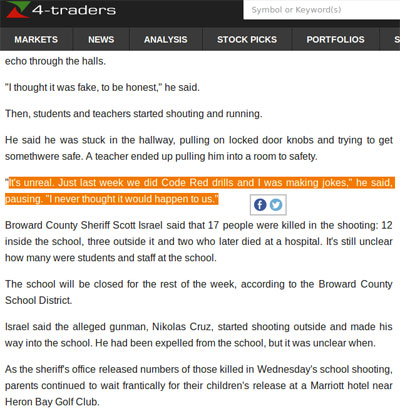 The best way to solve this crime mystery is to interview those who had the most interaction and meaningful contact with the suspect. That would be, first and foremost, his attending psychiatrist and/or clinical psychologist. Next would be the couple who took him into their home – James and Kimberly Snead. This is where the investigative trail begins, which will ultimately lead to the Operation Gladio C decision-makers.

Immediate and overwhelming reaction by the Democrats

The reaction by Democratic politicos at every level, liberal MSM talking heads, progressive ringleaders throughout urban America, as well as left-wing hate groups and other Soros-funded NGOs to this particular MCE is like no other. It’s as though a chorus of protest demanding new gun control laws was orchestrated for months in advance to be sung in unison across the land.

This unusually coordinated reaction alone is enough to arouse deep suspicions that these collaborators were all put on notice about the MCE. Given that their stated goal is to remove the Second Amendment, they are actually co-conspirators guilty of the highest form of treason. After all, the NWO globalist cabal would have a field day once gun rights were abolished. The American Republic would be transformed into a tyranny overnight.

Let’s be clear, the rampage across America by gun-hating liberals has been so fierce and so unrelenting since the Florida shooting that their reaction alone ought to be a dead giveaway. This tragic massacre was engineered so that they could hijack the MCE and use it to, at the very least, take the assault weapons off the streets. The odds are quite astronomical that almost every one of these mass shootings was committed by an AR-15 (not by the shooter). In the present case, it was an “AR-15-style semiautomatic rifle” that Cruz allegedly used.

And the Mockingbird Media’s premier organ of propaganda – The New York Times – is always here to remind us of this “AR-15” common denominator among so many mass shootings over the years (see the following excerpt). As if on cue, the NYT editorial page writers will then follow up with so many screeds against assault weapons even though it was the feds who planted the AR-15 in the first place.

“Newtown. San Bernardino. Las Vegas. Sutherland Springs. And now, Parkland. Five of the six deadliest mass shootings of the past six years in the United States. In each of them, the gunman had an AR-15-style semiautomatic rifle.” (The New York Times article In Florida, an AR-15 Is Easier to Buy Than a Handgun).

The best rebuttal thus far to the NYT’s familiar gun-grabbing fanaticism is Trey Gowdy’s recent admonition: “Show me a law that will prevent the next mass killing” in this video.

It’s no quirk of fate that the Marjory Stoneman Douglas High School is where this brazen psyop and black operation was carried out by the Operation Gladio C perpetrators. The non-Floridian, Marjory Stoneman Douglas was the state’s first “declared” feminist, fiercest environmentalist and one of the original “social justice warriors” when they really did good work. Most significantly, Stoneman Douglas was known as the advocate who saved Everglades National Park, sometimes known as The Swamp. She protected the massive swamp from being drained by the developers who were determined to build there. Are we to believe that this particular high school’s namesake was not quite intentionally chosen for political purposes?!

Parkland, Florida is also located in ultra-liberal Broward County, where the blue runs as deep as anywhere in the Deep South. The critical point here is that the agents of the Very Deep State execute these black ops with explicit purpose and multiple goals. Every detail is nailed down for maximum effect. The occult symbolism is especially chosen to send a message to all who are aware. Often times these are subliminal messages which will reach a much greater [socially engineered] audience. That can then be deliberately triggered at the appointed time. Do you now see how the Florida psyop was a fastidiously designed scheme by those who run Operation Gladio C?

The American Republic is under dire threat. The US citizenry is facing challenges that are so daunting and formidable they must be confronted sooner than later. The POTUS himself now finds himself between a rock and hard place with no wiggle room. In fact Trump has only one response to the ongoing soft coup being run by rogue elements within the U.S. intelligence community – a military response!

The barrage of assaults by the Very Deep State via Operation Gladio C are now occurring so fast and furiously, they must be addressed in a decisive manner. Not to do so will seal the fate of the American constitutional republic. Is there any US patriot who does not yet agree that Deep State’s seditious lawlessness demands immediate and vigorous prosecution?

Therefore, the time has come for the Department of Justice to step up to the plate. President Trump must “drain the swamp” as he committed to do. He can start with shutting down the FBI. Because Operation Gladio C is fundamentally a covert military operation, the U.S. Armed Forces will be compelled to form the military tribunals necessary to administer the Uniform Code of Military Justice. Then, as Commander-in-Chief, the president can lock up the perpetrators at Guantanamo Bay detention camp.

Flu vaccines are an IQ test… a deadly one (II)