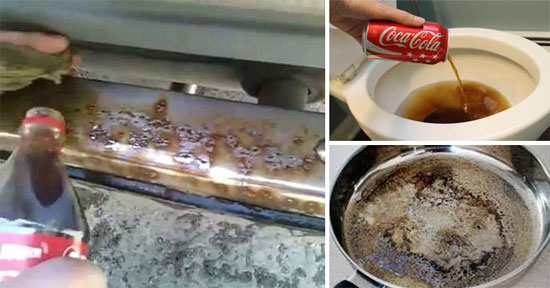 Coke is the most valuable brand in history, and “Coca-Cola” is the world’s second-most recognized word after “Hello”. However, the beverage itself is an absolute poison to the human metabolism. Coke is very close to the acidity level of battery acid and, consequently, it can clean surfaces equivalent to and often better than many toxic household cleaners.

It’s cheaper and easier to buy Coke in some third world countries than it is to access clean water. Coke uses “public relations propaganda” to convince consumers and entire nations that it is an “environmental company” when really it is linked to pollution, water shortages, and disease.

People who consume soft drinks such as Coke have a 48% increase in heart attack and stroke risk, compared to people who did not drink the sodas at all or did not drink them every day. A study published in the journal Respirology reveals that soft drink consumption is also associated with lung and breathing disorders including asthma and chronic obstructive pulmonary disease (COPD).

The carbonation in Coke causes calcium loss in the bones through a 3-stage process:
1. The carbonation irritates the stomach.
2. The stomach “cures” the irritation the only way it knows how. It adds the only antacid at its disposal: calcium. It gets this from the blood.
3. The blood, now low on calcium, replenishes its supply from the bones. If it did not do this, muscular and brain function would be severely impaired.

But, the story doesn’t end there. Another problem with most Coke is that it also contains phosphoric acid (not the same as the carbonation, which is carbon dioxide mixed with the water). Phosphoric acid also causes a draw-down on the body’s store of calcium.

Esophageal cancer was very rare two generations ago – now, it’s common. The basic mechanism works as follows:
1. Mechanical damage to cells is a huge risk factor for cancer. It’s why asbestos particles, for example, cause lung cancer.
2. All soft drinks cause acid reflux (stomach acid rising up past the esophageal valve). This is more pronounced when the body is horizontal (as in sleeping), but the sheer volume of Coke and soft drinks consumed in the USA means the acid reflux is well past the danger point. Any time you ingest a gassy drink, you are going to get belching – and acid into the esophagus. How much is too much? The research doesn’t say where the limit is – it only shows that most of us are far, far, far past it.
3. Stomach acid dissolves tissue – that’s its purpose. The stomach lining does not extend into the esophagus, so the lower esophagus gets damaged by acid far more frequently in soft drink users than in non-soft drink users. This results in a radical increase in cell mutations, along with a far higher level of free radicals.

Coke acts as an acidic cleaner. The amount of acid in soda is enough to wear away at the enamel of your teeth, making them more susceptible to decay. In tests done on the acidity levels of soda, certain ones were found to have pH levels as low as 2.5. To put that into perspective, consider that battery acid has a pH of 1 and pure water has a pH of 7.

To prove Coke does not belong in the human body, here are 20 practical ways you can use Coke as a domestic cleaner:

1. Removes grease stains from clothing and fabric;
2. Removes rust; methods include using fabric dipped in Coke, a sponge or even aluminum foil. Also loosens rusty bolts;
3. Removes blood stains from clothing and fabric;
4. Cleans oil stains from a garage floor: let the stain soak, hose off;
5. Kills slugs and snails: the acids kills them;
6. Cleans burnt pans: let the pan soak in the Coke, then rinse;
7. Descales a kettle (same method as with burnt pans);
8. Cleans car battery terminals by pouring a small amount of Coke over each one;
9. Cleans your engine: Coke distributors have been using this technique for decades;
10. Makes pennies shine: soaking old pennies in Coke will remove the tarnish;
11. Cleans tile grout: pour onto kitchen floor, leave for a few minutes, wipe up;
12. Dissolves a tooth: use a sealed container… takes a while but it does work;
13. Removes gum from hair: dip into a small bowl of Coke, leave a few minutes. Gum will wipe off;
14. Removes stains from vitreous china;
15. Got a dirty pool? Adding two 2-liter bottles of Coke clears up rust;
16. You can remove (or fade) dye from hair by pouring diet Coke over it;
17. Remove marker stains from carpet. Applying Coke, scrubbing and then clean with soapy water will remove marker stains;
18. Cleans a toilet: pour around bowl, leave for a while, flush clean;
19. Coke and aluminum foil will bring Chrome to a high shine;
20. Strips paint off metal furniture. Soak a towel in Coke and lay it on the paint surface;

Now can you imagine what is does to your stomach lining?
Furthermore, have you ever wondered what exactly Coca Cola is?

Here is what happens in your body after drinking Coke:
After 10 minutes: The sugar contained in a glass of Cola can cause a devastating “strike” on the body. The cause being the phosphoric acid which inhibits the action of sugar.
After 20 minutes: A leap in insulin levels in bloodstream occurs.
After 40 minutes: Ingestion of caffeine is finally completed. The eye’s pupils are expanding. Blood pressure rises because the liver disposes more sugar into the bloodstream. The adenosine receptors become blocked thereby preventing drowsiness.
After 45 minutes: The body raises production of the dopamine hormone, which stimulates the brain pleasure center. Similar to the reaction Heroin creates.
After 1 hour: Phosphoric acid binds calcium, magnesium and zinc in the gastrointestinal tract, which supercharges metabolism. The release of calcium through urine takes place.
After more than 1 hour: Diuretic effects of the drink begin. The calcium, magnesium, and zinc (which are part of our bones) are removed out of the body, as well as sodium. At this time, we can become irritable or subdued. The whole quantity of water, contained in a coca cola, is removed through urination. 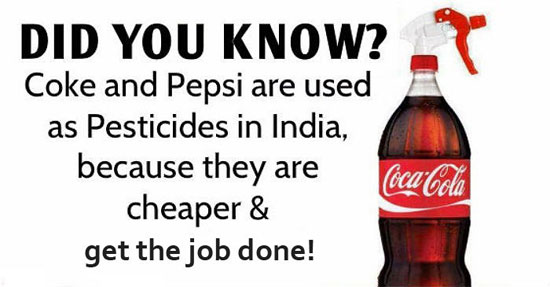 When having a cold bottle of Coke and enjoying its undeniable freshness are we aware of what chemical “cocktail” we are putting into our bodies? The active ingredient in Coca-Cola is orthophosphoric acid. Due to its high acidity, cisterns used for transporting the chemical have to be equipped with special reservoirs designed for highly corrosive materials.

Aqua Carbonated – this is sparkling water. It stirs gastric secretion, increases the acidity of the gastric juice and provokes flatulency. Filtered tap water is what is primarily used.

E150D – this is food coloring obtained through the processing of sugar at specified temperatures, with or without addition of chemical reagents. In the case of Coca-Cola, ammonium sulfate is added.

E952 – Sodium Cyclamate is a sugar substitute. Cyclamate is a synthetic chemical, has a sweet taste, which is 200 times sweeter than sugar, and is used as an artificial sweetener. In 1969 it was banned by FDA, since it, as well as saccharin and aspartame, caused cancer in rats (but later the ban was lifted).

E950 – Acesulfame Potassium. 200 times sweeter than sugar, containing methyl-ether. It aggravates the operation of the cardiovascular system. Likewise, it contains asparaginic acid which can also cause an excitant effect on our nervous system and in time it can lead to addiction. Acesulfame is badly dissolved and is not recommended for use by children and pregnant women.

E951 – Aspartame. A sugar substitute for diabetics that is chemically unstable: at elevated temperatures it breaks down into methanol and phenylalanine. Methanol is very dangerous as only 5-10ml can cause destruction of the optic nerve and irreversible blindness. In warm soft drinks, aspartame transforms into formaldehyde which is a very strong carcinogen. Symptoms of aspartame poisoning include: unconsciousness, headaches, fatigue, dizziness, nausea, palpitation, weight gain, irritability, anxiety, memory loss, blurry vision, fainting, joint pains, depression, infertility, hearing loss and more. Aspartame can also provoke the following diseases: brain tumors, MS (Multiple Sclerosis), epilepsy, Graves’ disease, chronic fatigue, Alzheimer’s, diabetes, mental deficiency and tuberculosis. Later, this substance was initially illegal due to its dangers but was again made legal in a suspicious manner.

E338 – Orthophosphoric Acid. This can cause irritation of the skin and eyes. It is used for production of phosphoric acid salts of ammonia, sodium, calcium, aluminum and also in organic synthesis for the production of charcoal and film tapes. It is also used in the production of refractory materials, ceramics, glass, fertilizers, synthetic detergents, medicine, metalworking, as well as in the textile and oil industries. It is known that orthophosphoric acid interferes with the absorption of calcium and iron into the body which can cause weakening of bones and osteoporosis. Other side effects are thirst and skin rashes.

E330 – Citric Acid. It is widely used in pharmaceutical and food industries. Salts of citric acid (citrates) are used in the food industry as acids, preservatives, stabilizers, and in the medical fields – for preserving blood.

E211 – Sodium Benzoate. It is used in production of some food products for anti-bacterial and anti-fungal purposes. It is often found in jams, fruit juices and fruit yogurts. It’s not recommended for use by asthmatics and people who are sensitive to aspirin. A study conducted by Peter Piper at the Sheffield University in Britain, found that this compound causes significant damage to DNA. According to Peter, sodium benzoate which is an active component in preservatives, doesn’t destroy DNA, but deactivates it. This can lead to cirrhosis and degenerative diseases like Parkinson’s disease.

Coca-Cola is undeniably a very useful product. The key is to use it for purposes that do not include drinking! Here is a video about Coca-Cola!

ADDICTED TO SWEETS? Sugar can be just as addicting as alcohol, nicotine or opiates –…