An experience and/or sensation that people are having in greater frequency recently is that of being in a ‘different reality’ from other people. Someone can be standing right next to another person and yet it feels like both are living in a completely different reality. Is this a new human condition – the ‘split-reality syndrome’? And if so, what are the principal aspects of these different realities? 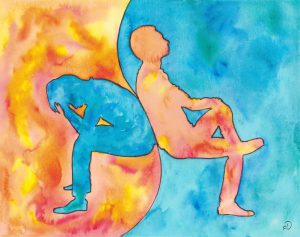 On the one hand, there is little doubt that humanity – yes, that means human life upon this planet – is experiencing monumental shifts and disturbances that include such aspects as: earth changes / disruptions, non-linear climatic variations, economic vulnerabilities and fluctuations, national political system failures, geo-political fractures, infrastructure breakdowns, global power grabs, conscience programming, technocratic control systems, and much more. And on the other hand, we are witnessing an immense shift in peoples’ awareness, understanding, and perceptual clarity. So, since we are in the domain of discussing ‘big shifts’ – and this is a time for experiencing large themes – let us bring forward two ‘big words’ to frame this: Apocalypse and Armageddon.

These two words have, in recent times, been coming up repeatedly in spoken and written narratives and conversations. And often, they have been used interchangeably. And the reason for this is that on a very general level, both terms are used to refer to an ‘end times’ destructive event. Both terms, in this broad context, describe an end time, or end of the world, scenario. And with the current state of the world as it today, and its potential future trajectory, it is understandable that people are using these terms in conversation. Yet, they each represent a different aspect of this ‘split-reality.’ So, the article will lay out what these terms represent and how they play into a different reality scenario for each.

The term ‘apocalypse’ comes from ancient Greek (ἀποκάλυψις – apokálypsis) which literally means ‘from cover’, that is a disclosure or revelation of great knowledge. In religious terminology it has been used to denote a disclosure of something very important that was hidden. This may refer to some ‘heavenly secrets,’ or similar divine disclosures that may bring understanding onto earthly life. Here then, we have a term representing a ‘revelation of the veiled.’ In such an instance of an apocalypse, we have a moment of personal and/or collective revelation of some hidden or veiled knowledge. Does this match with the term ‘Armageddon’?

‘Armageddon’, in ancient Greek is Ἁρμαγεδών, Harmagedōn (and in Hebrew isֹ‎ Har Məgīddō) which is the prophesied location of a battle during the ‘end times.’ Again, the term ‘Armageddon’ is used in a general sense to refer to any ‘end of the world’ scenario. Yet it has no revelatory significance or suggests any epiphany. It refers to a physical battle, a time of great end times war – the ‘war to end all wars.’

As we can see, these two terms represent two distinct moments: one is an instance of revelation (apocalypse), and the other is a specific physical ‘war to end all wars’ (Armageddon).

How people use these terms (if they do at all), and also the presence of these terms in the same narrative, signifies this ‘split-reality’ positioning. In other words, a person can position themselves within a reality of revelation, a time when hitherto hidden knowledge and understandings are revealed to them – a perceptual awakening. Or, a person can perceive themselves to be caught up with a time of physical warfare, disruption, and destruction. One of these realities allows for a refinement of self-awareness, cognition, and comprehension; the other, a densification, entanglement, and potential disturbance of one’s cognition and energy state.

Furthermore, the apocalypse mode (to call it that) represents a movement towards something. A person, through revelation, is transitioning toward a perceptual awareness, or space of knowing. And the Armageddon mode is more likely to suggest a running away from something – running away from the destruction and devastation of war.

Here, these positionings can also be applied to how people are reacting to one or other of possible future ‘reality states.’ In these days we are being told to ‘prepare for what is coming.’ Yet what is coming? How can we really know what is going to come – World War 3 or Evacuation Plan Planet Earth by Pleiadeans?

It is most likely that we shall meet exactly what we are preparing for. We tend to meet reality halfway (most of the time!). So, in this scenario, if we are stockpiling food, digging our bunkers, and fearing for the worst – the ‘Armageddon-pathogen-virus-zombie-endgame’ – then we’re more likely to run into one of those demonic zombies, or an experience affiliated with this energy. A person is more likely to experience fear, confusion, anxiety, uncertainty, etc, if this is what they are preparing against. Because this structure has become their reality set. Reality has a funny way of responding to what’s in our heads – yet most often in a way that we were not expecting. What we are running away from usually meets us head on, at some point. Just like in our abstract dreams: we are running away from some fear but going nowhere.

The apocalypse-revelation mode, on the other hand, suggests a position of receptibility and openness to unknown potentials, without fear or apprehension, yet with an inner sense of trust. For you see, we cannot run away from ourselves no matter how fast or how hard we pursue. We can take ourselves to an underground bunker, or to some isolated island – yet we take ourselves with us. And ‘how’ we are is what determines how we experience what is to be and what is to come.

To return to what was said in the opening sentence, we can be standing right next to another person and yet each person is experiencing and living in a different reality – and responding to this accordingly. We can be physically next to them, but we are certainly not with them.

Whether we have recognized it, and acknowledged it, or not – reality has split. And it is time to choose our positions. How we take ourselves forward from this moment on will determine what form and arrangement of life, as well as energetic and emotional states, we are going to experience.

Not everyone will be a part of our reality – yet many will. We cannot include all people in our reality, for this will be a personal choice to make, just as you will, or have already, made yours. Reality is about alignment. Our experiences have a way of meeting us halfway, or someway, in alignment with our state of being. It might not all be rosy. Discomfort is also a hereditary aspect of transformation and transition. In whichever way the future unfolds, and no one can say for sure on this, it will be a question of how you choose to meet it. And that will depend upon which reality you have stepped into.

Is your future going to be a revelation of hidden truths leading to new understandings and life patterns; or are you battle-ready for the war to end all wars? If you’re not yet sure, then take a little time to think about it. But not too much time; but do think long and hard. It’s going to be a critical choice.