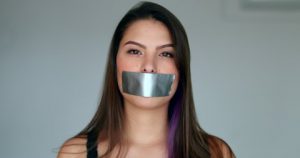 The survey looked at the political leanings of 137,456 full-time, first-year students at 184 colleges and universities across the country. It identified “the largest-ever gender gap in terms of political leanings: 41.1 percent of women, an all-time high, identified themselves as liberal or far left, compared to 28.9 percent of men.”

Every year since 1966, the institute has been conducting these incoming freshmen surveys to see how the country’s demographics lean politically. Now more than ever, women are pushing and supporting the far-left ideologies and policies that are plunging the country into censorship and totalitarianism.

Back when liberalism did not encompass the rampant filth and debauchery that it does today, more men leaned left than women. Around the 1980s when leftism really started to mutate into something more extreme, that balance began to shift.

“While liberal and left identification among female students reached a high in 2016, male students remained far below their 1971 high, which was 44 percent,” reported The New York Times.

Will society survive the feminist onslaught?

A similar survey from the Knight Foundation that was conducted in 2017 asked 3,014 college students the question: “If you had to choose, which do you think is more important, a diverse and inclusive society or protecting free speech rights?”

As for voters in general, the Pew Research Center procured data showing that most Democrats today are female, while most Republicans are male. The combined gender gap is 18 points, again suggesting that women are more likely than men to want to conform society into the leftist image.

Another demographic that leans strongly left is dead people, as well as illegal aliens, the latter of which is why the Biden regime made it a top priority immediately after the geezer was installed to flood the country with millions more “migrants.” “Significant gender differences in party identification have been evident since the early 1980s,” says the Rutgers Center for American Women and Politics about the shifting demographic trends in voting.

A 2018 paper on the subject claims that women are more likely to vote liberal because they “prefer more peaceful options.” One wonders if Antifa rioting counts as peaceful?

Women apparently vote left because they “are less apt to approve of the use of force and the striking of hard bargains internationally, and more apt to approve of substantial concessions to preserve peace,” the paper added, against suggesting that all of this is true of Democrats.

Ever since the neocons (neoconservatives) took over the Republican Party, it has leaned more in the direction of starting and continuing wars whenever the opportunity arises. However, today’s Democrats are really no different.

It is just that the media skews all this and ultimately deceives people into voting based on some false perception of reality rather than actual reality. Voting left or right, truth be told, often leads to the same disastrous outcomes.