Decades ago, cyberattacks seemed to be more of a futuristic problem that was promoted in movies rather than something to be concerned about in everyday life. Movies like The Terminator, in which an A.I. system becomes self-aware and attempts to exterminate human life, or Wargames where a young kid thinking he’s playing a computer game unknowingly almost starts World War 3 by attempting to launch nuclear missiles. 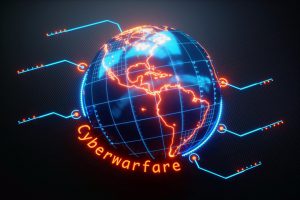 Cyberattacks are no longer just fictitious storylines to watch on the big screen. One only needs to look to world news to see that they are being used more frequently.

• Just last year Hector Xavier Monsegur, co-founder of the hacking group LulzSec, was interviewed by FOX News and said that cyber attacks against the U.S. will get “exponentially worse and worse.”

• Early in February of 2022, European oil facilities were affected by cyberattacks. The I.T. networks at dozens of oil storage terminals went down.

• In February 2022, the largest cyberattack in Ukraine’s history occurred, blocking access to banks and defense agencies.

• In 2019, a report by govtech.com discussed the rise of cyberattacks on US-based utility companies when more than a dozen utility companies had been targeted within the year. The report stated, “The U.S. government has been warned the U.S. electricity grid is an inviting target for overseas hackers. National security officials have identified Russia and China as having the ability to temporarily disrupt the operations of electric utilities and gas pipelines.”

• According to securityintelligence.com, “In May 2021, Colonial Pipeline, one of the largest fuel pipelines in the United States, faced a ransomware attack. The company, which transports more than 100 million gallons of gasoline and other fuel daily from Houston to New York Harbor, shut down work for several days.”

As technology progresses, we continue to make amazing advancements.

These advancements are in all fields, and as a whole, they lead to our way of life becoming both more convenient and easier.

Almost every aspect of our lives is driven by our connection with technology. It is inescapable. We have one-click shopping, next day delivery, instant connections to someone on the other side of the world, apps on our phones that can control household appliances as well as home security, automated machines, and chemical delivery systems in factories, hospitals, water treatment plants, utility companies, and a library of information that is available at our fingertips twenty-four hours a day.

All this progress, convenience, and connectivity don’t come without their pitfalls. The downside of all this technology is our dependency on it and how easily it can be manipulated and affected by external forces. Also, people have forgotten certain life skills, and the rise of instant gratification has left people with the inability to go without.

Cyberattacks can also change how warfare looks. For most people, the image of war is one where bombs or rockets are raining down on a target, or where armored vehicles and soldiers are sweeping through a city. This is certainly one side to warfare, but with cyberattacks, it can take on a different appearance.

Before there are boots on the ground, a cyber attack has the potential to disrupt many areas of a country’s infrastructure.

Areas that could be affected include but are not limited to:

Most of the above examples would be considered critical for a country to function. Disrupting or shutting down just a few of them, even for a relatively short period of time, can greatly upset the balance within a country. This not only can have huge financial implications, but it can also pose risks and dangers to health and safety.

Much of the world’s population is subject to the effects of cyberattacks, whether directly or indirectly

We depend on technology for almost everything, and we will continue to depend on it unless some reset event sends us back several hundred years. Technology is here to stay, and sadly, so are nations at war and those who hold grudges against institutions, companies, and governments, but who have the technological know-how to disrupt their systems.

Therefore, it would seem that cyberattacks are also here to stay. To what end they are used is anyone’s guess. Will they be carried out with pinpoint accuracy to accomplish small-scale missions, or will their effects be felt by millions, or, perhaps billions of people?

Only time will tell.