Lifesitenews is reporting that renowned toxicologist Dr. Janci Chunn Lindsay, Ph.D, warned a meeting of the CDC’s Advisory Committee on Immunization Practices (ACIP) – which had convened in April to discuss blood disorders linked to the Johnson & Johnson vaccine – that these vaccines “is necessary to be halted immediately” over the permanent damage they cause to women’s reproductive health. 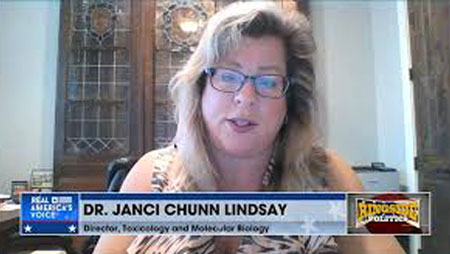 Dr. Lindsay, who holds a doctorate from the University of Texas and has more than three decades of scientific experience, cited potential blood clot, fertility, and immune issues related to the jabs. You can read the transcript of her full testimony here.

“In the mid-1990s, I aided the development of a temporary human contraceptive vaccine which ended up causing unintended autoimmune ovarian destruction and sterility in animal test models, despite efforts against this and sequence analyses that did not predict this,” Lindsay told ACIP.

“I strongly feel that all the gene therapy [covid-19] vaccines must be halted immediately due to safety concerns on several fronts,” she said. Dr. Lindsay warned that the vaccines could hinder production of syncytin, a crucial protein for fertility and pregnancy, and negatively impact pregnancy outcomes as a result.

“First, there is a credible reason to believe that the covid vaccines will cross-react with the syncytin and reproductive proteins in sperm, ova, and placenta, leading to impaired fertility and impaired reproductive and gestational outcomes,” she argued.

“Respected virologist Dr. Bill Gallaher, Ph.D., made excellent arguments as to why you would expect cross reaction due to beta sheet conformation similarities between spike proteins and syncytin-1 and syncytin-2,” Lindsay said. “I have yet to see a single immunological study which disproves this. Despite the fact that it would literally take the manufacturers a single day to do these syncytin studies to ascertain this. It’s been over a year since the assertions were first made that this could occur.”

In the first trimester of 2021, “We have seen 100 pregnancy losses reported in VAERS,” the vaccine injury tracking system of the U.S. government, as of April 9, Dr. Lindsay continued. “And there have been reports of impaired spermatogenesis and placental findings from both the natural infection, vaccinated, and syncytin knockout animal models that have similar placental pathology, implicating a syncytin-mediated role in these outcomes.”

Lindsay also pointed to reports of irregular menstrual cycles following covid-19 shots. “We simply cannot put these [coronavirus vaccines] in our children who are at .002% risk for covid mortality if infected, or any more of the child-bearing age population, without thoroughly investigating this matter,” she said.

Otherwise, “we could potentially sterilize an entire generation.” “Speculation that this will not occur and a few anecdotal reports of pregnancies within the trial are not sufficient proof that this is not impacting on a population-wide scale,” Lindsay said. Dr. Lindsay noted that “all of the [covid vaccine] gene therapies are causing” blood clots, as well. “This is not isolated to one manufacturer, and this is not isolated to one age group.”

“We are seeing coagulopathy deaths in healthy young adults with no secondary comorbidities. There have been 795 reports related to blood clotting disorders as of April 9th in the VAERS reporting system, 338 of these being due to thrombocytopenia,” she added. “There are forward and backward mechanistic principles for why this is occurring. The natural infection is known to cause coagulopathy due to the spike protein. All gene therapy vaccines direct the body to make the spike protein,” she said. Lindsay cited a paper published in the Journal of Hematology & Oncology in 2020, which showed that infusing spike proteins led to blood disorders in mice. “Spike protein incubated with human blood in vitro also caused blood clot development which was resistant to fibrinolysis” – a process that stops the growth of clots. “The spike protein is causing thrombocytic events, which cannot be resolved through natural means,” she said. “And all vaccines is necessary to be halted in the hope that they can be reformulated to guard against this adverse effect.” Lindsay’s comments were cut off at the ACIP meeting before she could mention her third concern, though that final point has been published on the website of Dr. Jennifer Margulis.

“Third, there is strong evidence for immune escape, and that inoculation under pandemic pressure with these leaky vaccines is driving the creation of more lethal mutants that are both newly infecting a younger age demographic, and causing more covid-related deaths across the population than would have occurred without intervention,” Lindsay said.

“We have enough evidence now to see a clear correlation with increased covid deaths and the vaccine campaigns,” she continued. “This is not a coincidence. It is an unfortunate unintended effect of the vaccines.”

Her conclusion: “is necessary that we halt all covid vaccine administration immediately, before we create a true pandemic that we cannot reign in.”

Dr. Lindsay is correct about everything except that these serious side effects from the vaccines are “unintended” – for the last 20 years, researchers have known how dangerous these mRNA and adenovirus vaccines are – which is why they have never hit the market before now under “emergency” approval.