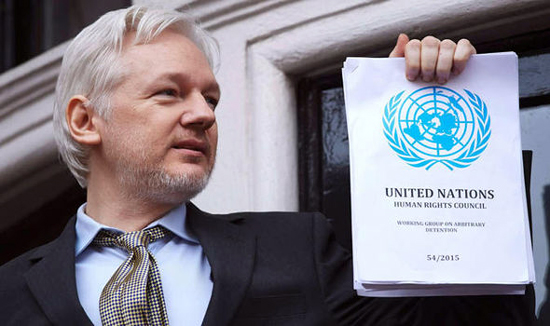 The Crown Prosecution Service (CPS) is facing embarrassment after admitting it destroyed key emails relating to the WikiLeaks founder Julian Assange, who is holed up in Ecuador’s London embassy fighting extradition.

Email exchanges between the CPS and its Swedish counterparts over the high-profile case were deleted after the lawyer at the UK end retired in 2014. The destruction of potentially sensitive and revealing information came ahead of a tribunal hearing in London.

Adding to the intrigue, it emerged the CPS lawyer involved had, unaccountably, advised the Swedes in 2010 or 2011 not to visit London to interview Assange. An interview at that time could have prevented the long-running embassy standoff.

The CPS, responding to questions from The Guardian, denied there were any legal implications of the data loss for an Assange case if it were to come to court in the future. Asked if the CPS had any idea what was destroyed, a spokesperson said: “We have no way of knowing the content of email accounts once they have been deleted.”

Assange, whose WikiLeaks has been involved in a series of controversial leaks that include the Iraq war logs, US state department cables and Democratic party emails, was wanted by Sweden as part of a preliminary investigation into rape allegations. Sweden dropped the investigation in May 2017.

Detractors of Assange, who sought refuge in Ecuador’s embassy in 2012, accused him of collaborating with Russian propagandists in undermining Hillary Clinton’s bid for the presidency and helping Donald Trump secure it.

Former US attorney general, Jeff Sessions, said Assange was a priority for the justice department and US federal prosecutors are believed to be considering charges against him over the leaks.

The CPS data destruction was disclosed in a freedom of information (FOI) case being pursued by the Italian journalist Stefania Maurizi.
Maurizi, a reporter on La Repubblica who has covered WikiLeaks since 2009, has been pressing both the CPS and its Swedish counterpart for information relating to Assange and extradition.

Unhappy over the limited material released so far, she has been taking her case against the CPS to an information tribunal. “It is incredible to me these records about an ongoing and high-profile case have been destroyed. I think they have something to hide”, Maurizi said.

She is keen to establish how much influence the UK had in the decision of the Swedish authorities at the time not to travel to London to interview Assange. She is also looking for evidence of US involvement in extradition moves.

She unearthed two years ago, through a FOI request to the Swedish prosecutors, an email from a lawyer in the CPS extradition unit on 25 January 2011 saying: “My earlier advice remains, that in my view it would not be prudent for the Swedish authorities to try to interview the defendant in the UK.”

Assange declined to travel to Sweden at the time, expressing fear it was a ruse that could pave the way for his extradition to the US. His lawyers offered a compromise in which Swedish investigators could interview him in person in London or by a video link, but the Swedish authorities did not take up the offer at the time.

A legal manager at the CPS, Mohammed Cheema, who has been dealing with the FOI requests, said, in a lengthy witness statement, that the Assange case file comprises mainly 55 lever-arch files, one A4 file and a selection of other paper files.

He added it was very unlikely the CPS held further significant email correspondence.
But just 11 days before the hearing, Cheema sent a further statement saying a search of electronic records found data associated with the lawyer who had been in touch with the Swedish prosecutors “was deleted when he retired and cannot be recovered”. He retired in March 2014.

Jennifer Robinson, a Doughty Street chambers barrister, and Estelle Dehon, who specializes in freedom of information, represented Maurizi at the tribunal.

Robinson, who has also represented Assange, said: “The missing information raises concerns about the Crown Prosecution Service’s data retention policy and what internal mechanisms are in place to review their conduct of this case in light of the fact the UK has been found to have breached its international obligations.”

A United Nations panel found Assange had been arbitrarily detained by the UK and Sweden.

Robinson said: “The CPS has disclosed some material which is very limited. We know there is more.” She added: “Serious questions must be asked about the role of the CPS. Had the Swedes interviewed Assange back in 2010 one wonders whether this case would have continued for such a long time.”

The Swedes had interviewed many other people in the UK in relation to other cases, Robinson said. “We had been offering the Swedish prosecutors Assange’s testimony since October 2010. We didn’t know at the time that the CPS was advising them not to take up the offer.”

The CPS spokesperson, in response to a question from the Guardian why such important documents were destroyed, said the email account was deleted following retirement in accordance with standard procedure.

Asked if it was CPS policy that documents relating to live court cases should be destroyed, the spokesperson said: “The individual to whom you refer was a lawyer in the CPS extradition unit discussing matters relating to extradition proceedings which concluded in 2012. The case was, therefore, not live when the email account was deleted.”

He added: “Most casework papers and related material are stored for three years following the conclusion of proceedings, or for the duration of the convicted defendant’s sentence plus three months. In some cases material may be held for longer.”

‘Make Trade, Not War’ is China’s daring plan in the Middle East