What do mandatory vaccination and forced sterilization have in common?

What would you say if someone told you that a distraught woman recently came to a counseling office? She explained that her boss threatened that, if she didn’t have sex with him, she would be fired. He’d already banned her from all firm social activities and said that he’d do what he could to destroy her personal life too. After he was done with her, he said, she wouldn’t be able to leave the house. He would take away everything that meant anything to her. She was crying because her boss had already shown how powerful he was. Even though sleeping with him was the last thing she wanted to do, she saw it as her only option. She needed the job and she didn’t want her life ruined. Would you be screaming “sexual harassment”? You should because this definitely fits the definition of sexual coercion and abuse. What a disgusting situation!!! 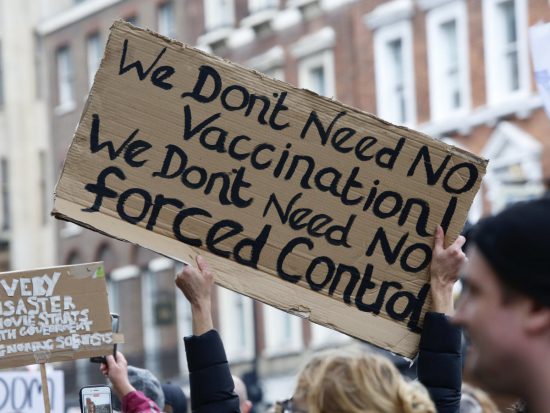 The story above is hypothetical. But, if we change the scenario slightly, the government, MSM, Big Tech, and many other corporate giants are making similar threats against millions of citizens who don’t want to take the Covid vaccination. Magazines such as National Geographic have run articles about it. As the magazine puts it, those who refuse to get the vaccine may not be able to go to the office, attend a sporting event, even get a seat at a restaurant.

When people hear the original scenario about this woman whose boss is sexually harassing her, they are outraged. In fact, the #METOO movement is centered around situations like this. But, when people hear that President is working with private industries to support a vaccine passport that will force many people to get the vaccine against their will, they cheer. Is it because one only affects the individual, while the other affects all the people? Maybe it’s for the greater good? Some clearly believe that everyone should be coerced into stopping the spread.

If you agree with any of these reasons, then have you seen The Handmaid’s Tale? It takes place in a post-democratic America without guaranteed freedom. Radioactive fallout that left many individuals infertile is such a problem that fertile females are used as baby vessels — for the greater good, to ensure the human race survives. These women are forced to have sex with a man who basically owns them. Their rights are already greatly restricted. They have a curfew. They can’t go out. They are completely controlled by the governing body. If they manage to get pregnant, they get more privileges, pampering, and extra rights. But if they refuse to cooperate, they face even harsher conditions.

That fictional scenario is eerily like words from Dr. Leana Wen, Public Health professor, at George Washington University. She said Americans need a “carrot” to “incentivize” them to get vaccinated. Take the vaccine. “We need to make it clear to them that the vaccine is the ticket back to pre-pandemic life.” If people aren’t coerced, “people are going to go out and enjoy these freedoms anyway.” Ironically, she is a former Planned Parenthood president. You know – “My body, my choice.”

If everyone allows the government to take away people’s right to choose what to do with their bodies and to “incentivize” freedoms based on the choice to take a vaccine, then it will stop there? Can people be sure that they won’t be a vaccine version of handmaids in 10 years? Maybe they’ll tell families how many children they are “allowed” to have, à la Communist China. It’s “for the greater good.”

Don’t think that this TV fiction could never occur. In the 1905 case of Jacobsen v. Massachusetts, the Supreme Court ruled that Jacobsen could not refuse the smallpox vaccination. The Court’s Progressive majority held that the US Constitution does not always allow freedom for all because there are “manifold restraints to which every person is necessarily subjected for the common good.” For that reason, statute legislatures could mandate compulsory vaccinations, enforced by the state’s police power, to “secure the general comfort, health and prosperity of the state.” In other words, for the “greater good.” (Smallpox, incidentally, had a 30% mortality rate.) Ultimately, Jacobson was fined $1,000 in today’s dollars.

Given smallpox’s deadliness, maybe that was aberrant. However, Jacobson’s case was later used against a woman named Carrie Buck with another Progressive Supreme Court agreeing that the government could forcibly sterilize her: In one of the most chilling statements in American jurisprudence, Holmes declared, “It is better for the world, if instead of waiting to execute degenerate offspring for crime, or to let them starve for their imbecility, society can prevent those who are manifestly unfit from continuing their kind. The principle that sustains compulsory vaccination is broad enough to cover cutting the Fallopian tubes. Three generations of imbeciles are enough!”

If a case favoring mandatory vaccination could authorize forcible sterilization, why couldn’t it be used for forcible impregnation? Or because of “climate change”, to place a limit on the number of children someone can have?

If you think The Handmaid’s Tale and Carrie Bucks case sound scary, you should think twice about giving the government and government-allied businesses the power to force people to carry a vaccine passport to “resume normal life” or to mandate vaccines, all for “the greater good.” When they use that power to come after something that is important to you, you can no longer say no.