YOGA PRANAYAMA techniques are clearly confirmed: The Rhythm of our Breathing Seriously Affects Our Memory and Sometimes Aggravates our Fears 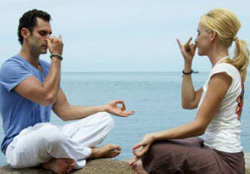 Northwestern Medicine (Chicago, USA) scientists have discovered for the first time that the rhythm of breathing creates electrical activity in the human brain that enhances emotional judgments and memory recall.

“One of the major findings in this study is that there is a dramatic difference in brain activity in the amygdala and hippocampus during inhalation compared with exhalation” said lead author Christina Zelano, assistant professor of neurology at Northwestern University Feinberg School of Medicine. “When you breathe in, we discovered you are stimulating neurons in the olfactory cortex, amygdala and hippocampus, all across the limbic system.”

In other words, accelerated breathing can become an advantage when somebody is in a dangerous situation. When we panic, we always breathe heavily, accelerated. The innate response of our body to fear trough an accelerated rythm of breathing could have a positive impact over the cerebral function and, as a result, a faster way to response to dangerous stimuli in the environment.

The study was published in the Journal of Neuroscience.

The Science Behind Healing with Sound

Tenacity and perseverance are two essential qualities in spiritual practice

5 Great Benefits Kids Can Get From Yoga

Relieve pain caused by tight hips with these 10 hip stretches