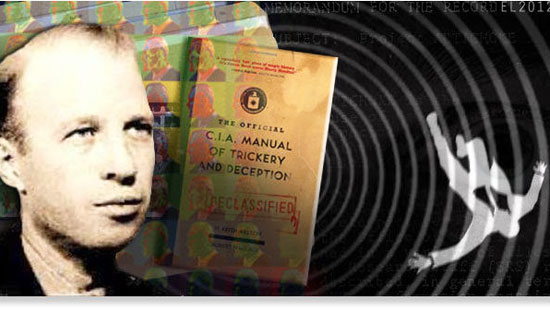 By the early 1950s the CIA’s relationship with drugs stretched from alliances with criminal smugglers of heroin to research in, and application of, lethal or mind-altering chemical agents.

On November 18, 1953, a group of seven men gathered for a meeting at the Deer Creek Lodge, in the mountains of western Maryland. Three were from the US Army’s biological weapons center at Fort Detrick; the other four were CIA officers from the Agency’s Technical Services Division.

This encounter was one in a regular series of working sessions on Project MK-NAOMI, with MK being the prefix for work by Technical Services and NAOMI referring to a project to develop poisons for operational use by the CIA and its clients. The men at Fort Detrick had, at the CIA’s request, already stockpiled a lethal arsenal of shellfish toxins, botulinum, anthrax and equine encephalitis.

A day later, during the evening of November 19, the scientists shared an after-dinner glass of Cointreau. Unknown to those round the convivial table, the CIA’s Dr. Sidney Gottlieb had decided to spike the Cointreau with a heavy dose of LSD. Gottlieb didn’t tell the officers they had been drugged and indeed had violated CIA rules by failing to get prior approval for the experiment.

About thirty minutes after they had tossed back their liqueurs, Gottlieb asked if anyone had noticed anything unusual. The doctor found that most of men round the table experienced a little buzz, but nothing significant. Then Gottlieb fessed up and disclosed the covert LSD dosage.

At some point soon thereafter, one member of the group, Dr. Frank Olson from Fort Detrick, began to embark on what would enter sixties argot as “a bad trip.ˮ One of Olson’s companions said that later that evening Olson became “psychotic.ˮ

Olson was the army’s foremost expert on biological warfare, his specialty being the development of techniques of airborne dispersal for lethal agents. The next morning Olson was still disturbed, and as a consequence the meeting broke up early. Olson went home and, according to his wife, displayed irrational behavior. He seemed to be obsessed with the notion that he had somehow “made a terrible mistakeˮ at the lodge, that he had humiliated himself and that his colleagues had laughed at him.

The Olsons spent a somber weekend, capped by a possibly unwise outing to see the movie “Luther.ˮ

On Monday Olson arrived early in the morning for work at Fort Detrick. He went directly to the office of his supervisor, Lieutenant Colonel Vincent Ruwet, and demanded to be fired, repeating his belief that he had discredited himself.

Ruwet told Olson that his behavior at the retreat had apparently been beyond reproach. Olson was appeased, but not for long. The next day he was back in Ruwet’s office, saying he was “all mixed up.ˮ

Ruwet concluded that Olson was having a mental breakdown and blamed the CIA. He placed a call to Sidney Gottlieb’s deputy, Richard Lashbrook, who had also been at the lodge. Ruwet told the CIA officer that Olson needed immediate psychiatric counseling.

Lashbrook conferred with Gottlieb and they agreed to pick up Olson and send him off to be examined by Dr. Harold Abramson in New York City, who ran the allergy clinic at Mount Sinai Hospital. Abramson was no psychiatrist, but far as Gottlieb was concerned, he had two important credentials: a top-secret security clearance and absolute loyalty to Gottlieb, as one of his most enthusiastic CIA-funded LSD researchers.

As the CIA’s Inspector General, Lyman Kirkpatrick, later concluded, Gottlieb’s paramount concerns were keeping the CIA’s LSD program a secret and self-protection against possible charges that he had bypassed regular procedures.

Olson was taken to New York by Lashbrook and Ruwet. Abramson came to see Olson at their room at the Statler Hilton, and promptly administered the stricken army man a brew of bourbon and Nembutal.

After a cursory interview Abramson decided that Olson was well enough to go home for Thanksgiving. Despite this optimistic assessment, Olson continued to deteriorate. He now believed that the CIA men were out to get him and were spiking his drinks with benzedrine.

The night before they were scheduled to fly home, Olson became delusional: he staggered around the streets of New York, with Ruwet’s voice ringing in his head, ordering him to tear up all his money and throw away his wallet, which the poor man promptly did.

At 5:30 a.m., Olson was found crouching in the lobby of the Statler-Hilton. Lashbrook and Ruwet got him to his room, cleaned him up and headed for the plane to Washington. Back in D.C., Olson begged Lashbrook and Ruwet not to take him home because he feared that he might become violent and hurt his wife and children.

Gottlieb was called to Lashbrook’s apartment to examine Olson; he quickly concluded that Olson had to go back to Abramson. Lashbrook took Olson back to New York, where Abramson spent a few hours with him before determining that Olson was still in a psychotic condition and well beyond his own capabilities as an allergist who dabbled in the covert administration of hallucinogens.

He recommended that Olson be confined at Chestnut Lodge, a Rockville, Maryland asylum on the CIA’s list of trustworthy institutions. Olson agreed to this plan, but his handlers couldn’t book a flight till the next day. Late that night, Lashbrook claimed, he awoke to see Olson run across the room and jump through a curtained and closed window. The glass broke and Olson crashed down to the street from the tenth-floor room.

Lashbrook immediately began to cover the CIA’s tracks. His first phone call was not to a hospital or the police, but to Gottlieb. When the police arrived, Lashbrook told them that he was with the Defense Department and implied that Olson might have killed himself because of job-related stress.

He told the officers that Olson “suffered from ulcers,ˮ but said little else. Surveying the circumstances, New York City’s finest made the assessment, which they entered in police files, that Olson had killed himself because of a homosexual lovers’ quarrel with Lashbrook. 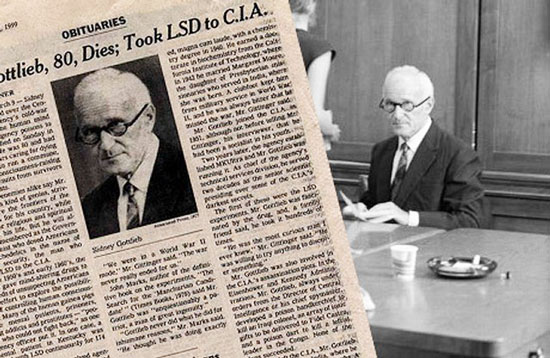 Gottlieb’s men all closed ranks, even lying to the CIA’s internal investigators. Lashbrook and Abramson said that Olson had been beleaguered by depression for some time. They claimed that his wife, Alice, had told them that some months earlier she’d tried to get Olson to visit a psychiatrist.

Years later, when the cover-up began to unravel, Olson’s wife testified that this was an outright lie. For his part, Abramson told the CIA investigators that the LSD given to Olson at the Deer Creek Lodge was essentially harmless and was indeed a therapeutic dosage.

Ruwet had been close to Olson and might have been able to hold his friend together, if Gottlieb had allowed him to accompany Olson on that last visit to New York.

Instead, Gottlieb instructed Ruwet to make a call on Olson’s family and inform them that Olson wouldn’t be back for a few days. Later Ruwet told the CIA that unless the Agency made sure that Olson’s wife received a pension valued at two-thirds of Olson’s pay, he’d go public with what had happened. The CIA agreed to his terms and Ruwet duly kept quiet about the true circumstances surrounding Olson’s death, noting in his own report that Olson had died from “a classified illness.ˮ

After the CIA’s internal investigation into Olson’s death, Inspector General Kirkpatrick wanted to give Sidney Gottlieb a harsh censure. But the doctor had at least two powerful protectors, Director of Central Intelligence Allen Dulles and Deputy Director for Plans Richard Helms.

All they would allow was a mild rebuke to their favorite scientist, saying that Gottlieb had exercised “poor judgement.ˮ The CIA never told the Olson family that Frank had been an unwitting human guinea pig in an Agency drug experiment that went horribly awry. The Olsons weren’t even allowed to examine Frank’s body before his burial. They were told it was in “too bad a condition.ˮ

For twenty-two years Alice Olson and her children resisted the conclusion that Frank Olson had intentionally killed himself. Then, in 1975, Frank and Alice Olson’s son, Eric, by now a 31-year-old clinical psychologist, read a Washington Post story describing the findings of the Rockefeller Commission, which had been set up by President Gerald Ford to report on charges relating to the CIA’s domestic activities.

The story described the death of a man who had jumped from a hotel window after having been secretly given LSD by the CIA. A few days later the Olson family contacted Frank Olson’s old colleague, Vincent Ruwet, who finally admitted what had really happened at Deer Creek Lodge and in Manhattan.

Ever the government man, Ruwet persisted in urging discretion. But by this time, the Olsons had had enough and Ruwet’s counsel was unavailing. A furious Alice Olson and her children went public on national television, demanding that justice be done.

“In telling our story,ˮ read the Olson families’ joint statement, “we are concerned that neither the personal pain this family has experienced nor the moral and political outrage we feel should be slighted. Only in this way can Frank Olson’s death become part of the American memory and serve the purpose of political and ethical reform so needed in our society.ˮ

In the face of mounting outrage, President Ford publicly apologized to the Olsons. But it would be another fifteen years before the family finally received a full settlement from the Agency.

The more the Olson family learned about Frank Olson’s death, the more questions they began to ask. Ultimately, Alice Olson forgave the actions of Vincent Ruwet. But she had only one word for Gottlieb: “despicable.ˮ

The two sons, Eric and Nils, nurture deep suspicions about their father’s death. Olson was one of the army’s top experts on biological warfare and could have exposed the work he and other army scientists had done on developing lethal toxins for the CIA to use in covert operations and political assassinations.

“The implications of this kind of frightened me,ˮ said Eric Olson. “But the story has just never checked out. I felt like I was back where I was at nine years old, scratching my head.ˮ

So long as their mother was still alive, the sons took no major initiative. Alice Olson died in 1993, and soon thereafter Eric and Nils decided to move their father’s body from a cemetery near Fort Detrick in Frederick, Maryland to one where their mother was buried. They took advantage of the removal to have a forensic team examine Frank Olson’s remains.

Eric Olson was present when his father’s body was exhumed. Despite the government’s earlier contention that Frank’s body had been horribly mangled in the fall, Eric found the body in fairly good condition. “I was surprised at how good he looked. He was embalmed and I still recognized him forty years later.ˮ

The forensic pathologist, Dr. James Starrs of George Washington University, found a deep bruise on Olson’s forehead. The bruise was severe enough to have rendered Olson unconscious, but probably didn’t result from the fall.

Starrs also discovered no evidence of cuts from broken glass that should have been present had Olson leaped out a closed window. Starrs concluded that the evidence was starkly suggestive. At a press conference in 1995, Starrs spoke of the “desperate need for subpoena authority.ˮ

Federal prosecutors refused to pursue the inquiry. The CIA’s spokesman, Dave Christian, said there was no need for further investigation since Congress had thoroughly scrutinized the Olson case in 1977 during hearings chaired by Senator Edward Kennedy. Kennedy himself declared that his probe “had closed the book on this sorry chapter.ˮ

In order to reach this conclusion, Kennedy had contrived to give Dr. Gottlieb immunity from prosecution in exchange for his (exceedingly obscure) testimony.