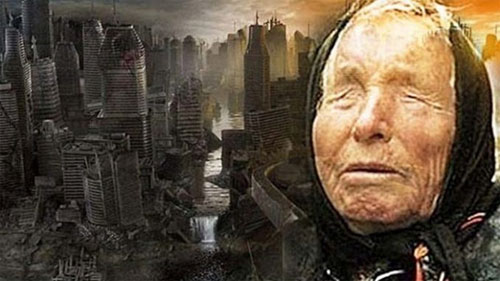 Bulgarian prophet Baba Vanga foretold of a catastrophic World War III scenario which she said would occur shortly after a chemical weapons attack in Syria.

As fears about World War III continue to mount, predictions made by the “Nostradamus from the Balkans” reveals that World War III is due to start this year.

Vanga, who previously predicted Brexit, 9/11, the election of Barack Obama, the Boxing Day tsunami and the rise of ISIS – prophesised that a showdown would occur in Syria where “Muslims would use chemical warfare against Europeans” shortly before she died in 1996.

Mirror.co.uk reports that the prediction is eerily similar to the sarin gas attack.

Many put faith in Baba’s predictions due to the accuracy of her previous prophecies.

Theorists believe she foretold Brexit – even going so far as to say that Europe as we know it will “cease to exist” by the end of 2016.

Moreover she claimed the continent will be left “almost empty” – and be turned into a “wasteland almost entirely devoid of any form of life”.

She foretold that nuclear war would ravage the world and most people die of skin cancer from chemical weapons.

Baba Vanga also appeared to predict that the 45th President of the United States – who we now know to be Donald Trump – would be faced with a crisis which would “bring the country down”.

Her chilling prediction states: “Everyone will put their hopes in him to end it, but the opposite will happen; he will bring the country down and conflicts between north and south states will escalate.”

Some speculate the references to “north and south” could mean North and South Korea. 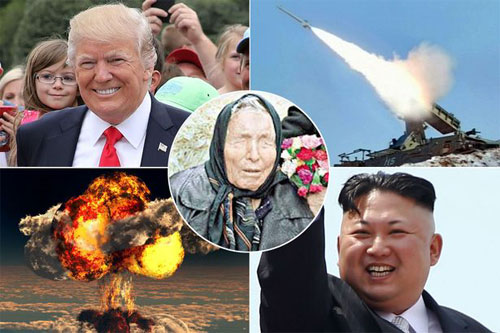 Moreover, Vanga warned than assassination attempts on four heads of states in 2010 would become one of the causes for the start of WWIII. Some dismissed this prediction as incorrect as the heads of state were believed to potentially refer to Obama, Sarkozsky, Netanyahu, Vladimir Putin and Gordon Brown.

However, observers note that Hamas leader Mahmúd al-Mabhouh was assassinated in Dubai on January 19, 2010 and Polish leader Lech Kaczynski was found dead in suspicious circumstances on April 10, 2010. Others point out that Libya’s Colonel Muammar Gaddafi was killed on October 20, 2011 and Saddam Hussein died a few years earlier on December 30, 2006. All were linked to the Arab Spring which Baba Vanga said would set events in motion which would bring about the next global conflict.

Baba Vanga’s predictions have been revisited after another mystic, who accurately foretold Donald Trump’s presidency, claims to know the exact date World War III will start.

Self-proclaimed “messenger of God” Horacio Villegas believes nuclear war will break out on the 100th anniversary of the visitation of Virgin Mary of Fatima (which occurred several times, between May 13 – September 13).

The clairvoyant claims to have envisioned Trump would win the US election as far back as 2015.

He reportedly predicted the billionaire businessman would become the “Illuminati king” who will “bring the world into WWIII”.

Chillingly, one of his prophecies appears to have already come true.

Villegas warned the US leader would attack Syria, which took place in April 2017 when Trump launched a huge air strike on an airbase in Homs.

He also predicted that Trump would bring Russia, North Korea and China into the deadly global conflict – something which, if the prophecy is to be believed, may be just weeks away.

Critics however claim that people will twist Baba Vanga’s prophecies to make them seem true.

Baba Vanga’s prediction over 9/11 is said to be from a statement she made in 1989. She predicted: “Horror, horror! The American brethren will fall after being attacked by the steel birds. The wolves will be howling in a bush, and innocent blood will be gushing.”

Baba Vanga also said that Europe will be transformed into an Islamic caliphate by 2043, Communism will return by 2076 and there will be war on Mars in 3005.