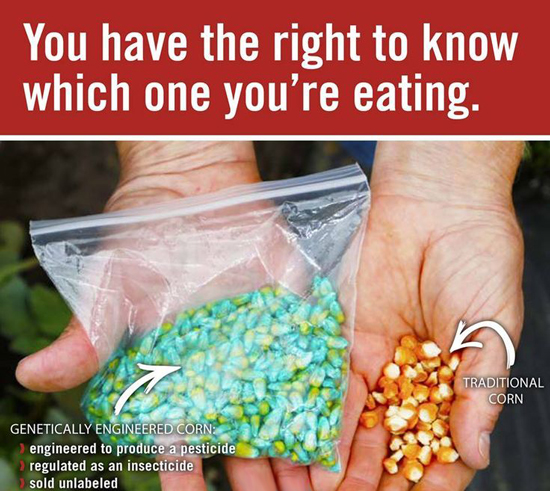 Big Agriculture has found a way to make genetically modified seeds permanent, by quietly writing in “preemptive seed laws” at the state level. In twenty-nine states, men and women at the local level will no longer be able to discuss, debate, or propose laws on the use of genetically modified seeds. The people will not have any voice in their individual cities and municipalities to protect their fields, crops, property, and water from biotech experimentation.

Corporations that genetically modify seeds have infiltrated the state legislatures to further secure their monopoly and prevent scientific scrutiny of their seed experimentation. By passing “seed preemption laws” they can ban public discourse on seed laws at the local level. This is a new attack on free speech and democratic debate. The corporate interests in the agriculture sector want to shut people up who desire natural, unmodified foods. These same corporate interests have been successful in the past with “ag-gag” laws that ban anyone from photographing the abuses of factory farms. Whistleblowers and journalists who tried to document unsanitary and inhuman animal feeding operations have had the law turned against them. In much the same way, these new “seed preemption laws” turn the law against the voices of the common man and woman working locally for change.

Oregon, California, Texas, Montana and Iowa are just a few of the states that have fallen prey to these new laws. These laws are “designed to block counties and cities from adopting their own rules on the use of seeds, including bans on GMOs”. In many parts of the country, decisions on seed use are left up to individual counties, cities, and municipalities. Now, Big Ag is finding ways to snuff out the people’s voices in the matter.

In Texas, legislators are calling the law a “statewide seed standardization law” that gives farmers a “consistent level playing field in all 254 Texas counties”. Texas Farm Bureau State Legislative Director Jim Reaves said that they are working on a bill that would preempt local municipalities and counties from banning certain seeds. “We don’t believe the locals have the science that the state of Texas has. So we think it’s better held in the state’s hands. It will basically tell cities that if you have problem with a certain seed, the state can ban it, but you can’t”, Reaves said, revealing his cult-like support for Big Ag science.

Voting with your money by purchasing organic food is not enough. Biotech experiments go unlabeled in the grocery store and there is no standard on agrichemical testing of foods. Corporations such as Monsanto, Dow AgroSciencies and Syngenta have virtually unlimited resources at their disposal and they know exactly where to put the money to influence and hijack the government and the laws. For instance, these three Big Ag controllers spent more than $6.9 million in three Hawaiian counties to block tighter rules on GMOs. Monsanto and Syngenta spent nearly half a million dollars to fight a GMO ban in Jackson County, Oregon.

This state-level corporate takeover will make all genetically modified seed invincible to the law, unquestioned, unregulated, with no scrutiny or accountability. Everyone within the state will have their hands tied. Genetically modified seed traits are notorious for drifting into neighboring fields, cross-pollinating with natural, organic seeds. When the drift occurs, Monsanto sometimes sues farmers for violating their seed patents.

In other instances, weed killer products designed specifically for the genetic modification of the seed, drift to neighboring fields, damaging crops. Xtend, a broad-leafed Monsanto weed killer product commonly applied to genetically-modified (GM), dicamba-resistant crop seeds, has drifted to neighboring fields and destroyed thousands of acres of crops. Now, these serious issues and more cannot be brought forth for discussion, and no reparations will be made. Everyone will be legally forced to accept what these corporations are doing to nature, the boundaries they cross, and the monopolies they secure, with no resolve.