Brain Washing, Social Control and Programming – Why You Should Kill Your Television 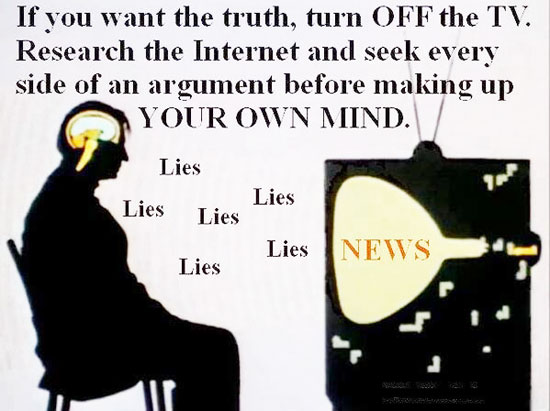 Schooling plays a big role in programming the population, but the most potent and prevalent educational tools are the mass media. These are devised to reach a large audience via the broadcasting of information through natural means (spoken or written language, posters) or technological ones (radio, television, cinema, the internet). With time, the elite have come to control all the important mass media outlets and are now able to dictate their contents.

The trick is easy. All the elite need to do is repeat the same simplistic lies in all the media and the population will believe them without a doubt. This is how lies acquire an irresistible aura of credibility.

A specialist of mass brainwashing, L. Wolfe, explains it further: “As Tavistock’s researchers showed, it was important that the victims of mass brainwashing not be aware that their environment was being controlled; there should thus be a vast number of sources for information, whose messages could be varied slightly, so as to mask the sense of external control.”

Wolfe specified that the contents had to be entertaining and leave the impression that the person always had the choice between various messages and sources. Therefore, the same repetitive information remains hidden behind different and appealing guises.

Around 1920, the Tavistock Institute became the center for the study of human behavior, mind control, propaganda, and social manipulation. Created in London, it spread overseas with the financial help of the Rockefeller Foundation. Its influence increased when it combined the study of anthropology, economy, organizations, politics, psychology, psychoanalysis, psychiatry, and sociology. For example, Tavistock organized social phenomena such as the hippie counterculture and the use of mind-altering drugs. Its primary objectives were and still remain the organization of cultural changes through the imposition of chaos and the occult manipulation of special groups. With a 2012 budget of around 6 billion USD, it is now made up of 10 institutions, 400 subsidiary companies, and 3,000 study groups. In secret, Tavistock guides powerful multinationals such as the Rand Corp. (media, politics, commerce, health, education, defense), the Mitre Corp. (defense, revenue, national security), the Stanford and Hudson Institutes.

After 90 years of research, Tavistock’s main discovery concerns child sexuality. This has a great influence on the development of personality. Early sex stimulation produces adults whose emotional development is similar to that of a neurotic child. Their second discovery is related to stress. Tavistock researchers found out that people under controlled stress became more infantile and gave up strongly held beliefs under group pressure to conform to popular opinion. That explains why the mass media insist so much on sex, violence, and fear-inducing messages. We are being turned into scared, submissive children who try to evade the stress of daily life through emotional masturbation – television, radio, CDs, DVDs, movies and video games.

Westerners spend four plus hours a day, the equivalent of two months a year, or nine years in a lifetime, being hypnotized by a television screen without being conscious of the effects this activity has on them. They have nearly stopped interacting with friends, neighbors, community, and even family. Their free time is spent in imaginary relationships with fictitious characters on the screen.

A few US statistics will show us the extent of the phenomenon: 99% of households own at least one TV; there are 2.24 TVs per family; the television remains open 7 hours a day; 66% eat in front of their television sets. The addiction starts right after birth, since 30% of kids who are 0 to 1 year old and 47% of the 5 to 8 year-olds have televisions in their rooms. A typical US child spends 3.5 minutes per week in meaningful conversation with a parent, but 1680 minutes per week in front of TV. Is this why television is called the “one-eyed babysitter”? By the time they are 65, but most people have seen 2,000,000 TV ads. This phenomenon is becoming global.

The entire population of Earth has become addicted to television. If one decides to quit the TV habit, they experience psychological withdrawal symptoms that can be as severe as those related to drug or alcohol abuse. There is a direct relationship between child obesity – which is severe for 11% of 6 to 17 year olds in US – and advertisements, since the most popular types of commercials are related to junk food. A study counted more than 200 junk food ads during four hours of cartoons on Saturday morning television in the US. When compared with radio listening, television is more impactful because there are pictures. The more there are to accompany a special news report, the more tangible it will seem and the lesser the chance of people questioning its accuracy.
Media expert Hal Becker once said: “I know the secret of making the average American believe anything I want him to. Just let me control television… You put something on the television and it becomes reality. If the world outside the TV set contradicts the images, people start trying to change the world to make it like the TV set images.”

How is it that the elite have been so successful in achieving full control of television programming? Through the assistance of government. Politicians vote and impose laws that favor large TV stations over smaller ones and make it difficult for independent ideas to reach the airwaves. Better yet, most countries have their own sanitized State television stations. 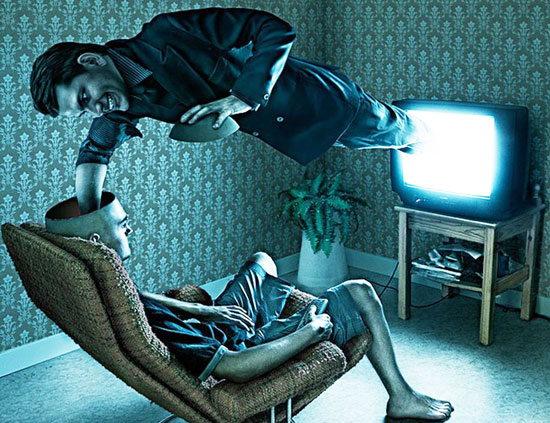 Tavistock hastened to study the effects of television on human behavior as early as the 1940s. Its researchers discovered that 30 seconds after one starts watching TV, the brain automatically begins to produce alpha waves, a modified state of consciousness. The viewer goes into a trance-like mode, a type of light hypnosis. All their attention becomes concentrated on the screen, while the rest of their environment is ignored. In this semi-conscious state, they become highly susceptible to the messages contained in the programs, especially the commercials, which are created especially for that purpose.

Television started becoming popular in the fifties, and the elite have now accumulated more than 60 years of experience spread over three generations of viewers. The results are staggering. People are no longer logical, as their opinions and ideas come directly from television. The images validate what they hear. This filter of tele-opinions gets automatically superimposed over their daily reality, and have become passive members of a plugged-in society, and can no longer think, talk, or write logically. For them, images and knowledge are synonymous.

In Europe, violence on television is as critical as in America. Specialized stations such as Baby TV and Baby First broadcast programs for babies 24/7. When toddlers are one year old, they are already watching at least one hour of television a day. Statistics from 1988 showed that during one week of TV watching, viewers witness 670 murders, 15 rapes, 848 fights, 419 shootings or explosions, 11 armed robberies, 8 suicides, 32 hostage takings, 27 torture scenes, 13 strangulations and 11 war scenes. Nowadays, these types of events are not reserved to late hours. For example, Quebec’s popular TQS station presented the movie Terminator at 6:30 pm – just in time for kids.

And it’s Getting Worse!

Ever heard of Silent Sound Spread Spectrum or SSSS? It is a secret Pentagon psychotronic technology that has been operational since 1990. In 1991, it was used during the first Gulf War to manipulate Iraqi troops into surrendering en masse. Like compliant children, 200,000 men came out of their desert bunkers and fell to their knees before approaching US troops.

The SSSS is now available in your neighborhood – free of charge. It is carried to your brain with the use of several technologies, including chemtrails, cell towers and high definition digital television (HD-TV). In this way, the elite is aiming for total mind control to insure the compliance of its citizenry. Now you know why the US government was so enthusiastic about letting people get digital converter boxes for a cheap price, because they want them to have access to high-quality television images.

Big Brother goes even further with digital streaming video that allows any person with a personal computer linked to the internet to access and watch popular television programs. This is available for free through companies such as Hulu. In this way, computer monitors and HD-TV screens broadcast SSSS and combine it with subliminally-pulsed images to bring about specific emotions and physical responses to all listeners or a selected type of DNA (Blacks, Orientals, women, etc.). If the elite have a sample of a person’s DNA, it can even target selected individuals. Experimentation has shown that it is effective – with varying levels of efficiency – with about 85% of the population, while the remaining 15% seem to be immune to such mind control attempts.

What Should We Do?

What should we do now that we know? Well, truth is useless if we do not change our actions.

Number one: throw out the television. Even without this new mind-control technology, the television has always been a “box of lies”. Watching TV lowers one’s intelligence, and many statistics are there to prove it. Forget the “good educational shows” that are simply there to misinform you.

Number two: limit the time you spend in front of the computer and on the internet, and never watch TV shows from the internet.

Number three: avoid other sources of TV – do not use cell phones (whether “smart” or not). Basically, it is like putting your head in the microwave oven and pushing the ON button.

It is difficult to avoid chemtrails, but living a TV-free and cellphone-free life is possible – you get so much more time to read, think (for yourself), meditate, exercise, cook and keep good company.

The elite have hijacked our brains with their technology, but we still have our free will. We can choose to use it or not to use it. Which one will you choose?