CDC Knowingly Lied About Mercury in Vaccines: Proof Has Surfaced 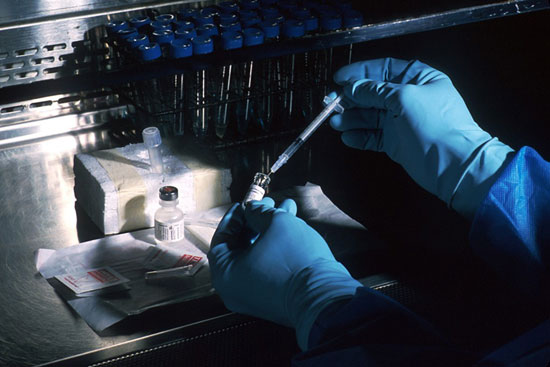 Finally it’s coming to light and the fact is being told: Vaccines given to infants contained inordinate amounts of ethylmercury in the form of Thimerosal; the CDC knew about it and conspired to keep the devastating reality of mercury damage from healthcare consumers and public health agencies. A true crime against humanity and nothing short of federal agency child abuse!

Thanks to the intrepid vaccine safety advocacy work by Robert F. Kennedy Jr. and his writing partner Lyn Redwood, we learn that: “FDA’s Center for Biologics Evaluation and Research (CBER) was responsible for adding up the cumulative exposure to mercury from infant vaccines, a simple calculation that, astonishingly, had never been performed by either the FDA or the CDC. When the agency finally performed that basic calculation, the regulators realized that a six month-old infant who received thimerosal-preserved vaccines following the recommended CDC vaccine schedule would have received a jaw dropping 187.5 micrograms of mercury.”

Those calculations were made back in the late 1990s and CDC officials have been covering up their criminal vaccine consensus science ever since! Those actions should be prosecuted as crimes against humanity, including excessive child abuse by a government agency, and the CDC should be revamped from the inside out; restructured; and “surgically” separated from Big Pharma.

The CDC brainwashing of the global medical profession, international health agencies and the media regarding the deceitfulness of vaccine “safety” is nothing short of criminal action, which must be addressed at every level: local school districts, state health agencies, national courts globally, and the World Health Organization, a “mouthpiece” of CDC’s deceitfulness and fraudulent research and health recommendations. None comes to mind more so than the CDC’s always trotting out the indicted Poul Thorsen’s infamous research that vaccines don’t cause autism! 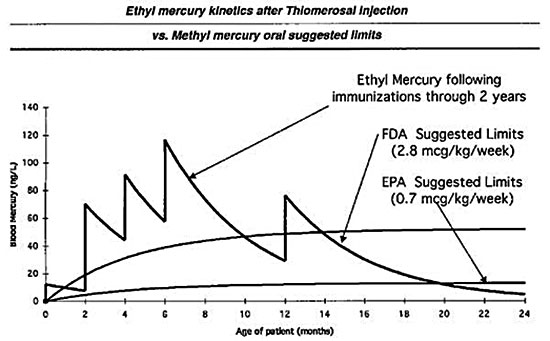 What does mercury affect in the human body? The brain and central nervous system!
The chart above represents models of mercury in blood and tissues formulated by Dr. Barry Rumack, MD, a consultant who offered “toxicologic and pharmacologic evaluation of drugs, biological and potentially toxic or hazardous agents for government and industry”.

According to Kennedy and Redwood’s article, “There was no point in time from birth to approximately 16-18 months of age that infants were below the EPA guidelines for allowable mercury exposure. In fact, according to the models, blood and body burden levels of mercury peaked at six months of age at a shockingly high level of 120ng/liter. To put this in perspective, the CDC classifies mercury poisoning as blood levels of mercury greater than 10 ng/L.”

A most egregious aspect of the cover up is what happened within the CDC, as reported: “The FDA assigned a pediatrician with little knowledge of toxicology to oversee its public reporting. When Dr. Leslie Ball was asked why she reported the mercury exposure levels in this deceptive fashion, she responded: ‘That is what I was told to do’.”

The Kennedy-Redwood article, which we recommend you to read in full, ends with: “Ignoring Etzel’s [U.S. Department of Agriculture’s Ruth Etzel, MD] wise advice, the CDC elected to paper over their catastrophic mistake and double down on vaccine mercury. By continuing to allow thimerosal to be used in vaccines, the CDC is causing harm to American pregnant women, their growing babies and to 100 million children all over the planet. And now we have proof that our regulators know exactly what they are doing.” 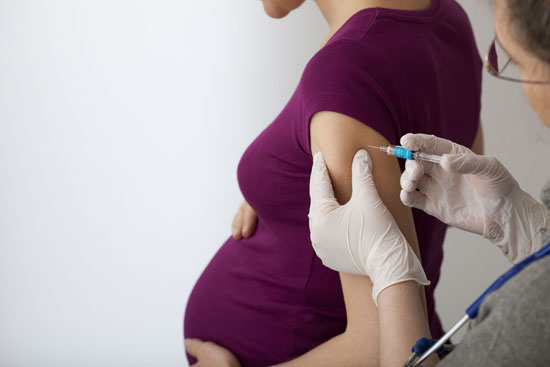 After taking office, President Trump discussed with Robert Kennedy Jr. about heading up an investigative commission regarding vaccines. But that was just a discussion, nothing much happened since. The commission is not established yet. Here are some concerns:

– Robert Kennedy Jr. could meet up with his uncle’s and father’s fate of being shot. The criminal elite goes to any lengths to protect their turf and enforce their agendas.
– Big Pharma could be allowed to get more than its nose under the tent during the investigation. Big Pharma should be kept in outer space with independent scientists performing all assessments.
– Congress must not turn a deaf ear and blind eye on what’s being uncovered, as Congress probably has more responsibility than anyone by granting vaccine makers what turned out to be a “get out of jail free” card in the vaccine law Congress passed in 1986. It must be replaced with equitable law, since the vaccine court masters do a very poor job of implementing the real intent of the law.
– Vaccine law in the USA must be changed to enforce consumers’ rights to sue vaccine makers individually and collectively for promoting fraudulent vaccine science; product liability disasters; child abuse; and crimes against humanity.
– Big Pharma and its lobbyists by law must be prohibited from lobbying Congress and federal agencies.
– Pregnant women should not be mandated to receive vaccines.

Nothing short of the above even can begin to rectify some of the horrors perpetrated upon several generations of children globally. California should be ashamed of itself and its SB277 Bill on mandatory vaccines! Richard Pan, MD, should be struck from medical licensure and not permitted to practice.

Also, Robert Kennedy Jr. would do great to take a very serious look at microwave radiation EMFs/RFs and the non-thermal radiation wave adverse health effects they are causing. Some predict they, along with G5-in-the-sky, will be worse than the autism pandemic we are experiencing in our children: one in 10,000-15,000 in the 1970s; one in 68 nowadays (in the USA).

We’ve seen the demonstrations for women’s rights after the Trump inauguration. Well, why weren’t such demonstration organized to protect the rights of fetuses, newborns, infants, and toddlers being subjected to apparently legal and condoned chemical child abuse which is making them the sickest demographic statistic of all time for children regarding chronic diseases?

Chronic conditions now affect 15 percent to 18 percent of children and teens, and even those estimates may not fully account for obesity and mental health woes, the Harvard team said.

Let’s protect the future of humankind, our children!

16 Ways to Bring Positive Energy into Your Life