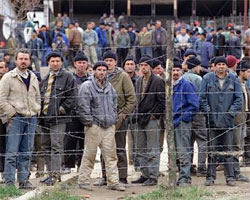 With regard to self-granted federal regulations, the federally controlled medical management agencies in US have granted themselves the right to declare someone a medical threat for an absolutely harmless illness and then ship these people off to a FEMA (Federal Emergency Management Agency) camp which is operating under the guise as medical detainment facility, however, it operates with no medical personnel. This is a backdoor into mass FEMA camp detentions. 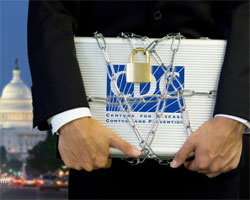 With its Notice of Proposed Rulemaking (NPRM) in the Federal Register on Aug. 15, 2016, the Centers for Disease Control and Prevention (CDC) has greatly expanded the draconian power of the government over the lives of the American people when it relates to health matter or a pseudo-health matter.

Barbara Loe Fisher, the President of the National Vaccine Information Center (NVIC), stated: “Today, the American people are challenged, as they have never been before, to confront the expansion of government authority over our bodies and the bodies of our children, specifically the exercise of police power to take us into custody and isolate us without our consent whenever public health officials believe we are sick or could become sick.”

The CDC, with its NPRM, is seeking to “restrict the freedom of a person entering the U.S. or traveling between states if they believe the person is infected or could become infected with certain kinds of communicable diseases.” So, now we are looking at pre-crime as an excuse to incarcerate people related to the controversial issue of vaccinations.

In part, these regulations will be used to impose the emerging mandatory vaccination laws. Are there any limits to the authority of the federal government with regard to vaccinations? According to the aforementioned documents, there are no limits placed in this new authority and the conditions, under the law, this could easily be expanded to the simple cold or the flu. Would this new authority open the way for the U.S. government health officials to eventually restrict travel via automobile, bus and train from state to state?

Amazingly, the NPRM calls for airline and cruise ship personnel to increase surveillance of travelers into the U.S. and those traveling between states, but states have the greatest authority under the Constitution to use police powers to control infectious diseases within state borders. It is all about the money. The CDC currently funds many state initiatives when it comes to health. Subsequently, the federal government, in the form of the CDC will be able to take control of every state health agency. Fisher stated that medical enforcement authorities could be detaining, isolating and quarantining of people in the U.S. “who appear ‘unwell’ but are otherwise simply going about minding their own business”. 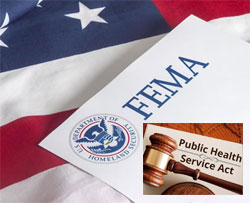 When we begin to connect the dots, under Obamacare, all medical records are accessible by the IRS (Internal Revenue Service) in violation of HIPPA (The Health Insurance Portability and Accountability Act) regulations. Since the US medical records are part of federally tracked electronic medical records as well as vaccine tracking systems which are also accessible by the IRS, these officials now have the ability to determine from our medical records if we have had all of our vaccinations. If not, you could be subject to medical detainment for not getting your vaccinations, or your children could. Also, please make note of the term “other infections”. This is a blank check for the federal government to detain you for any “perceived” condition.

In fact, Fisher goes on to say that the CDC is granting itself the ability to detain and quarantine people without their consent.
Fisher is quick to point out, there are “many viral and bacterial infections that occur quite often in our country. These conditions give the CDC the authority to act upon every infection that has the potential to spread and cause harm or even death to some people (e.g. flu and bronchitis)”.

The previously cited documents specify some of the symptoms that “could get you detained” under the CDC’s NPRM include vomiting, diarrhea and a fever of more than 100 Fahrenheit degrees (37.7 Celsius) − symptoms that can be caused by everything from “allergic reactions, inflammatory bowel disease, salmonella and norovirus infections to hangovers and the common cold”.

What this clearly states is that any citizen in the US, at one time or another, could be and will be detained under these new guidelines.
The US Government has just granted itself the authority to round up people who are not “feeling well” and therefore, pose a danger to society because they “might pose a threat”.

When health authorities come and arrest you because you have a temperature in excess of 100 degrees, NPRM regulations state that you can be held for up to 72 hours without the right to contact a lawyer to appeal your detention. You would be asked to sign a contract with the CDC agreeing to submit yourself or your minor children to such “public health measures” as “quarantine, isolation, conditional release, medical examination, hospitalization, vaccination and treatment.”

According to Fisher, if you refuse to sign the CDC documents, CDC officials, or their designees, can still do whatever they want because “the individual’s consent shall not be considered a prerequisite to any exercise of any authority” by the CDC. When you are released from medical detention, you can be electronically tracked and monitored. These regulations make a nice addition to the police state surveillance grid.
There are more government documents that talk about the disposition of people who are medically detained that are very disturbing.

More Words from the US Government 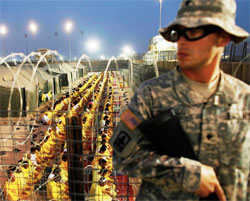 Amazingly, FEMA camp documents specifically address this health issue. Straight from the Internment/Resettlement article (FM 3-39.40 1-5) – it states the following: “…I/R operations may place Soldiers in continuous contact with or near insurgents, terrorists or criminals who will exploit every opportunity to escape and kill or injure U.S. personnel or multinational partners.”

Army document, FM 3-39.40 1-5 speaks clearly to the fact there is absolute intent to use foreign military assets to imprison American citizens and to detain them in what we have to come to call FEMA camps.

How will these foreign assets be utilized?

When an illness strikes, the changes in the handling of the stricken patients have already been planned for through a series of legal actions, most of them are Executive Orders. For example, the Executive Order entitled Revised List of Quarantinable Communicable Diseases amends Executive Order 13295 passed by George W. Bush in April 2003, which allows for the “apprehension, detention, or conditional release of individuals”, and Ebola is specifically mentioned.

Obama took this portion of the Executive Order to a whole new level. Obama has granted his administration the authority to detain, in any manner deemed necessary, any person who demonstrates any degree of respiratory distress. This means people with noninfectious asthma could be detained.

When the forced transport of these patients begins to occur, relatively healthy people will be joining them in this death parade march to camps being run with foreign assets.

Any illness will be the impetus to send people to camps, however, this is by no means the end game. These camps will quickly morph into martial law detainment camps for American dissidents. One could imagine that many alternative media broadcasters will develop asthma over the next several months.

As it was previously reported, evidence has been found supporting these claims in a federal document entitled Emergency Support Function #8 (ESF #8) – Public Health and Medical Services Annex.
This document is exceptionally obscure, but it can be accessed in the following manner – by Google-ing “ESF #8” and you will arrive at the following listing and a PDF will appear: Emergency Support Function #8 – Public Health and Medical – FEMA, which you can also find at this link. There, you can read: “Federal Emergency Management Agency Medical Services include responding to medical needs associated with mental health […] assistance are executed by ESF #8 in coordination with DHS/FEMA […] primarily for communications, aircraft and the establishment of base camps.” 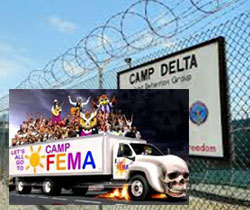 We call them FEMA camps, however, Human Health Services will be in charge and they work closely in conjunction with the United Nations. These camps could indeed begin as FEMA detainment camps for designated patients, but quickly morph into other more nefarious and lethal purposes. Below are some examples of what we’re speaking about. Does the part about the use of foreign troops bother anyone else?

It has been previously told by military sources that when families are transported to the I/R camps, husbands will be segregated from wives and children from parents. As it turned out, the sources were reliable.
“Detainees may also be segregated by ethnic and family groups and further segregated to protect vulnerable individuals. Additionally, detainees may be categorized by behavior (cooperative, neutral, or combative) to accurately resource guards and facilities. Juveniles within the I/R population are typically segregated from the general population.” (Department of Defense Directive 3115.09)

Agencies concerned with internment and resettlement

These are pretty much the same agencies which are identified to be involved in the HHS illness-related detainment camps. There are absolutely no medical organizations, such as the CDC and NIH involved in the oversight, staffing and maintenance of these camps. These are death camps, plain and simple. It is increasingly clear that any health crisis will be used to impose medical martial law. 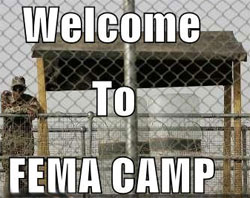 These dots, seemingly unrelated, when examined as a cohort, clearly point to what is coming. The direction is clear and the end result is unmistakable.
It is crystal clear from the language of FM 3-39.40 1-5 that medical martial law will first be imposed. Very quickly and under the auspices of foreign troops, medical martial law will give way to full blown martial law complete with FEMA camps and the roll out of the American Holocaust. If you have wondered why Americans are seeing an increased UN presence on their soil, you just have found out the reason.

Interestingly, recently, FEMA unveiled the Nationwide Emergency Alert System and conducted a series of tests. One would have to blind to not see what is coming.

This is the classic one-two punch. The NPRM, the CDC and HHS will roll out this backdoor move to incarcerate millions without due process. The detainees will be shipped off to their final destination. Ironically, the person with the biggest cough will be the one who will most likely be in charge and implementing this draconian program.