COUP-IN-PROGRESS: Pelosi, the Mafia and the Black Nobility (1) 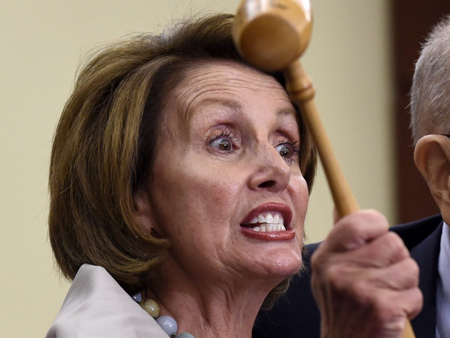 Really, how did a seriously senile and often batty Nancy Pelosi ascend to the House Speakership…again? The Black Nobility, that’s how!

California Representative Nancy Pelosi was recently (January 2019) reinstalled as House Speaker by her Deep State masters to eventually become the first female president of the United States.
She has been groomed from the beginning of her political career to be the quintessential court jester of American politics.
Everyone knows the jester just like they know the town fool.
They will do or say just about anything, no matter how foolish, as a means of getting everyone to underestimate them.

That’s not to say that Nancy Pelosi wasn’t purposefully selected for this pivotal role because of her old age, increasing mental deficits and temperamental nature. These specific characteristics are then taken advantage of by her Deep State handlers to advance the New World Order agenda to undermine the American Republic. In other words, Pelosi is a super-medicated globalist whose prescription drugs literally keep her on the NWO reservation.
Don’t be fooled by the crafty Pelosi.

Italian names that end in “i” are often the namesakes of those whose ancestry is Northern Italy.
The major cities of this region of the Italian peninsula – Venice, Genoa, Milan, Turin, Florence and Bologna – are where the world’s first corporations were formed in the late 13th century.
Venice and Genoa are also where the Black Nobility established the first banking houses that effectively ruled the world for centuries… right up until today.

Real power never changes hands. It appears to, but it never really does. What does change is the location and the family and the milieu, but the true source of authentic power stays the same.
The point is that these people are not stupid; they created the most ingenious model of business and commerce the world has ever known – the CORPORATION. If Satan himself were to fashion the perfect entity by which to carry out his diabolical schemes, it would be today’s corporation (e.g. Monsanto, Facebook, Google, etc.)

Of course, the British took this demonic concept to a whole new level with the incorporation of the notorious British East India Company in 1600. That happened because the Black Nobility chose London to be their new banking headquarters when they quite deliberately decided to use the English language to colonize the then-known world.

Many explosive exposés have been written about the British control of and subterfuge against the US government and it’s all entirely true. The Financial District in the City of London was essentially set up by the Black Nobility thereby making the Crown Temple their UK-based high command. The London banksters are merely the latest and most powerful incarnation of the Black Nobility banking houses. This is how The British Crown, Privy Council and City of London effectively rule America. And why “Crowngate” is the greatest criminal conspiracy in U.S. history.

With this critical knowledge it should be easy to understand that the Black Nobility was the ultimate successor of the Babylonian Brotherhood of ancient Middle East. And that the successors of the Black Nobility are the Illuminati bankster families of not only London and Paris, but also Frankfurt and Munich, Zurich and Luxembourg City, New York City and San Francisco. (San Francisco is also home to Wells Fargo, Charles Schwab Corp. as it was to the Bank of America.)

The Rothschilds and Rockefellers are just two of the banking family institutions that are actually fronts for the Black Nobility families which much prefer to stay completely hidden from view. The Morgans and Mellons are two other American front banking families.

Back to Nancy Pelosi

Nancy Pelosi was born in Baltimore’s Little Italy. That her father, mother and brother were all-powerful politicos in the Baltimore area was no accident of fate. They were put there with purposeful design by their Black Nobility sponsors. And they may not even know who they were. 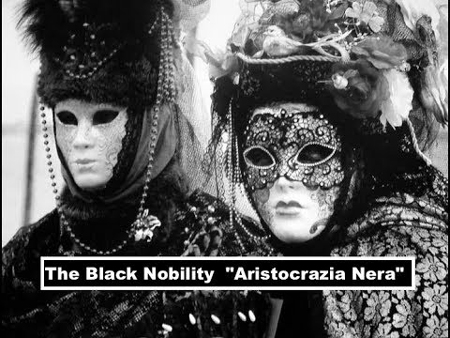 There are very few unplanned events in American political life. Or else how does a mentally challenged Italian-American woman become the first female Speaker of the House – twice! Such pivotal power plays can only happen by strings being pulled by puppeteers at the very top of the global food chain – the Black Nobility.

Really, how else does a thoroughly corrupt and dementia-afflicted 78-year-old ultra-liberal Democrat become Speaker – two times in a decade?!?!
Her babbling and stumbling political performances ought to have disqualified her from holding public office – PERIOD; and yet she is instead promoted to the third most powerful position in American government.

Many political scientists and historians have pointed out over the years that the Speaker of the House is actually the most powerful position in the U.S. Federal Government since that position effectively controls the public purse. In this way, even the POTUS and U.S. Attorney General can be defunded and practically put out of business.

How, pray tell, did Pelosi suddenly get elected by the Democrat majority when so many in the caucus were screaming for new leadership. Even the crazy liberals understandably couldn’t take her anymore. Pelosi made them all look bad… as if the progressive crazies ever cared how they were perceived by the body politic. But that’s just how bad Pelosi made the Democrat caucus look, as she still does.

More than any other year, 2018 showed the raw power that the Pelosi clan possesses. How she secured her election – with so many haters here, there and everywhere – is a study in the politics of blackmail and bribery, extortion and coercion.
Well, who does that sound like?
That’s right— the MAFIA.

For the past two millennia two of the most powerful organizations on the planet have been the Roman Catholic Church… and the MAFIA. And both stand solidly behind Pelosi, as they stood squarely behind the D’Alesandro political family in Baltimore.

“San Fran Nans father was a Congressman, then Mayor of Baltimore — he was forced to drop out of a race for Governor when he was caught taking money from a career criminal. She [Nancy] hung around murderers, thieves and folks that used government officials to buy their fortunes.” (journalist Stephen Frank)

What follows is a video that provides the historical record which documents the connections between Nancy D’Alesandro Pelosi and the Mafia. But, first, here is a highly informative link with hard evidence linking Pelosi’s blood family to the Baltimore Mob: Congresswoman Nancy Pelosi’s Father Thomas D’Alesandro Jr. Was “Constant Companion” Of Notorious Mobster Benjamin Magliano.

Quite shockingly, even her own daughter has provided anecdotal evidence to the tactics that Nancy employs that are startlingly similar to the Mob. Nancy Pelosi’s daughter said: “She’ll cut your head off, and you won’t even know you’re bleeding”.

Very few are aware, but when Italians immigrated to America during the last century, many became captive to the big Mafia families once they arrived stateside (not all of them, but a good number who were desperate to eke out a living). Eventually many of these freedom-seeking immigrants fell into one of two camps – they joined the Mafia clans that dominated the region of Italy from which they came. Or, they associated with the white-collar Mafia that was established in the USA. The latter group was populated by politicians, attorneys, accountants, developers and other businessmen. 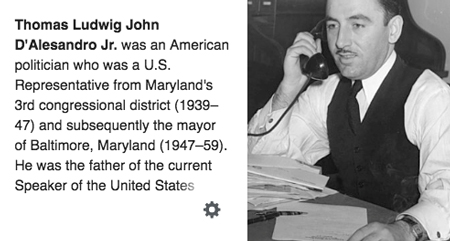 The crux of this new narrative, that was destined to be exposed about “Pelosi the Mafioso”, is that she really does act like a California Mob boss, only in the present case, a political Mafia don. And that’s exactly how she runs the Speakership, as an exposé by one of her CA peers points out: “Pelosi Runs Her Speakership Like She’s a Mafia Don”.

In Italian, the word MAFIA is an acronym for “Mazzini Autorizza Furti, Incendi e Attentati” which translates to “Mazzini Authorizes Theft, Arson and Kidnapping”. Genoese Giuseppe Mazzini was a hardcore Jacobin and rabid globalist who implemented his agendas as if “the ends justify the means”, no matter how violent or destructive.

The MAFIA has reigned supreme wherever it chose to set up shop in America and beyond. The much more recent Sicilian mafia was actually a latecomer to the terrorism game and was modeled after the original MAFIA families of Northern Italy that were formed to terrorize their enemies in order for the powerful banking families to maintain their ascendancy. The Venetian Mafia – the Mala del Brenta – was in fact one of the first to highly organize, although their Wikipedia page conveniently does not leave that impression. 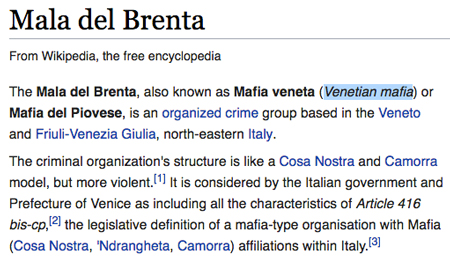 The “MAFIA-like brotherhoods” throughout the Middle East, that formed before those in Northern Italy, were the original terrorist groups which have operated over millennia. The Northern Italian banksters simply perfected the art of terrorism since they had the money to do so. After all, taking down the Twin Towers right into their own footprint took a big chunk of change (Yes, we know Israeli-Saudi connection, but they were merely the hitmen and bagmen, respectively, for the all-powerful Black Nobility).

The Italian Mafia and the Khazarian Mafia have always been joined at the hip. The Italian bankers of the Black Nobility were primarily Jewish; however, there was a lot of intermarriage with the indigenous Catholic noblemen. These purely political marriages of convenience took place regularly to establish a covert culture whereby the court Jews could thrive under the radar, which they did particularly in Rome and in the wealthy northern enclaves.

The important point here is that Pelosi represents a brazen attempt by the Black Nobility to openly seize control of the military arm of the New World Order, also known as the USA.

This observation should be qualified in that Pelosi clearly represents the communist side of the New World Order globalist cabal, which only exists due to the limitless funding of the Black Nobility by Rothschild bagmen such as George Soros. There is likewise a fascist side of the same Black Nobility clandestine society, which has also existed since its very inception.

The stark reality is that money controls the flow of terrorism across the planet and that money is issued by the Black Nobility, just as the operational side of state-sponsored terrorism is executed by Operation Gladio. As an ostensible creation of NATO – that could be called the “North Atlantic Terrorist Organization” – Gladio was initially set up to terrorize Europe post World War II… and terrorize it has done although their operations soon went global.

This very same NATO-directed “strategy of tension” was then exported to the U.S. Department of Defense where it was actually codified by Obama when he signed the NDAA legislation in 2015 prior to the execution of the Jade Helm black operation. A lot of other bad things happened during the Obama years that distinguished the corrupt woman perps for their unparalleled lawlessness and criminality (e.g. Hillary Clinton, Valerie Jarrett, Samantha Power, Susan Rice, Loretta Lynch, Sally Yates, Janet Napolitano, Cheryl Mills, etc.).

Both Hillary Clinton and Nancy Pelosi were identified as female front-women for the New World Order agenda during that dark period. The NWO decision-makers at the very top chose to sell globalism using other female leaders as well; in Europe, Angela Merkel, Theresa May and Christine Lagarde were the pitchwomen. Just look at how swiftly Merkel singlehandedly destroyed Germany before she devastated the European Union. But Frau Merkel could only have accomplished this feat with Gladio working for her full-time while the Black Nobility filled her coffers.