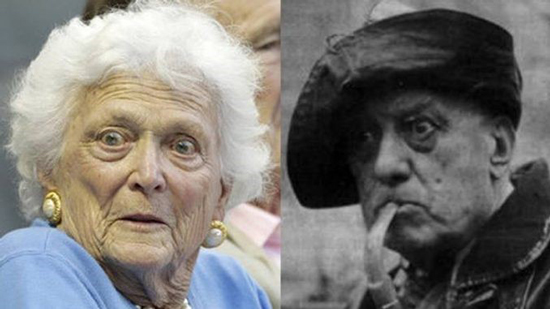 Newly discovered diary entries by notorious Satanist Aleister Crowley reveals he may have been the true father of the late Barbara Bush.
Aleister Crowley, a.k.a., “The Great Beast 666”, was good friends with the maternal grandmother of George W. Bush, Pauline Pierce Robinson (Barbara Bush’ mother).

Most sources divulge little about this woman. We learn more about her husband Marvin Pierce, the president of the McCall Corporation, which published McCall’s Magazine and Redbook. He married Pauline, a beautiful young socialite, in 1919.
Their first child, Martha, was born the next year; the second, James, was born in 1921. At this time, Aleister Crowley inhabited what must have seemed a very different world, as he embarked upon the great communal experiment of the Abbey of Thelema in Italy.

Pauline, however, had a hidden side – what we might call a wild side. We get a whiff of it from this Wikipedia entry: W Magazine once described her as “beautiful, fabulous, critical, and meddling” and “a former beauty from Ohio with extravagant tastes”.

Rumors that Pauline had an affair with Dwight D. Eisenhower have never been verified. Still, gossip tabloids from the ’40s often associated her with prominent men in politics and film.
There is no independent confirmation of the Eisenhower liaison, there is no reason to doubt that it existed. However, we may well have reason to believe that she began her “experimental” period before the 1940s.

A sixth-level initiate within the OTO (the Ordo Templi Orientis, the malefic occult society that Crowley came to head in the 1920s) first set this research path by revealing that Pauline Robinson had befriended an woman named Nellie O’Hara, an American adventuress who, at some point during her European travels, met the famed writer Frank Harris. Despite his advancing years, Harris still maintained a reputation for sexual excess that rivaled Crowley’s. During this period (1919-1927), Nellie and Frank Harris lived as man and wife, although they could not actually wed because Harris’ second wife was still alive and would not grant a divorce.

Harris and Crowley were good friends. Not only that: At this time, and not for the last time, Crowley was very much the proverbial “friend in need”.
During the Abbey period, a Crowley follower had “accidentally” died during a “magical ceremony”. The incident created a firestorm of unwanted publicity (the sensationalist British press labeled Crowley “The Wickedest Man in the World”), which prompted Mussolini’s government to expel Crowley and his followers from Italian soil. By 1924, he lived in poverty in France, where Frank Harris kindly took him under his roof. This arrangement inevitably brought Crowley into contact with Nellie.

Crowley’s diaries clearly indicate that he depended on Harris for financial assistance: “January 3rd 1924 – No luck about cash yet: but F.H. promises 500 fr tomorrow – so that I can bolt to Paris. One step onward to the Establishment of the Law of Thelema.”
The money soon ran out, and AC (as his associates called him) soon had to ask his friend for further assistance. At this time, Harris was writing his multi-volume “erotic autobiography” titled My Life and Loves; he also purchased a newspaper, The Evening Telegram. But he lacked the resources and management skills to make the enterprise a success, and soon found himself in a financial position no better than Crowley’s.

Despite his parlous economic circumstances, Crowley focused his attention on “sex magic”. Not many years previously, he and a follower named Jeanne Foster (a.k.a. Soror Hilarion) had conducted a “sex-magical rite” designed to give birth to a child destined to carry on Crowley’s work. It cannot be determined whether he conducted similar experiments with Nellie, although given the polyamorous proclivities of all the parties involved, one should not discount the possibility.

Nellie’s friend Pauline no doubt scandalized her social circle by traveling to France on her own and leaving two very young children in the care of nursemaids. However, her correspondence with her friend – whose life in France with a famous literary figure must have seemed quite glamorous – can only have inspired a sense of wanderlust. Her husband, increasingly bound to his duties with the McCall Corporation, did not share this spirit of adventure.

Crowley’s diaries for this period record the initials “PVN” a cryptic reference to his favorite sexual position, which some of his partners found distasteful. (The letters derive from the Latin for “By way of the Infernal Entrance”.) This is a common annotation in the records of Crowley’s magical practices. We also find the strange initials “ECL”. After researching the matter for some time, the conclusion has been reached that this is a reference to the practice known as “Eroto-Comotose Lucidity”.

The year 1924 has a special significance in the Crowley chronology. At this time, he is said to have undergone the “supreme ordeal” connected with his attainment of the “Grade of Ipsissimus”, the highest “magical achievement” within his order. The exact nature of this ordeal remains mysterious. An important clue can be found in his description of the rite of “Eroto-Comotose Lucidity”:

“The Candidate is made ready for the Ordeal by general athletic training, and by feasting. On the appointed day he is attended by one or more chosen and experienced attendants whose duty is (a) to exhaust him sexually by every known means (b) to rouse him sexually by every known means. Every device and artifice of the courtesan is to be employed, and every stimulant known to the physician. Nor should the attendants reck of danger, but hunt down ruthlessly their appointed prey.
Finally the Candidate will fall into a sleep of utter exhaustion, resembling coma, and it is now that delicacy and skill must be exquisite. Let him be roused from this sleep by stimulation of a definitely and exclusively sexual type. Yet if convenient, music wisely regulated will assist.

The attendants will watch with assiduity for signs of waking; and the moment these occur, all stimulation must cease instantly, and the Candidate be allowed to fall again into sleep; but no sooner has this happened than the former practice is resumed. This alteration is to continue indefinitely until the Candidate is in a state which is neither sleep nor waking, and in which his Spirit, set free by perfect exhaustion of the body, and yet prevented from entering the City of Sleep, communes with the Most High and the Most Holy Lord God of its being, maker of Heaven and Earth.” This reference is not to God, as it may seem, but rather to Lucifer, whom Satanists perceive as being their god.

“The Ordeal terminates by failure – the occurrence of sleep invincible – or by success, in which ultimate waking is followed by a final performance of the sexual act. The Initiate may then be allowed to sleep, or the practice may be renewed and persisted in until death ends all. The most favorable death is that occurring during the orgasm, and is called Mors Justi.
As it is written: Let me die the death of the Righteous, and let my last end be like his!”

If he did undergo this “ordeal” in 1924, then we must presume that his key associates of that time – including Nellie and Pauline – functioned as his assistants.
Pauline returned to America in early October of 1924. On June 8, 1925, she gave birth to a girl named Barbara. Barbara Pierce married George H.W. Bush, who eventually became the 41st President of the United States.

But who was Barbara’s father? The chronology indicates that it could have been Crowley, but it could just as easily have been Marvin Pierce. The truth regarding Crowlean sexual rituals is disclosed only to the highest initiates of the OTO, in a document misleadingly titled Emblems and Modes of Use.

Is Aleister Crowley the father of Barbara Bush? Even she may not know for certain; nor that this possibility exists. However, more than one person has noted the resemblance – and this resemblance is not just physical. Many will recall the former First Lady’s haughty and thoughtless remarks in the aftermath of the Katrina disaster. Those “in the know” were reminded of Aleister Crowley’s similar reaction to the loss of life which occurred during the ascent of Kangchanjunga, an expedition he commanded: “This is precisely the sort of thing with which I have no sympathy whatsoever.”