US expected to pull out of the Paris Agreement 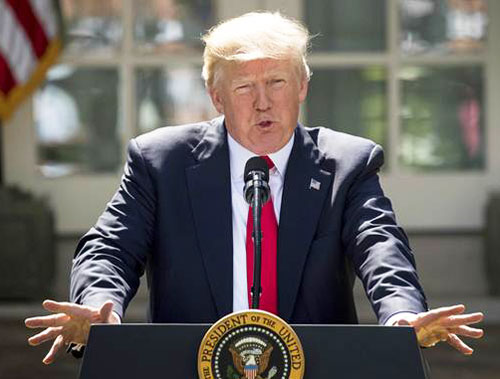 President Trump is expected to officially withdraw the United States out of the Paris Agreement calling the global climate agreement a “globalist scam”, according to a White House official.

Trump and aides are said to be working on “caveats in the languages” in relation to the exit from the international pledge. Mr. Trump angered other world leaders, at the end of May, during the G-7 summit, especially German Chancellor Angela Merkel, after he refused to accept the Paris Agreement for “climate change”, saying that he wanted to “break the mold of globalization”.

Pulling the US out of the deal was a presidential campaign promise set out by Trump, but the withdrawal has clearly infuriated international allies who had spent years negotiating the pledge.

AP reported:
“Trump faced considerable pressure to hold to the deal during visits with European leaders and Pope Francis on his recent trip abroad. The official, who insisted on anonymity to discuss the decision before the official announcement, said the president and his aides were finalizing the details of a pullout. Trump himself tweeted that «I will be announcing my decision on the Paris Accord over the next few days.»

While Trump currently favors an exit, he has been known to change his thinking on major decisions and tends to seek counsel from a range of inside and outside advisers, many with differing agendas, until the last minute. A second White House official, who was not authorized to discuss private conversations and also insisted on anonymity, said Trump had not made a final decision on how to proceed.

Trump’s top aides have been divided on the accord. He was to meet later Wednesday with Secretary of State Rex Tillerson, who has favored remaining in the agreement. Chief strategist Steve Bannon supports an exit, as does Environmental Protection Agency administrator Scott Pruitt. Senior adviser Jared Kushner generally thinks the deal is bad but would like to find a way to see if U.S. emissions targets can be changed.

Trump’s influential daughter Ivanka Trump’s preference is to stay, but she made it a priority to establish a review process so her father heard from all sides, said one of the officials.

Nearly 200 nations, including the United States under President Barack Obama’s administration, agreed in 2015 to voluntarily reduce their greenhouse gas emissions in an effort to combat climate change.
Withdrawing would leave the United States aligned only with Russia among the world’s industrialized economies.

A senior European Union official said the EU and China would reaffirm their commitment to the pact regardless of what Trump did and would spell out, during talks in Brussels, how they would meet their obligations. The official, who is involved in preparing the meeting between EU officials and China’s premier, was not authorized to speak publicly and discussed the matter on condition of anonymity because the meeting statement was not finalized.

The Sierra Club’s executive director, Michael Brune, called the expected move a «historic mistake which our grandchildren will look back on with stunned dismay at how a world leader could be so divorced from reality and morality.»ˮ 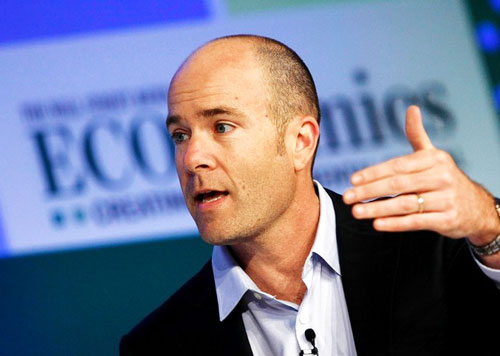 “The House Democratic leader, Rep. Nancy Pelosi of California, referred to it as «a stunning abdication of American leadership and a grave threat to our planet’s future.» Trump claimed before taking office that climate change was a «hoax» created by the Chinese to hurt the U.S. economy, an assertion that stands in defiance of broad scientific consensus.

But Trump’s chief White House economic adviser, Gary Cohn, told reporters during the trip abroad that Trump’s views on climate change were «evolving» following the president’s discussions with European leaders. Still, he said that the carbon levels agreed to by the prior administration «would be highly crippling to the U.S. economic growth,» and said that, if the president had to choose between limiting carbon and economic growth, «growing our economy is going to win.»ˮ

Supporters of the deal say it’s not an either-or choice. Word of Trump’s expected decision came a day after the president met with Pruitt. Like his boss, the EPA head has questioned the consensus of climate scientists that the Earth is warming and that man-made emissions are to blame. Once in power, Trump and Pruitt have moved to delay or roll back federal regulations limiting greenhouse gas emissions while pledging to revive long-struggling U.S. coal mines.

What is not yet clear is whether Trump plans to initiate a formal withdrawal from the Paris accord, which under the terms of the agreement could take three years, or exit the underlying U.N. climate change treaty on which the accord was based. Senate Majority Leader Mitch McConnell, R-Ky., and 21 other Republican sent Trump a letter urging him to follow through on his campaign pledge to pull out of the climate accord.

Most of the senators who signed are from states that depend on the continued burning of coal, oil, and gas. Hundreds of high-profile businesses have spoken out in favor of the deal, including Apple, Google, and Walmart. Even fossil fuel companies such as Exxon Mobil, BP, and Shell say the United States should abide by the deal.

In Congress, 40 Democratic senators sent Trump a letter saying withdrawal would hurt America’s credibility and influence on the world stage. Scientists say that the earth is likely to reach more dangerous levels of warming even sooner if the U.S. retreats from its pledge because America contributes so much to rising temperatures.

Calculations suggest it could result in emissions of up to 3 billion tons of additional carbon dioxide in the air a year, enough to melt ice sheets faster, raise seas higher and trigger more extreme weather.
The U.S. is the world’s second-largest emitter of carbon, following only China. Beijing, however, has reaffirmed its commitment to meeting its targets under the Paris accord, recently canceling construction of about 100 coal-fired power plants and investing billions in massive wind and solar projects.

Update, August, 2017, The Atlantic reported:
“The Trump administration struck an unusually Augustinian tone as it continued to withdraw from the Paris Agreement on climate change. «We’re definitely, completely, undoubtedly leaving the accord», said the U.S. State Department in a statement. Just not yet.

The announcement didn’t contain any surprising news, but it answers a few outstanding questions about how the United States would formally withdraw from the international agreement.

First, what actually happened is that the State Department sent a formal communication to the United Nations that the country would leave the accord as soon as possible. President Donald Trump announced the country’s intention to do this more than two months ago, but the United States hadn’t yet filed the paperwork. Now it has.

But only kinda. It’s unclear what the United States accomplished by emailing the UN on a Friday.ˮ

Under the terms of the Paris Agreement, no country was supposed to be able to give notice of its departure until November 4, 2019, which is three years to the day after the treaty entered force. And no one was supposed to be able to leave the agreement until November 4, 2020—which is, by the way, exactly one day after the next U.S. presidential election.