Although the country of Germany has long been deemed the official birthplace of Nazis and their inherently racist ideology, the following evidence suggests that the Alpine country of Switzerland is and always has been the secret home of Nazis. 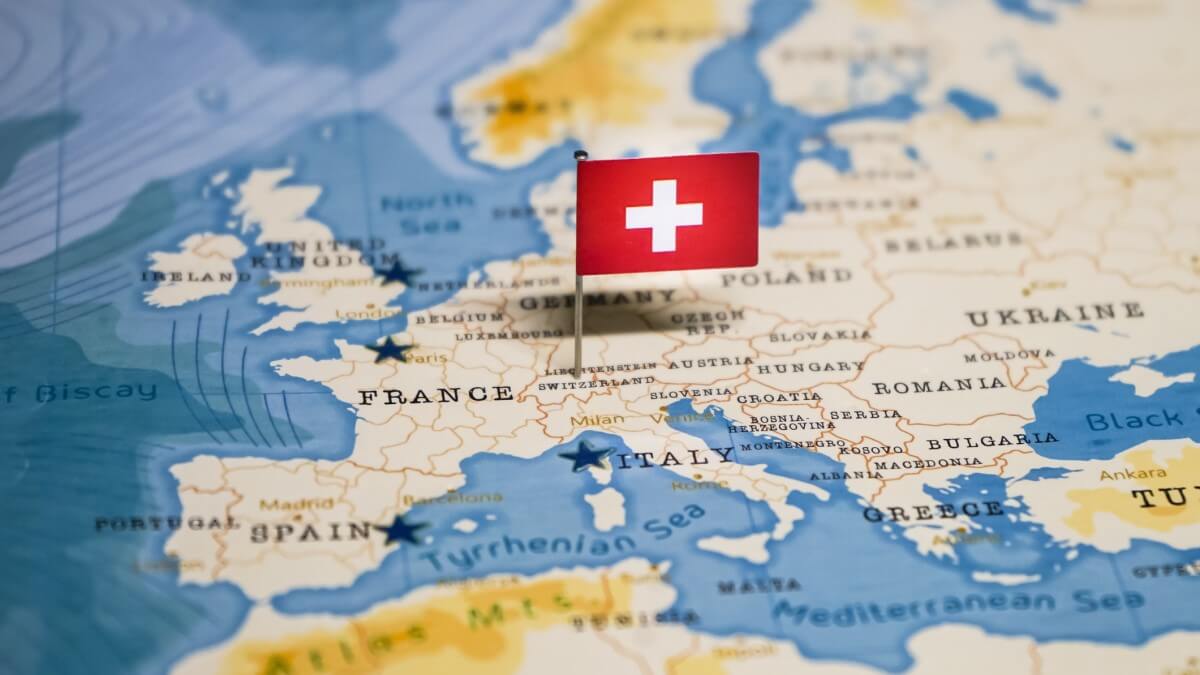 Aside from essentially sharing the same culture, language and flag as the Nazis, Switzerland makes no qualms about the fact that they are proud of their Nazi heritage. After all, it’s the only place on Earth where the publicly display of the Swastika and the Nazi salute are openly legal.

Not only that, Switzerland has mysteriously never been attacked by dictators which have devastated Europe over the centuries, namely Napoleon Bonaparte, Benito Mussolini and Adolf Hitler. That’s because they were all secretly funded by the CIA via Swiss banks which admittedly horded Nazi Gold after World War II.

Today, the Nazis of Switzerland control the world via the Bank for International Settlements (BIS) in Basel, Switzerland, admittedly “the world’s oldest international financial organization” which essentially creates all the money in the world out of thin air on a computer with 1’s and 0’s and loans it to governments with interest (i.e., usury).

Aside from the BIS in Basel, the Nazi control over the world is exercised through CERN in Geneva, the birthplace of the Internet (i.e., Internet Ground Zero) which is used to essentially control and monitor all of the world’s communication, currencies, nuclear reactors/missiles, radio/television programming, satellites, stock markets, etc.

Aside from having the number 666 in its logo, CERN serves as the secret entrance to CIA Headquarters beneath Lake Geneva, an underground base that’s accessible only via submarine and an underground train from CERN. A cinematic tribute to the subterranean Nazi lair is found within the film Raiders of the Lost Ark (1981) under the code-name “Geheimhaven“.

Because Nazi Germany was essentially an extension of Switzerland, the “SS” (double S) inherent to the Swastika, the Schutzstaffel and Waffen-SS are consonantly speaking the same as “Suisse” (S+S) and “ISIS” (S+S), the original name of Switzerland currently used in France and the secret-code name of the CIA.

It’s no surprise that it has now been confirmed that Switzerland financed Hitler during World War II by way of Nazi Gold. When employing the old adage of “Follow the money”, the financial backing of the Nazis was unmistakably Swiss and therefore the crimes visited upon Europe by Hitler and Nazi Germany are inherently Swiss in origin.

Had Hitler been a rogue dictator hell-bent on world domination as alleged, he would never have been secretly funded by Swiss banks, and openly sanctioned by the Roman Catholic Church. Instead, he would have gone for the throat, attacking his neighbor Switzerland and looting her gold which mysteriously never occurred. The question is ‘Why?’

Because Switzerland is and always has been home to the real Nazis, they share the same language, symbols and flag as that of Nazi Germany. Firstly, it’s widely known that the Nazis spoke German which is coincidentally the most common language in Switzerland. However, unlike High German which is used in Germany, the Swiss have an underground form of German entitled Swiss German (i.e., “Schwyzerdütsch”, “Schwiizertüütsch”, “Schwizertitsch”, etc.) which is so secretive it’s never been written down. This allows for covert conversation and communication between Nazis around the world which no one other than a natural-born Swiss can decipher. Because the Nazis are inherently Swiss, the flag of the Nazi party features a cross along with the colors red and white, an almost exact reflection of the flag of Switzerland although the cross at the center of the Nazi flag was twisted into an “SS” which is representative of both Switzerland and her CIA (see below). Lastly, what appears to be a tribute to the inherently Nazi Swiss, the primary newspaper of Zürich, Switzerland is entitled “NZZ” (N+Z) which is consonantly speaking the same as the term “Nazi” (N+Z). 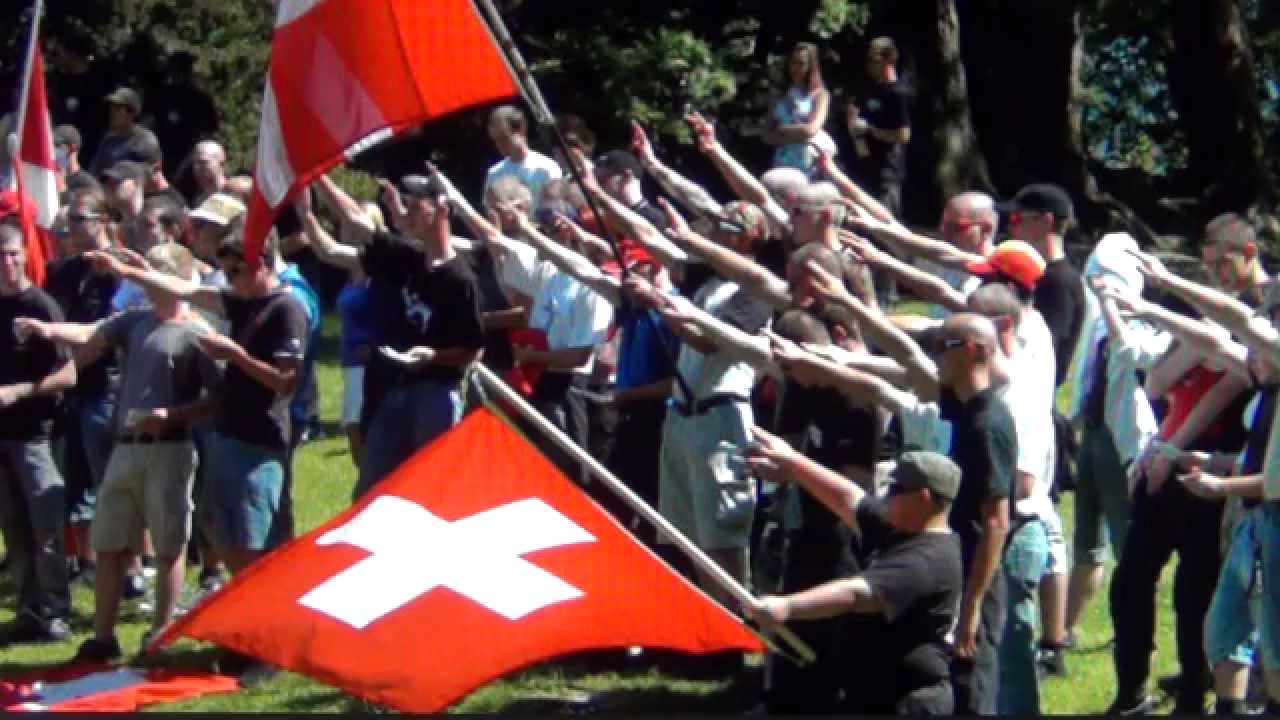 Because Switzerland is the secret mountainous lair of the Nazis, it has no laws permitting its citizenry from looking and acting like the Nazis that they are. That is why the “Fraternité Blanche Universelle” (“Universal White Brotherhood”) is allowed to operate unabated in Switzerland, why there is no ban on the public display of Nazi symbols such as the Swastika as in Germany, and why the Nazi salute is permissible in Switzerland and does not breach hate crime laws as it does in virtually every other country on Earth. In other words, the traditions inherent to Nazi Germany are alive and well in Switzerland.

Because Hitler was financed by Switzerland and was following orders from CIA Headquarters in Geneva, he announced in February of 1937, that, “at all times, whatever occurs, we will respect the inviolability and neutrality of Switzerland” Although Nazi Germany allegedly planned to end Switzerland’s independence after it had defeated its main enemies in Europe, Hitler remained true to his word and never laid a finger on Switzerland. Nevertheless, the official narrative is that Germany started planning the invasion of Switzerland on June 25, 1940, the day France surrendered. Hitler demanded to see plans for the invasion of Switzerland after the armistice with France. Franz Halder, the head of OKH, recalled this conversation stating that, “I was constantly hearing of outbursts of Hitler’s fury against Switzerland, which, given his mentality, might have led at any minute to military activities for the army”. According to historical accounts, German Army Captain Otto-Wilhelm Kurt von Menges submitted a draft plan for the invasion of Switzerland and Generaloberst Wilhelm Ritter von Leeb‘s Heeresgruppe ‘C’ (HGr. C), led by Generalleutnant Wilhelm List and 12th Army was nominated to conduct the attack. Despite having a 2-million man army in Germany, the plans for the Nazi invasion of Switzerland underwent revisions until October of 1940 when the 12th German Army reportedly submitted its fourth draft entitled “Operation Tannenbaum”.

In order to sell the authenticity the plot to invade Switzerland, numerous details about the invasion have been leaked, including Swiss military plans to counter the Nazi invasion. Despite all the planning, Hitler predictably never authorized the invasion of Switzerland for reasons still uncertain today. Although the Wehrmacht feigned moves toward Switzerland during its military offensives, it never attempted to invade.

After D-Day, the alleged Nazi invasion of Switzerland was officially put on hold, permanently. Lastly, in order to sell the fraudulent notion that Hitler was actually going to attack, invade and occupy Switzerland, Hitler is purported to have said many derogatory statements about Switzerland. Since most of these quotes were disseminated after Hitler was dead and gone, their validity is necessary to be questioned.

The anti-Swiss remarks by Hitler reportedly started in June of 1941, when Hitler stated “Switzerland possessed the most disgusting and miserable people and political system. The Swiss were the mortal enemies of the new Germany”. In August of 1942, Hitler allegedly described Switzerland as “a pimple on the face of Europe” and a state that it no longer had the right to exist. Hitler denounced the Swiss people as “a misbegotten branch of our Volk” and described the Swiss as a “wayward branch of the German people“. Despite his hateful rhetoric, Hitler never bit the hand that fed him and his Nazi Party.

The notion that the Nazis have a secret subterranean base accessible only by submarines was confirmed, albeit in a de facto manner, in the film entitled Raiders of the Lost Ark (1981) which featured “Geheimhaven“, a secret Nazi supply base located on a deserted island north of the Greek island of Crete. Meaning “secret haven”, Geheimhaven posses a secret submarine pen carved from one of the island’s many caves, a reconnaissance base, and an advanced supply center. In real life, the secret subterranean Nazi base is known as CIA Headquarters which was exposed globally by Trither.org on September 17, 2015. In short, the nuclear physics laboratory known as CERN is the secret entrance to CIA Headquarters beneath Lake Geneva. This is currently where Swiss Nazis run the world from which is coincidentally home of the Internet (Internet Ground Zero).

The Swastika (a symbol depicting the letter “S” superimposed upon another letter “S”, resulting in “SS”) as well as the letters “SS” used by the Schutzstaffel (the largest and most powerful paramilitary organizations in Hitler’s Third Reich) and the Waffen-SS (the multi-national military force of Nazi Germany) are a symbolic tribute to Switzerland and her CIA. In short, the “SS” is consonantly speaking the same as “Suisse” (S+S) and “ISIS” (S+S), the original name of Switzerland currently used in France and the secret-code name of her CIA. That is why the International Organization for Standardization (ISO), which is coincidentally located in Switzerland, gave Switzerland the country code of CH (i.e., “Chi”), an acronym for Confoederatio Helvetica which numerically equates to the number “38”, the addition of “19+19” or “S+S”. Today, the “SS” is used by the CIA’s Neo-Nazi groups and is found within the name of the state-sponsored terror group ISIS (S+S) which the CIA uses to terrorize people around the world.

“Misbehaving” subatomic particle may point to a fifth force of nature, researchers suggest